The U.S. is drowning in laws, laws, and more laws. So says Philip K. Howard in his fast-paced “The Rule of Nobody: Saving America from Dead Laws and Broken Government” (ISBN-13: 978-0-393-08282-1). He calls for some common sense changes of attitude and makes a good case for constitutional amendments as part of the cure. 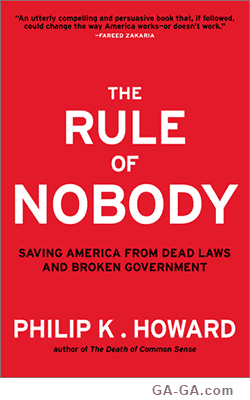 The emotional part of Philip K. Howard’s new book consists of several frightening, sad, and sometimes deadly examples of public servants not serving the public due to arcane mazes of legal statues that have accumulated over decades. In this way, Howard deftly establishes the need to reassess our system of laws. His excellent book, “The Rule of Nobody,” proudly bears the spot-on subtitle, “Saving America from Dead Laws and Broken Government.”

The necessity for common sense becomes clear almost immediately and it makes you shake your head in dismay. This vexing problem can, in some cases, become a matter of life-and-death, but even when dealing with drier matters such as building permits and public works projects, there are too many laws and rulings and decrees and restrictions, all providing too many ways to halt progress. It’s our own fault, of course, because it’s our government. But do we choose to do anything about it?

Howard gets to the “how” as well as the “why” in many instances, including the one that explains the title of the book:

America has created what philosopher Hannah Arendt called the “rule by Nobody”: a bureaucratic state that has taken a life of its own, without the ability to make vital choices to respond to current needs. Government, out of anyone’s control, is increasingly disconnected from the society it supposedly serves.

It is not a question of less government versus more government — it is a question of effective government. (That’s a sentence that needs to be tattooed on the forehead of every one of the oh-so-many rightwing nutjobs in Congress.) Too often, we do not make a distinction between undertakings that are complicated, such as surgical procedures or rocket science, and those that are complex, such as childrearing or running a system providing healthcare. Howard quotes Canadian management professor Brenda Zimmerman:

Complicated activities often require detailed organizational mechanisms, such as blueprints and checklists. Complex activities, by contrast, have “thousands of parts and players, all of whom must act in a fluid, unpredictable environment. To run a system that’s complex… it takes a set of simple principles to guide and shape the system.”

At a few points in the book, people die due to our convoluted laws and our blind allegiance to them (or because of our fear of being caught up in “the law” or some sort of bureaucratic nightmare). These horrific events include a drowning victim who was deemed to be outside the prescribed area of patrol and a nursing home resident not given CPR by staff members who simply waited for EMT workers to arrive (too late, as it turned out). In both instances, bystanders were just following “the rules.”

As Howard observes, “America is losing its soul. Instead of creating legal structures that support our values, Americans are abandoning our values in deference to the bureaucratic structures.”

One cause of this problem: “Laying everything out in detailed law is often comfortable… No one has to take responsibility for whether things actually work.” This is not what the framers of the Constitution had in mind. “Our founders sought to create a government run by wise men, accountable to the people. After the 1960s we created a government run by clerks and jerks, accountable to no one and empowered only to say no.”

Another cause of the problem is one that is oh-too-familiar to progressives: “… the game is rigged for powerful people and groups — aided by a system of campaign finance and electoral rules that gives the advantage to incumbent officials who promise to protect programs that benefit their supporters.”

But the result of that rigged game is often catastrophic, and Howard briefly touches on dozens of examples, including these: “Corporate irresponsibility was impossible to avoid: rivers so polluted that they caught on fire, and cars so misengineered that they rolled over on normal turns.” And what was the response when this treachery was pointed out? “GM sent corporate goons to trail Ralph Nader, further proof that no business could be trusted. Not only did we need regulatory oversight to guard against pollution and unsafe conditions, but we needed to put business in the blocks to make sure it didn’t squirm out of its obligations.”

Threaded through the book are Howard’s recommendations for bringing some sanity to our rule of law. These include “Compulsive distrust of human choice is anti-democratic” and “Judges must act as gatekeepers, dismissing invalid claims.”

But my favorite is this one: “No act of government is morally valid unless it can be justified as being in the common interest.” Wow — if that were adopted, ninety percent of the conservative agenda would shatter into dust. What an amazingly better-off country we would be at that point!

Howard concludes with what he calls the Bill of Responsibilities, a quintet of proposed amendments to the Constitution. Included in his list of five solid ideas is a call for the establishment of a Council of Citizens to act as “an advisory oversight body on the workings of government.” Good luck. No, really — good luck with these five proposals and good luck to all of us. This book is a step in the right direction.

For more information about the book, visit: http://books.wwnorton.com/books/detail.aspx?id=23126

The post Book Review: Who’s in Charge of Our Laws? ‘Nobody’ appeared first on MuseWire.