Humanity triumphs on every page of Elizabeth Warren’s “A Fighting Chance” (ISBN: 9781627790529). Her life story is inspirational but it’s her goals — fairness, a level playing field, justice — that are crucial to our country’s future. 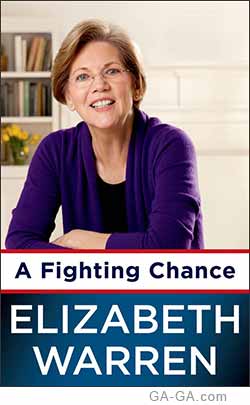 True patriotism is displayed in many ways. For Elizabeth Warren, the senior senator from Massachusetts, it shows in her battles on behalf of the vast majority of Americans who are not millionaires. It shows in her effort to obtain accountability from multi-national corporate financial giants. And it shows in her pride of kin and country:

I will be grateful to my mother and daddy until the day I die. They worked hard — really hard — to help my brothers and me along. But we also succeeded, at least in part, because we were lucky enough to grow up in an America that invested in kids like us and helped build a future where we could flourish.

Moving forward with every tool at her disposal — legislation, position papers, speeches, presentations, and this book — Warren takes on the true mantle of modern-day reformist. Unlike the kind of people who say “I’ve got mine,” she continually combats the conservative cabal that wants to avoid investing in kids, schools, homes, roads, vets, and the middle class. She is firmly on the side of citizens, not corporations.

In this time of Politic$, there is no more refreshing voice of reason than Elizabeth Warren.

The opening four pages of Chapter One read like the start of a novel. If you have a heart, you will be moved by it. The devastation of a family by health and circumstance is seen through the eyes of 12-year-old Elizabeth and it may reduce you to tears. But this emotional turmoil serves as the foundation for the decisions Warren makes in her life — a life that has so far breathed pride and purpose back into many who embrace the progressive movement in America.

The chapters propel you along the journey with a lovely use of language, aided by nifty subheads like “When ‘Dead Broke’ is a Step Up,” “The People No One Heard,” “Blood and Teeth on the Floor,” and “A Champion for the People” (which could serve as her job title).

At one point, she is looking at statements made by people filing for bankruptcy after the start of the Bush Recession. “Some of the stories were detailed and sad, describing the death of a child or what it meant to be laid off after thirty-three years with the same company.” She puts herself in their shoes:

It is uplifting to read simple declarative sentences that pack such a punch, especially when they’re from someone with empathy. She has the human virtue of compassion, something that is entirely missing from conservatives (and is also all-too-rare even among the non-treasonous party). The ability to see, comprehend, and be moved is one hallmark of humanity.

Again and again throughout the book, Warren writes about the ways vested interests attack the truth in underhanded ways. She recounts bald-faced lies from almost every encounter with republicans, including Scott Brown (now running for the Senate in New Hampshire) and Neel Kashkari (now running for governor in California), but I guess we’re supposed to expect that from members of the party of perfidy.

She also has to contend with well-funded lies from entire industries — as when Warren was fighting onerous bankruptcy legislation sponsored by the big money interests:

The banking industry bought everything: they even bought their own facts. The industry commissioned three different studies, each of which was touted as “independent.” Each explained the urgent need to change the law — exactly the way the banking industry wanted it changed. One particularly damaging result of these bogus studies was a claim that bankruptcy cost every hardworking, bill-paying American family a $550 “hidden tax.” The number was entirely made up, fabricated out of thin air, but the press reported it as “fact” for years.

There are many touching vignettes about everyday Americans, including Flora, an elderly widow, who had been guided into a new mortgage by a sweet-talking bank salesman. The rates were low at first but then shot up because of the Republican financial mismanagement and Flora ended up living in her car. “That’s the real story behind the meltdown: the mortgage market sank, one Flora at a time.” Warren remembers Flora and others like her every time a banking industry stooge stands in the way of necessary industry regulation and reform.

Also in the book are well-crafted mini-overviews of recent events like the housing mortgage crisis, the financial industry disintegration, the lobbying game, and the whole “too big to fail” scenario. News media editors and program producers would do well to read these pages because Warren’s summaries are superb.

Her reasoning for the Consumer Financial Protection Bureau is beautiful, no more so than in this analogy:

Treat mortgages and other financial products like, well, products. No one expects a consumer to evaluate the wiring diagram for a toaster. I thought no one should expect a consumer to digest thirty pages of tiny print to evaluate every trick in a credit card agreement.

I proposed the creation of a new government agency, one whose sole mission would be to look out for consumers, and to serve as the cop on the beat who would make sure that financial companies follow some commonsense rules. People could still use mortgages and credit cards however they wanted, but the products themselves would be clear. No tricks hidden in the fine print, no traps buried in complex legalese.

Did this people-friendly idea lead to a huge battle with the greedwhores in the republican party? Oh you bet. Continually fighting against their disgusting and disgraceful actions, Warren keeps up the pressure using something that confuses conservatives: facts.  That she grounds her battles in truth doesn’t mean that emotion gets shunted aside:

What kind of people are we? What are our shared values? Many congressional Republicans think it’s fine to give billions of dollars in tax breaks to giant oil companies and corporations that park their money overseas, even as medical research budgets are hit by another round of cuts and care centers have long waiting lists. But those spending choices don’t reflect the values of the American people.

When confronted with one of the standard conservative lies that the GOP is “pro-business,” Warren gets right to the point by skewering republican intransigence and obstruction:

She caps off her position in a lovely and powerful way:

No, the real battle isn’t “pro-business vs. pro-government”; the real battle is whether everyone pays or just the little guys. Giant companies hire armies of lobbyists to craft custom-made tax loopholes. And it’s working: big corporations are paying an average tax of 12.6 percent of their profits, less than half of the advertised 35 percent corporate rate. Meanwhile, middle-class families and middle-size (and small) businesses are left to pick up the tab.

Progressives know this. Liberals know this. Moderates know this. Even the plutocrats in the know-nothing GOP know this. The problem is that large numbers of American voters do not yet seem ready to wake up to the truth.

Meanwhile, the rightwing hate machine tried its worst to smear their filth and bile over everything around them, attacking Warren and her family. “I knew politics was a rough business, but I had really hoped I’d be the only target. So far, the Republicans had denounced my dead parents, harassed my brothers, and attacked my daughter.” Typically, Warren only speaks of the facts of the matter rather than railing against the conservative perfidy. (I am not as good a person as Warren so I’m more than happy to call out the rightwing nutjobs for being douchebags.)

The moral strength of Elizabeth Warren is not in doubt but her overall toughness and resiliency often shines through in ways that bring a smile, as when the Huffington Post asked her if she would be willing to settle for a consumer protection agency that was subject to the kind of compromise republicans always aim for (when republicans say “compromise” they mean “gutting effective legislation”) —

In the bluntest possible terms, I said no. “My first choice is a strong consumer agency. My second choice is no agency at all and plenty of blood and teeth left on the floor…. My 99th choice is some mouthful of mush that doesn’t get the job done.” I said we should either stand and fight for something worthwhile or go get honest work somewhere else. I wanted nothing to do with a watchdog that could do nothing but whimper.

In political books, humor is often quite labored but this book is different. Warren’s genuine nature shines through in every paragraph. Such as:

For a wedding present, my mother had bought me a Betty Crocker cookbook, but cooking up those recipes day after day made me feel numb, and my attention often wandered. I gave us all food poisoning twice and set the kitchen on fire maybe four or five times. My daddy bought me a fire extinguisher for Christmas.

In other words, America is something we all build, together. Conservatives may always try to impede progress, thwart justice, and reduce equality, but they should always be called out on their greed and selfishness.

How we spend our money is about values, and it’s about choices. We could cut back on what we spend on seniors and kids and education, as the Republicans in Congress insisted we should. Or we could get rid of tax loopholes and ask the wealthy and big corporations to pay a little more and keep investing in our future.

Progressives like Elizabeth Warren are investing in our future. Are you?

Learn more about the book and author at: http://us.macmillan.com/afightingchance/ElizabethWarren .