Economics professor Richard Wolff regularly raises eyebrows with his clear-eyed explication of the many advantages of Marxism. Now, in “Democracy at Work: A Cure for Capitalism” (ISBN 9781608462476), he makes the case for curing some of capitalism’s ills via Workers’ Self-Directed Enterprises. It may sound like a pie-in-the-sky idea but it’s already successful on four continents. 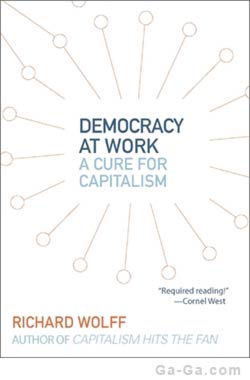 It’s not every day that a book outlines a practical plan to save the economic future of the United States, but “Democracy at Work: A Cure for Capitalism” is just such a volume. In fact, the cure outlined in this work — which revolves around Workers’ Self-Directed Enterprises — may have the ability to help heal economic rifts on a universal basis.

Indeed, WSDEs are already moving forward in some parts of the world. The Mondragon Corporation, based in Spain, is one such firm. (Actually, it is more widespread than that sounds because Mondragon is the hub of 289 companies and co-operative ventures and 15 technology centers; together they employ 80,000+ people on four continents.)

Wolff begins his presentation with the dire situation faced by capitalism in the 1930s, when there was a massive movement that prefigured our recent Occupy Wall Street actions. It the twentieth-century situation, the popular crusade was co-led by the Congress of Industrial Organizations (the CIO of the more familiar AFL-CIO). Their protests influenced then president Franklin Delano Roosevelt (FDR) to act on behalf of the people rather than the rich and powerful:

Together, the CIO, socialists, and communists made it impossible to continue policies that “managed” the Great Depression by bailing out the banks and major corporations, keeping government economic intervention otherwise minimal, and leaving the unemployed and foreclosed basically unassisted. At the same time, the CIO, socialists, and communists brought millions into the streets shaking their fists. They criticized business and capitalism more and more intensely. Those actions prompted and enabled FDR to present big business and the richest citizens (the business and power elite that included his own family) with a plan.

The plan involved something that is absolutely necessary again today: higher taxes on business and the rich. That this approach was successful on a massive scale seems lost on every current RWNJDB (rightwing nutjob douchebag) and even some lily-livered democrats. What emerged from that period of combatting capitalistic contraction were just a few little advances such as social security, unemployment insurance, federal infrastructure work programs, and much more; it wasn’t just a catchy name — it truly was a New Deal for Americans.

Threading through the book is the sad story of conservative forces attacking, undermining, and chipping away at the American triumph as realized in the New Deal.

Big business subordinated smaller capitalists when it did not overtake them. Laws protecting labor and labor unions were weakened, repealed, or simply not enforced. Freedom came to be redefined as first and foremost the freedom of businesses to decide what, where, and how to produce without interference from other parts of society. The results of so long-lasting a bar on serious criticism and debate of the capitalist system are many and sobering. They include the return to levels of inequality of wealth and income typical a century ago; consequent inequality in the distribution of political power and access to culture; atrophy of government-provided social services and supports; and multidimensional ecological crises.

Writing about public versus private ownership and distribution, Wolff points out that reality is far different from what RWNJDBs label — with moronic shrieks and moans — as socialistic. “Reorganizing production so that workers become collectively self-directed at their worksites moves society beyond both capitalism and the last century’s actually existing socialisms and communisms.” One important point to remember is that the U.S. already is a democratic-socialist nation with “significant amounts of productive property and products owned by state apparatuses in the name of the society as whole. In the United States, for example, harbors, air space, transportation facilities, military equipment, large tracts of land, and many educational institutions are publically owned.”

Workers’ Self-Directed Enterprises, already proven to be successful in small and medium-size enterprises, offer the possibility of transforming society while giving much more power to those who are actually engaged in performing the work.

In WSDEs, decisions about production and distribution of outputs no long primarily serve small subgroups (receivers of profits, dividends, and capital gains) rather than the majority of workers and their communities. Social criteria — democratically determined by self-directed workers and community members — would replace the drive for profit and accumulation in investment and all other economic decisions.”

The result is a more equitable relationship; the overall result is much more democratic. What gets destroyed is “the capitalistic class structure (employers exploiting wage laborers)” which is a great benefit to society (but something that strikes terror into the atrophied hearts of conservatives and their plutocratic masters).

In addition, this alternative way of thinking about the financial picture might help get Americans to avoid their current use of socialism on behalf of the well-off, such as the Fed subsidizing JPMorgan Chase to purchase Bear Stearns and loaning $85,000,000,000 to AIG. “The Fed poured huge sums into buying debt and mortgage-backed securities from Fannie Mae, Freddie Mac, and Ginnie Mae, the major government supports for the US housing industry, which were eventually taken over by the US government” as well as moving “trillions of dollars of bad assets off of private financial enterprises’ balance sheets and onto those of the Fed and the US Treasury.”

Wolff gets right to the point about all that: “In short, the United States mobilized many of its financial and monetary agencies to massively socialize its monetary system.” He also laments how, “After years of speeches celebrating private enterprise as the engine of growth and prosperity and denouncing government as the source of economic inefficiency and waste, those CEOs led the rush to Washington for trillions in assistance.”

When Socialism is Capitalism

One of the most fascinating aspects of the book is the explanation of how “socialism” as screeched by conservatives and dictators alike is, in reality, just a variant of capitalism:

Neither socialism nor communism advocated or put in place the noncapitalist economic system I have described in this book as workers’ self-directed enterprises. However much they wanted to or thought they had, they did not take society beyond capitalism to an alternative system…. Socialists and communists moved from private to state forms of capitalism.

Call to the Polls

Wolff admonishes the people, the workers, to demonstrate “active democratic participation as residents in the governance of their local and regional communities.” Ultimately, we have the power to combat the ills of capitalism. We have the ability to rid ourselves of the oligarchs and plutocrats of the current political scene. Would that this peaceful revolution would soon begin.

Heavy Going but Worth It

The book is fairly short but can be a bit of a slog because of Wolff’s sometimes turgid writing style. Here’s one example: “If there was a ‘moral hazard’ that bailing out big banks during and after 2008 might weaken their resolve to avoid excess risk thereafter, then allowing big banks to become bigger accelerated the moral hazard involved.” Okay, the meaning is apparent despite taking a rather torturous route to make the point. But it gets worse: “However, Marx’s surplus analysis as a basis for differentiating capitalism and socialism never acquired the centrality that property ownership (private versus public) and resource and product distribution (market versus planning) did in the nearly universally shared definition/differentiation of both systems.” You can determine meaning after more than one read-through but sheesh, it sure would be more convenient if such a brilliant thinker was a better writer.

Still, “Democracy at Work” is ultimately exciting because it just may represent tomorrow’s economic panacea for the obvious ills of capitalism.