Glenn Greenwald’s excellent “No Place to Hide: Edward Snowden, the NSA, and the U.S. Surveillance State” (ISBN: 9781627790734) is not only about Edward Snowden and the NSA; it’s also about power. Who gets to watch you? Who gets to know your life’s decisions? Who gets to monitor your activities? And who is watching the watchers? 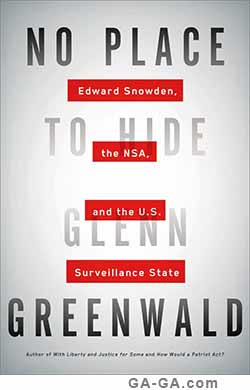 Using increasingly sophisticated hardware and software, the United States surveillance community has the ability to find and track almost anyone in the modern world. Yay! Go team! USA, USA, USA!

Uh, but wait a second. That means that all our private lives have become vulnerable to scrutiny. When it comes to the National Security Agency (NSA) we can say: They seek, they find. They see, they know. Decisions you make in your life have now become data for computer algorithms to analyze. Activities you engage in have now become fodder for someone else to scrutinize.

If the surveillance community wanted to do so, they could see you reading this sentence. They could check your reaction to this review, judged by whether you finish reading it, share it, or post a comment about it. (Hey, since they know anyway, why not post a comment that tells them what you think about their spying?)

Early on in “No Place to Hide,” investigative reporter, lawyer, author, and activist Glenn Greenwald sets the stage for much of what is to come:

Will the digital age usher in the individual liberation and political freedoms that the Internet is uniquely capable of unleashing? Or will it bring about a system of omnipresent monitoring and control, beyond the dreams of even the greatest tyrants of the past? Right now, either path is possible. Our actions will determine where we end up.

Who Ya Gonna Spy?

The brouhaha is over the documents released by Edward Snowden, formerly of the CIA (Central Intelligence Agency) and the NSA. Because of these leaks, we can now see that the intelligence communities of many nations are involved in a whole big batch of data sharing. Working together are the “Five Eyes,” the U.S., U.K., Canada, Australia, and New Zealand.

Ironically, nations who are targets of our spying are also recipients of data from our spying, which brings to mind the “Spy vs. Spy” Mad Magazine cartoons by Antonio Prohias and (later) Peter Kuper. But the main focus of the debate is about the power that results from collecting massive amounts of data:

Ultimately, beyond diplomatic manipulation and economic gain, a system of ubiquitous spying allows the United States to maintain its grip on the world. When the United States is able to know everything that everyone is doing, saying, thinking, and planning — its own citizens, foreign populations, international corporations, other government leaders — its power over those factions is maximized. That’s doubly true if the government operates at ever greater levels of secrecy. The secrecy creates a one-way mirror: the US government sees what everyone else in the world does, including its own population, while no one sees its own actions. It is the ultimate imbalance, permitting the most dangerous of all human conditions: the exercise of limitless power with no transparency or accountability.

Greenwald’s view is forcefully made throughout the book, as when he writes that Edward Snowden’s actions are “shining a light on the system and how it functions. For the first time, people everywhere were able to learn the true extent of the surveillance capabilities amassed against them.”

Wait, what? Yes, many of those firms are recognized by the NSA as being in “strategic partnerships” with the intelligence-gathering agency.

Your government thanks you.

Enlightening but alarming, the book is fast-paced except in one small aspect: To read some of the NSA documents in this Snowden-to-Greenwald-to-the-world progression, we must unfortunately enter into the WOA (world of acronyms).

In addition to NSA and CIA, we also encounter the British GCHQ (Government Communications Headquarters), CSEC (Communications Security Establishment Canada), FISA (Foreign Intelligence Surveillance Act), and a dictionary full of others. For example, one of the documents quoted in the book begins “(S//SI//REL TO USA, CAN) SIGINT: NSA and CSEC.”

Three Stories in One

There are multiple storylines in “No Place to Hide.” First is the author’s interaction with Edward Snowden, the former government computer systems professional who gave hundreds of classified documents to journalists he trusted — with the idea that they would confirm the facts and selectively publish those files that exposed the extent of governmental spying activity being conducted without public knowledge.

The Snowden story is compelling, especially considering the whole “spy who spied on the spying” aspect of the events. It sometimes seems that a bit too much time is spent on Snowden’s motives but perhaps this is necessary considering how the man has been vilified in some circles.  And besides, the questions are relevant: “What had really driven Snowden to throw away his career, turn himself into a potential felon, and breach the demands of secrecy and loyalty that had been drummed into his head for years?” The answers, as reported by Greenwald, are clear, high-minded, and inspiring.

The second story is the freaked-out media and pundit reaction to Snowden (for absconding with the documents) and to Greenwald (for writing about and publishing a portion of the documents). As you can imagine, these run the gamut from “traitor” to “savior.”

There isn’t even agreement as to the whistleblower status of Snowden. Plus, some scurrilous elements of the media (hello Fox Fake News) seem willing to broadcast any incendiary rumor no matter how unfounded. Not to mention the foolishness of the blatantly spineless “Meet the Press” host, David Gregory (he’s the tall clown awkwardly dancing in Karl Rove’s “rapping” segment at a White House Correspondents dinner; and again dancing awkwardly as PSY lip-synced his “Gangnam Style” on one of the namby-pamby morning shows). Other embarrassing reactions by so-called respected members of the broadcast and print media are included — I would say for comedic relief except that their journalistic lapse is so very serious.

But there is a third tale in the book and it has to do with what we — as people, as American citizens, as citizens of the world — are to make of the size and scope of the surveillance. Just a short time ago, I wrote in my “Area Code 666” novel that every electronic gadget in your home, car, and office was an eavesdropping device. I thought this was a fine example of horror/science-fiction. It may be horrific and it involves science but apparently it is not fiction.

Greenwald expertly covers the issues and questions raised by the material Snowden liberated from the NSA files, including: What do we think about all of the data collection? What should we do about it? Can we do anything about it? Who gets to judge the boundary lines for intelligence-gathering? And who judges the judges? In this regard, “No Place to Hide” is one of the most important books of the decade.

And for those who are siding with the government versus Snowden and/or Greenwald, it would be a good idea to remember this:

There are things missing from the physical book: the index and footnotes. But they do exist and are available at www.glenngreenwald.net along with clearer images of NSA documents reproduced throughout the book. This “see us online” approach is something that may become the norm in physical book publishing. Like a lot of things in life, there are two equally valid reactions to this: on the one hand it’s annoying to have the information apart from the text; on the other hand it’s great to avoid page-length restrictions on the amount of data that accompanies a publication.

Okay, that’s my review. Thanks for reading. And thanks to Walter, the NSA operative who is monitoring my online activity. Bye-Spy for now!

The post Book Review: We Have ‘No Place to Hide’ appeared first on MuseWire.