Robotics, politics, and economics — they’re coming to take your job. That’s just one warning in “Rise of the Robots: Technology and the Threat of a Jobless Future” (ISBN: 9780465059997), Martin Ford’s quietly frightening book that’s actually more about economics than robotics. 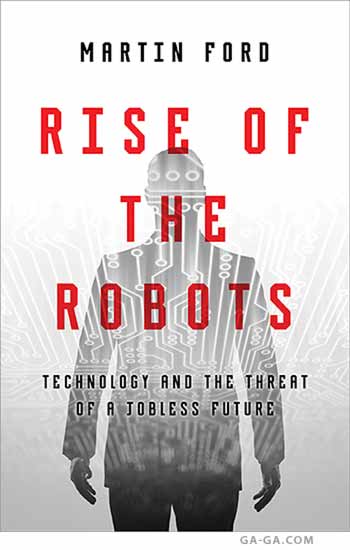 Score one for the marketing folks at Basic Books, publishers of Rise of the Robots, a volume that’s more about the political and social pathways to universal health care, guaranteed income, and economic reform than about automatons. And, at the risk of losing most readers right here in my opening paragraph, it must be noted that there’s nothing in the book about sex-bots at all.

Author Martin Ford has gathered a ton of data and he distills it all for us in powerful phrases that create an ominous feeling about the recent past and the not-to-distant future. Consider:

* “As of 2013, a typical production or nonsupervisory worker earned about 13 percent less than in 1973 (after adjusting for inflation), even as productivity rose by 107 percent and the costs of big-ticket items like housing, education, and health care have soared.”

* Machines used to be “tools that increase the productivity of workers” but now “machines themselves are turning into workers, and the line between the capability of labor and capital is blurring as never before.”

* “Regardless of the specific technological path ultimately followed by the retail industry, it’s difficult to imagine that the eventual result won’t be more robots and machines — and significantly fewer jobs for people.”

Early in the book, Ford writes about Martin Luther King’s sermon in which he addressed the extraordinary forces facing our nation and the world. The situation is what King called a “triple revolution” of technology, weaponry, and human rights. It’s a compelling section and a part of MLK’s message with which I had not been familiar.

Stepping off from that point — and bringing us all up to date at the same time — Ford then discusses what he terms the “Seven Deadly Trends,” including stagnant wages, the profiteering of corporations, joblessness, and wealth inequality. Unfortunately, robotics does not appear poised to help resolve these depressing developments.

Just one example: “In an analysis published in September 2013, economist Emmanuel Saez of the University of California, Berkeley, found that an astonishing 95 percent of total income gains during the years 2009 to 2012 were hoovered up by the wealthiest 1 percent.”

If common ground is ever reached by the majority of this country, the plutocrats and oligarchs better watch out (although by then they will be armed with robotic security forces of deadly intensity).

A surprising amount of the book is a clear-eyed and welcome assessment of the mess conservatives have made of our economy and our government.

In their 2010 book Winner Take All Politics, political scientists Jacob S. Hacker and Paul Pierson make a compelling case for politics as the primary driver of inequality in the United States. Hacker and Pierson point to 1978 as the pivotal year when the American political landscape began to shift under a sustained and organized assault from conservative business interests. In the decades that followed, industries were deregulated, top marginal tax rates on the wealthy and on corporations were cut to historic lows, and workplaces were made increasingly inhospitable to union organization.

At first these truths seem out-of-place in a book about the mechanization of our present and future but Ford ties it all together: “The hollowed-out middle of the already polarized job market is likely to expand as robots and self-service technologies eat away at low-wage jobs, while increasingly intelligent algorithms threaten higher-skill occupations.” In other words, the evil perpetrated by conservatism might be compounded by the advance of robotics.

Ford often sends cold chills up and down your spine: “Big data and predictive algorithms have the potential to transform the nature and number of knowledge-based jobs in organizations and industries across the board.”

As top managers increasingly employ data-driven decision making powered by automated tools, there will be an ever-shrinking need for an extensive human analytic and management infrastructure. . . Organizations are likely to flatten. Layers of middle management will evaporate, and many of the jobs now performed by both clerical workers and skilled analysts will simply disappear.

“In 2013, researchers at the University of Oxford’s Martin School conducted a detailed study of over seven hundred US job types and came to the conclusion that nearly 50 percent of jobs will ultimately be susceptible to full machine automation.”

There is much to admire in the book. Not only the attack on the evil that is conservatism but also observations about changes in our health care system being harder to effect than in our fast food system. “…lower prices and improved productivity in health care will likely lead directly to better and longer lives. Cheaper fast food may well do the opposite.”

He has solid recommendations to help society:

The fact that Medicare is relatively effective at controlling most patient-related costs, while spending far less than private insurers on administration and overhead, underlies the argument for simply expanding the program to include everyone and, in effect, creating a single-payer system. This has been the path followed by a number of other advanced countries — all of which spend far less on health care than the United States and typically have better outcomes according to metrics like life expectancy and infant mortality.

Ford also sees the need for investment in education, infrastructure, and the social safety net; for the expansion of the Earned Income Tax Credit; and for more taxing of capital versus the taxing of labor.

The premise that even modestly higher marginal tax rates on top incomes will somehow destroy the impetus for entrepreneurship and investment is simply unsupportable. The fact that both Apple and Microsoft were founded in the mid-1970s — a period when the top tax bracket stood at 70 percent — offers pretty good evidence that entrepreneurs don’t spend a lot of time worrying about top tax rates.

And as usual, he pulls his main topic back in:

Likewise, at the bottom, the motivation to work certainly matters, but in a country as wealthy as the United States, perhaps that incentive does not need to be so extreme as to elicit the specters of homelessness and destitution. Our fear that we will end up with too many people riding in the economic wagon, and too few pulling it, ought to be reassessed as machines prove increasingly capable of doing the pulling.

Robots in the home, in the workplace, on the road, in stores, in the skies, in health care facilities — wherever you are, they are coming to get you and the results may not be pretty:

As jobs evaporate and median incomes stagnate — or perhaps even fall — we run the risk that a large and growing fraction of our population will no longer have sufficient discretionary income to continue propelling vibrant demand for the products and services that the economy produces.

How we cope may depend on how efficiently we can eradicate conservatives and how quickly we can stamp out — or at least marginalize — the Republican Party. Otherwise, good and decent people will not only be damning every rightwing nutjob, they’ll also be reduced to shouting “Klaatu barada nikto” at every intrusive ‘bot they encounter.

VIDEO: Excerpt from a BookTV interview with Martin Ford —

The post Book Review: ‘Rise of the Robots’ – They’re coming to take your job! appeared first on MuseWire.