Richard Nixon embodied nearly everything that is evil about Conservatives, and then he added alcoholism and paranoia to the mix. In Tim Weiner’s “One Man Against the World: The Tragedy of Richard Nixon” (ISBN: 9781627790833), the revelations from Nixon’s recently-released secret tapes go beyond the deceitfulness we already knew about Tricky Dick. 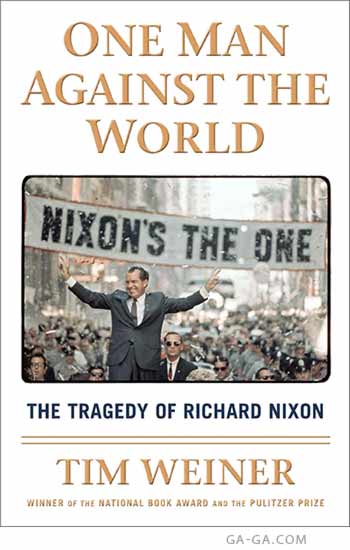 When enlightened people are asked what personal attributes they want in a political leader, the list might include humanity, humility, kindness, empathy, impartiality, thoughtfulness, practicality, morality, and strength of character.

Obviously, none of those traits are found in Conservatives but the case of Richard Milhous Nixon is a special one. (Almost as special as the seventeen open sores currently vying for the Republican presidential nomination. But that story is being covered in other columns.)

To the nation’s shame, Nixon served as the 37th president of the United States. His lack of anything resembling human decency was astonishing: paranoia and megalomania were fueled by alcoholism and rage and the results were not pretty — from war crimes to bribery to wiretapping to obstruction of justice.

Things have sometimes gotten worse since we rid ourselves of this viper. For example, Reagan’s administration was more corrupt than Nixon’s and Ronnie nearly destroyed the nation’s economy. Only twelve years later, George W. Bush stepped up the Conservative malevolence by nearly destroying the entire world’s economy.

George W., Dick Cheney, and Donald Rumsfeld have not yet been prosecuted for their war crimes, but back during the tortured years of 1969-1974, Nixon and his crew set new records for illegality and human suffering.

There have been oodles of books written about the Nixon The Crook, Nixon The Racist, Nixon The RWNJ, and Nixon The War Criminal, but what makes this one stand out is the author’s access to recently-declassified documents that had been hidden away for four decades.

Like its subject, the book has a tendency to avoid nuance. In every chapter, Weiner cuts to the heart of the matter using prose that quickly rolls over you while the facts keep your eyebrows raised until they hurt. The subject matter may make you want to soak your hands in sanitizer but the fast pace of Weiner’s writing is refreshing.

Just a glance at the Table of Contents gives you an idea of what’s coming. Here are some of the chapter titles:

“We have produced a horrible tragedy.”

Scum. That’s only one of the ways to describe the scoundrels, malefactors, and reprobates who gravitated toward Nixon:

A generation of the American right arose with Nixon; through them, his influence resounds down the decades. A future president, George H.W. Bush, was his steadfast Republican National Committee chairman. Seven future secretaries of defense served Nixon, including Dick Cheney and Donald Rumsfeld, who labored mightily to destroy the foundations of Lyndon Johnson’s Great Society, at Nixon’s command. Six future secretaries of state came up through the Nixon White House; so did six directors and deputy directors of central intelligence.

Such lowlifes as Antonin Scalia and William Rehnquist were also the beneficiaries of Nixon’s fawning praise.

Conservatives are often war mongers. After all, they get much of their campaign financing from wealthy corporations, especially firms involved in the military-industrial complex. But Nixon dealt in death and destruction to an unprecedented degree.

Glance at the book’s Index under “North Vietnam, bombing of” and “Cambodia, bombing of,” and you find references to the carnage on 59 pages. Consider this paragraph about Nixon and two of his cronies, advisor for National Security Affairs Henry Kissinger (who was later elevated to Secretary of State), Kissinger’s right-hand man General Alexander Haig, and General Creighton Abrams:

The full scope of the destruction the United States unleashed on Cambodia remained unrevealed for three decades, due to the deliberate falsification of the bombing records, authorized by Nixon and executed by Kissinger, Haig, and General Abrams. The falsification violated the military laws of the United States. The bombing of a neutral nation arguably violated the laws of war.

To give an idea of the extent of the violations:

Between March 1969 and August 1973, America dropped 2,756,727 tons of bombs on Cambodia. That figure was nearly five times greater than previously known, exceeding the tonnage of all Allied bombing during World War II, including Hiroshima and Nagasaki.

(If my math is correct, that above-mentioned figure works out to five-and-a-half billion pounds of bombs.)

While the Watergate break-in is the most-remembered crime of his administration, that pales in comparison with his deliberate destruction of the Vietnam War peace talks for his own political gain. The result was lengthening the war in Vietnam for several years with a terrifying cost in human lives. Conservatives are all heading to their own section of hell but within that space Nixon has his own special roasting pit.

Criminals and their Crimes

Tricky Dick’s war crimes, illegal wiretaps, bribery, and obstruction of justice at long last resulted in Nixon being forced to resign the presidency. One wonders about his sentencing if all of his crimes had not been pardoned by Gerald “Played Too Much Football Without A Helmet” Ford.

* Deputy assistant to the president Dwight Chapin: lying to the jury.

While their sentences were often reasonably lengthy, all but Liddy and Hunt had their punishments greatly reduced: the time served in prison for the whole gang together added up to only twenty years.

Even some of the people around Nixon recognized the essential worthless nature of the man. And remember, these people are themselves basically misanthropic and anti-American because they are Conservatives.

His Cabinet and his White House staff soon realized that Nixon cared little about domestic affairs, least of all housing, health, education, welfare, and civil rights. Unless an issue could be leveraged for political advantage leading to Nixon’s reelection, it was a waste of time. “He believed in nothing,” said James Farmer, assistant secretary at the Department of Health, Education, and Welfare and one among very few black Nixon appointees. “He was neither moral nor immoral, but was amoral; he made decisions based on how they would affect him politically, not based on whether they were right or wrong.”

In the second half of the book, more and more filth about Conservative leader Nixon is brought to light:

* “Nixon had undertaken many of the major military offensives of the Vietnam War without consulting Congress; he had created a three-billion-dollar slush fund, stashed throughout the federal government, for classified military and intelligence operations; he had established scores of secret statutes without consulting the courts…”

* “The president had lied. He had withheld evidence. He had counseled his aides to present false testimony.”

* “Nixon, Haldeman, and Ehrlichman discussed how to smuggle more than $300,000 in cash out of the White House and into the hands of the convicted burglars.”

The long-term legacy of Richard Nixon is dismal. Members of the moron base of the Republican Party have not learned anything from viewing his dishonesty and sedition — they still always vote for one of their own kind.

Basically, here’s what happens: The demagogues, racists, authoritarians, greedwhores, and religiosity freaks in the GOP say “vote for Bigot J. Conservatard” and forty percent of the electorate does just that.

To be fair, when thinkers, statesmen, and progressives say “settle for Generic R. Moderate,” well, then forty percent of the electorate does just that.

This leaves most elections in the hands of voters in the “middle” — people who are obviously unable to recognize the treachery of Conservatives. The so-called independents swing one way, then another, sometimes giving us the malignancy of a Nixon, Reagan, or Bush — which means that a moderate Democrat eventually has to come into office to clean up the mess left by the Republicans.

Reading about the terrors of Conservatism, whether in an economics book or a fast-paced expose like “One Man Against the World,” can be good for Americans. It’s a tragedy that so many voters refuse to recognize the danger of RWNJs.

The post Book Review: Nix On Nixon – ‘One Man Against the World’ appeared first on MuseWire.