It may sound like baby-talk but Dada was a controversial art movement that flared up during World War I and insisted on taking unconventionality to new heights. “Destruction Was My Beatrice: Dada and the Unmaking of the Twentieth Century” (ISBN: 9780465089963) by Jed Rasula presents a behind-the-scenes look at the lives of Dadaists as they attempted to forever alter art and literature.

No one is sure who came up with the name Dada. The word means different things in different languages — “hobbyhorse” or “nursemaid” in French, “yes, yes” in Russian, “tail of a sacred cow” in one African tribe, and so on — and that suited the avant-garde artists and writers who embraced the movement. 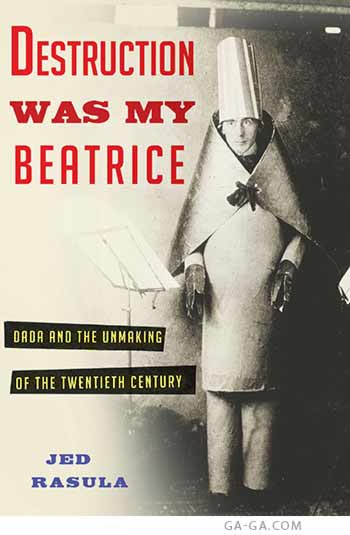 One of the group’s many provocateurs attempted to rope everyone into the game by writing, “To be against this manifesto is to be a Dadaist.” This prompted a competing manifesto in which the writer stated, “In principle I am against manifestos, as I am against principles.” Wherever Dada was celebrated, you can be certain that seriousness and frivolity were dance partners at the ball.

Emerging during The Great War (before we started to number our World Wars) and written off by the mid-1920s, the spirit of Dada has continued to infuse art, literature, music, comedy, and even politics. True to its unconventional nature, it is sometimes difficult to pin down:

Dada took on a peculiar glow, as though it were a radioactive element emitting a hallucinatory pulsation. That’s why there’s little sense in making Dada out to be a unified enterprise, with a single collective focus. Its identity multiplied with its occasions and its participants.

Author Jed Rasula, professor at the University of Georgia, appears to have genuine affection for the writers and artists who embraced the anger, absurdity, shock, and cacophonous humor of Dada — the people who would have nodded knowingly at the book’s title (it comes from Stephane Mallarme and refers to Dante’s muse; in other words, “destruction was my inspiration,” something that should appeal to every Goth, teen, or adult who is appalled by the machinations of today’s vast military-industrial complex).

It is important to remember that Dada conducted its assaults on the bourgeoisie via prose and poetry as much as art. As Rasula points out about Dada literature, “Its provocations used language to undermine the semantic authority of language. The sense it made was always precarious, if not outrageous, but in the process the normal hankering for linguistic stability came to seem equally absurd.”

Perhaps Tristan Tzara, a pivotal figure in Dada, put it best: “…Dada is a virgin microbe that penetrates with the insistence of air into all the spaces that reason has not been able to fill with words or conventions.”

Journalists of the time often treated the movement as if it was nothing more than mere stunts, and the Dadaists proceeded to help out in this regard:

For a politically shrewd April Fool’s prank in 1918, [they] notified the authorities of the Berlin suburb Nikolassee that they were dispatching forces to establish a Dada republic there. The alarmed community mobilized its militia in response, two thousand strong, warily awaiting the onslaught of Dada hordes.

The hordes were probably cavorting merrily in one of their favorite nightspots such as the Cabaret Voltaire.

It is difficult to agree with every choice Rasula makes. There is a great deal of focus on the people of Dada rather than the art and literature. Sometimes the book seems less like a saga of the movement and more like a friendly examination of the participants’ motives, liaisons, peccadillos, and feuds.

Of greater issue, especially to those of us who love Dada art, is how many times Rasula refers to an important piece of art that is not one of the illustrations. If you stay connected to the Internet while reading, you can find the images online. It isn’t structured like an interactive book, but you can make it so. The work does contain several excellent bibliographic resources. In particular, try this: http://www.lib.uiowa.edu/dada/

Without Dada we would have had no mash-ups, no samplings, so photomontages, no happenings — not even Surrealism, or Pop art, or punk… Without Dada, modern life as we know it would look very, very different — in fact, barely even modern.

And therefore, all praise be to Dada — the world is better for it. Or not.

The post Book Review: If You Know Nada about Dada – ‘Destruction Was My Beatrice’ appeared first on MuseWire.