Chuckles, chortles, grins, guffaws and belly laughs. You’ll find all that and more in “The Lost Continent: Travels in Small-Town America” (ISBN: 9780060920081), a wonderfully observant and politically incorrect book from Bill Bryson. 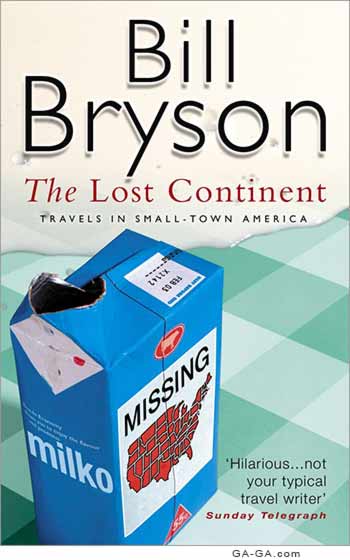 A guy gets into an old car and putters around America making wisecracks about the highways, the signs, the architecture, the weather, the food, the stupidity, the avarice and so forth. That may sound pretty straightforward but because the guy making the pithy remarks is Bill Bryson, the journey is pure pleasure.

Sometimes you’ll read passages out loud while pretending you’re the author and you’re in a lecture hall full of people who are laughing at your lovely sentences and applauding each section because so much of it is just about perfect. Okay, maybe this pretend-time is something that is only done by me. But that doesn’t change the fact that Bryson’s annotations are beautifully phrased and spot-on in their truthiness.

USA-born but permanently residing in the UK, Bryson views his native land with love and loathing and the results are spectacularly funny while deliciously snarky.

Driving Down Those Roads

Although I am currently a California resident, I was born in the Midwest and each summer my parents would drive us back to Wisconsin by way of every possible state between Los Angeles and Milwaukee. So I’ve been on some of the highways and never-again-will-I-return-byways that Bryson is describing with appreciation. Well, perhaps not always appreciation. Sometimes he tosses in a hint of disdain, derision, and wildly humorous detestation. But he means all of it in the best possible way.

Somewhere during the seventy miles between Great Bend and Dodge City you leave the Midwest and enter the West. The people in the towns along the way stop wearing baseball caps and shuffling along with that amiable dopeyness characteristic of the Midwest and instead start wearing cowboy hats and cowboy boots, walking with a lope and looking vaguely suspicious and squinty, as if they think they might have to shoot you in a minute.

Yup, I’ve experienced all of that.

Majesty Amidst the Mirth

The book is not without admiration for parts of America. Being an exquisite writer, Bryson often paints magnificent pictures in your brain:

The road led steeply up through broad-leaved forests of dappled sunshine, full of paths and streams, and then, higher up, opened out to airy vistas. All along the road through the park there were lookout points where you could pull the car over and go “ooh!” and “wow!” at the views. They were all named for mountain passes that sound like condominium developments for yuppies — Pigeon Gap, Cherry Cove, Wolf Mountain, Bear Trap Gap. The air was clear and thin and the views were vast. The mountains rolled away to a distant horizon, gently shading from rich green to charcoal blue to hazy smoke. It was a sea of trees — like looking out over a landscape from Colombia or Brazil, so virginal was it all. In all the rolling vastness there was not a single sign of humanity, no towns, no water towers, no plume of smoke from a solitary farmstead. It was just endless silence beneath a bright sky, empty and clear apart from one distant bluish puff of cumulus, which cast a drifting shadow over a far-off hill.

I find it salutary to pull up a chair beside passages like that and go “ooh!” and “wow!”

Attack of the RV People

Anyone who has been on the road while traveling between real cities has encountered RV people. Owners of the various-sized monstrosities called Recreational Vehicles are an eccentric subculture, as Bryson has noticed:

These things, these RVs, are like life-support systems on wheels. Astronauts go to the moon with less backup. RV people are another breed — and a largely demented one at that…. You can see these people at campgrounds all over the country, standing around their vehicles comparing gadgets — methane-powered ice-cube makers, portable tennis courts, anti-insect flame throwers, inflatable lawns. They are strange and dangerous people and on no account should be approached.

While not as lofty as Alexis de Tocqueville’s “Democracy in America,” Bryson’s book has the advantages of modern phrasing and a lot more sarcasm. “The Lost Continent” is a book full of rural oddities, urban blight, and a population seemingly bent on fleecing the gullible. Before, y’know, they fleece us first.

Meanwhile, Bryson notes that the mini-monuments we construct in our cities and towns and rural sanctuaries are frequently appalling:

America has never quite grasped that you can live in a place without making it ugly, that beauty doesn’t have to be confined behind fences, as if a national park were a sort of zoo for nature. The ugliness intensified to fever pitch as I rolled into Gatlinburg, a community that had evidently dedicated itself to the endless quest of trying to redefine the lower limits of bad taste.

Bryson unabashedly pays the entrance fee to every gimcrack tourist trap, fake museum, and snake pit he encounters. And yes, he takes the complete tours while making notes. He does this enthusiastically, providing lots of detail and hilarious commentary. He does this so we don’t have to. You’re welcome.

In “The Lost Continent,” Bill Bryson is laughing at my relatives, my heritage, my country, and my people. But I don’t mind because he makes me laugh along with him.

Promo trailer for “The Lost Continent” —