With two million copies sold, Howard Zinn’s “A People’s History of the United States” (ISBN: 9780060838652) is possibly the most successful history book in, well, history. It is also riveting, sobering, and valuable. While decent Americans admire it, RWNJs loathe it. 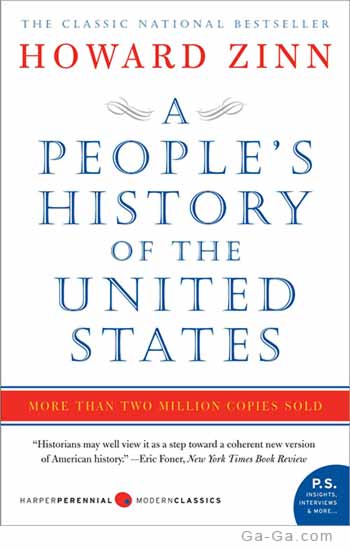 From practicing genocide against the continent’s indigenous people to the kidnapping and enslavement of thousands of another continent’s race, the United States of America was born of bloodshed, cultivated with cruelty, and grown through greed. We may well be, as Abraham Lincoln said in 1861, “the last best hope of earth,”* but the trail of tears we have deposited in our wake would drown many a less fortunate nation.

*The phrase has been appropriated by many others, including the great prevaricator, Ronald Reagan.

As with any writer who dares to deal in facts, Howard Zinn is often denigrated by rightwing nutjobs, the kind of moron who screams nonsense like “My country right or wrong!” or “Love it or leave it!” The measure of their cowardice lies in their refusal to disassociate themselves from the barbarism dating from the landing of Columbus. To grow and heal, we need to acknowledge and mourn the egregious errors of our troglodyte ways.

Time and again, Zinn handles the tsunamis of history with lightning bolts of sentences containing observations that apply down through the ages. For example, after pages containing frightening details of our nation’s first war from 1775 to 1783, comes this pithy passage: “Ruling elites seem to have learned through the generations — consciously or not — that war makes them more secure against internal trouble.” And then there is this:

It seems that the rebellion against British rule allowed a certain group of the colonial elite to replace those loyal to England, give some benefits to small landholders, and leave poor white working people and tenant farmers in very much their old situation…. Now, with the British out of the way, the Americans could begin the inexorable process of pushing the Indians off their lands, killing them if they resisted. In short, as Francis Jennings puts it, the white Americans were fighting against British imperial control in the East, and for their own imperialism in the West.

In U.S. legislative actions, compromise was frequently the watchword, and unfortunately this often gave the word a bad name. As happened in the Constitution, which compromised the hell out of people of color, women, and the poor. In essence, Zinn points out, the Constitution allowed “the elite to keep control with a minimum of coercion, a maximum of law — all made palatable by the fanfare of patriotism and unity.”

Zinn sometimes comments on the way we pervert and distort our history, one example being our remembrances of Andrew Jackson:

If you look through high school textbooks and elementary school textbooks in American history you will find Jackson the frontiersman, soldier, democrat, man of the people — not Jackson the slaveholder, land speculator, executioner of dissident soldiers, exterminator of Indians.

The same myopia often pertains to our historical reverie about being a great and good people, or our turning a blind eye toward the Anti-Renter movement, Dorr’s Rebellion, or anything about class struggles. “In premodern times, the maldistribution of wealth was accomplished by simple force. In modern times, exploitation is disguised — it is accomplished by law, which has the look of neutrality and fairness.”

Further, our history books steadfastly avoid much discussion of racism, plutocracy, theocracy, and the suppression of voting rights — things which are openly being carried on today by the Republican Party.

There are many tales of terror in the book, from incidents like spreading smallpox among Indian tribes to countless examples of bloodletting. All of it is shocking despite the reserved and stately language of Zinn.

There are also some examples of myth-busting, as with the fable of the American rags-to-riches story. Sure, it happened on occasion, but the one-in-a-million chance was only a teensy bit beyond the category of legend. Fortunes were amassed by certain chosen families by hook or by crook.

Most of the fortune building was done legally, with the collaboration of the government and the courts. Sometimes the collaboration had to be paid for. Thomas Edison promised New Jersey politicians $1,000 each in return for favorable legislation. Daniel Drew and Jay Gould spent $1 million to bribe the New York legislature to legalize their issue of $8 million in “watered stock” (stock not representing real value) on the Erie Railroad.

There are a great many sad facts surrounding John D. Rockefeller, Andrew Carnegie, the Astors, the Vanderbilts, and on and on. One example bears repeating here. It concerns J. P. Morgan:

During the Civil War he bought five thousand rifles for $3.50 each from an army arsenal, and sold them to a general in the field for $22 each. The rifles were defective and would shoot off the thumbs of the soldiers using them. A congressional committee noted this in the small print of an obscure report, but a federal judge upheld the deal as the fulfillment of a valid legal contract.

The excellent 20-page Bibliography points you to further reading.

We tend to think that the stupidity of Mitt Romney’s “corporations are people, my friend” is recent. But Zinn shows that by 1886,

the Supreme Court had accepted the argument that corporations were “persons” and their money was property protected by the due process clause of the Fourteenth Amendment. Supposedly, the Amendment had been passed to protect Negro rights, but of the Fourteenth Amendment cases brought before the Supreme Court between 1890 and 1910, nineteen dealt with the Negro, 288 dealt with corporations.

So you can see that much of America’s history has been perverted by rightwing nutjobs who were just as evil as the current crop of 245 currently in the House and the 54 currently in the Senate (including the #47Traitors). Shocking as it may seem, the nation has never been free from douchebag Republicans. Not to mention the sub-human creatures Alito, Scalia, and Thomas on the current Supreme Court.

While the nation has always been fueled by greed, the latter half of the twentieth century and the beginning of the twenty-first also ushered in a national fascination with lunatics at the helm of state, with neo-Fascist crazies Nixon, Ford, Reagan, Bush the Oblivious, and Bush the Puppet (Dick Cheney was actual President) attempting to ruin the country’s economy and ensuring racism for 28 sore and sorry years. Example:

While he built up the military (allocations of over a trillion dollars in his first four years in office), Reagan tried to pay for this with cuts in benefits for the poor. There would be $140 billion of cuts in social programs through 1984 and an increase of $181 billion for “defense” in the same period. He also proposed tax cuts of $190 billion (most of this going to the wealthy).

Reading our nation’s sordid history can be dispiriting.

When the New Deal was over, capitalism remained intact. The rich still controlled the nation’s wealth, as well as its laws, courts, police, newspapers, churches, colleges. Enough help had been given to enough people to make Roosevelt a hero to millions, but the same system that had brought depression and crisis — the system of waste, of inequality, of concern for profit over human need — remained.

It is sad to realize that the Klan is the only group of Republican thugs we have successfully marginalized. We still have time to pull together to correct the wrongs of the right. But there is much work to be done.

The post Book Review: Birthed in Blood and Betrayal – A People’s History of the United States appeared first on MuseWire.