If humanity keeps on its present course, the result may well be “The Sixth Extinction: An Unnatural History” (ISBN: 9781250062185). Elizabeth Kolbert’s writing is delightful even as her book documents a doomsday scenario.

Slowly unfolding disaster has a certain fascination. As in: “see the pretty train wreck” or “let’s watch the car crash” or “look how the BP oil spill is still hurting people.” But interest in this sort of thing is usually capricious. Would a reader remain fascinated over the length of a whole book? 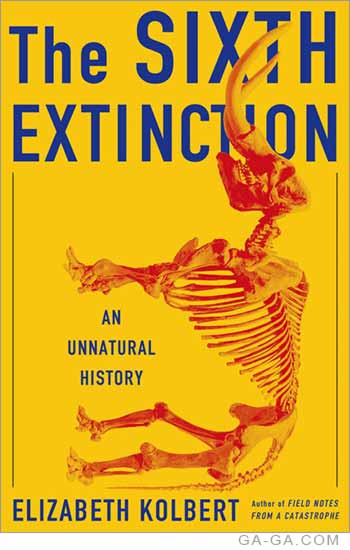 The answer is yes. Or the answer is yes with a terrific writer like Elizabeth Kolbert. The New Yorker columnist compels you to keep right on reading no matter what calamity of nature or humanity is being discussed. She could probably do forty thousand words on the Dewey Decimal System and make it entertaining. In her mesmerizing “The Sixth Extinction,” you gulp and wince but keep turning the pages. As you read, you are filled with anger and awe and perhaps you’ll be moved to do something about the stupidity of our species.

Kolbert is a reserved writer, letting her lovely prose deliver the facts like well-timed combination punches from a superbly trained boxer. Cataclysmic events and the terror that is awaiting humanity are the order of the day in “The Sixth Extinction” but the writing feels positive despite all the damning evidence.

There have been five mass extinctions in the history of our planet. The trick for us right now is recognizing the potential sixth one and figuring out what to do to avoid it. Part of the problem is being able to get the big picture in our minds and holding onto it.

Any event that has occurred just five times since the first animal with a backbone appeared, some five hundred million years ago, must qualify as exceedingly rare. The notion that a sixth such event would be taking place right now, more or less in front of our eyes, struck me as, to use the technical term, mind-boggling.

As Kolbert notes, “those of us alive today not only are witnessing one of the rarest events in life’s history, we are also causing it.” For some misguided folks, this is a difficult admission to make, which only causes the problems to continue.

Fun Amidst the Ruins

There is mystery and suspense in the book, and more than a bit of travelogue:

The Gola del Bottaccione is now a tourist destination … It is here that in the late nineteen-seventies, a geologist named Walter Alvarez, who had come to study the origins of the Apennines, ended up, more or less by accident, rewriting the history of life. In the gorge, he discovered the first traces of the giant asteroid that ended the Cretaceous period and caused what may have been the worst day ever on planet earth. By the time the dust — in this case, literal as well as figurative — had settled, some three-quarters of all species had been wiped out.

The rest of the chapter becomes something akin to a police procedural as clues are gathered and the truth discovered. (One might call it “Cold Case: Ecology Unit.”)

Some fun is had with a possible name for the age in which we now live. While “Cenozoic” is the technical term for the 65 million years during which mammals have roamed the planet, there are some sardonic suggestions to replace it. One idea comes from the Canadian marine biologist Daniel Pauly who proposes “Myxocene,” from the Greek term for slime. Another comes from biologist Michael Soule and his notion is wonderful: “Catastrophozoic.”

Humanity has transformed the planet. In and of itself that may not be a bad thing, but the problem is that we’re doing it so poorly. We have “altered the composition of the atmosphere.” You know, the atmosphere we breathe.

The night was balmy and, beyond the beams of our flashlights, pitch-black. Even in the dark, the extraordinary vitality of the reef was evident. We passed several loggerhead turtles waiting out the low tide with what looked like bored expressions. We encountered bright blue starfish, and leopard sharks stranded in shallow pools, and ruddy octopuses doing their best to blend into the reef. Every few feet, we had to step over a giant clam, which appeared to be leering with garishly painted lips. (The mantles of giant clams are packed with colorful symbiotic algae.) The sandy strips between the blocks of coral were littered with sea cucumbers, which, despite the name, are animals whose closest relations are sea urchins. On the Great Barrier Reef, the sea cucumbers are the size not of cucumbers but of bolster cushions. Out of curiosity, I decided to pick one up. It was about two feet long and inky black. It felt like slime-covered velvet.

Reading about our “progress” reveals that we’re attempting to kill all of the above while doing in our own species as well. We are disrupting the earth’s biological and geochemical systems, transmuting the air, and acidifying the oceans and — surprise, surprise — here is the result: “we’re putting our own survival in danger.”

“The Sixth Extinction” will not be accepted by RWNJs because the book deals in facts, specifically involving history and science. Indeed, Kolbert’s insistence on relying upon research will be anathema to conservative troglodytes, greedwhores, idiots, and morons (sorry for the tautology).

But for those people with a moral core and the ability to comprehend what they read, this book will be of high value. The writing is quite wonderful — it is a joy to see how Kolbert conveys “the excitement of what’s being learned as well as the horror of it.” Here’s hoping we learn to heed the warning signs that are all around us.

Elizabeth Kolbert in a Google talk featured on YouTube —

The post Will Humans be the Next Extinction? Welcome to Doomsday in Kolbert’s ‘The Sixth Extinction’ appeared first on MuseWire.