How often do you look forward to reading about science and history? Bill Bryson makes learning enjoyable in ‘A Short History of Nearly Everything’ (ISBN: 978-0-307-88515-9) now available in an illustrated edition. Why can’t textbooks be this delightful and fascinating?

There is something you should know before picking up a copy of Bill Bryson’s superb “A Short History of Nearly Everything.” Despite being packed with facts and figures, it is certainly among the most charming works of education you’re ever likely to meet. I hesitate to use the dreaded “e-word” in that sentence, but damn he sure makes learning fun. 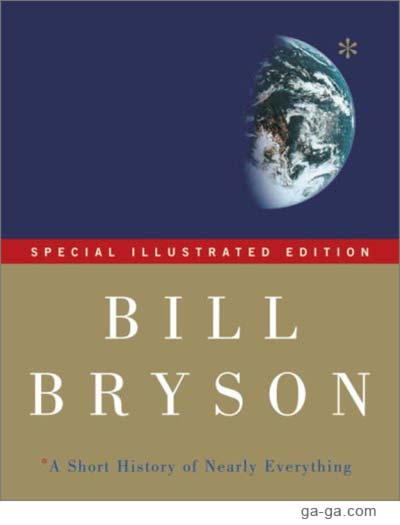 Part of this occurs because of his passion for the many varied topics he tackles in the book. Another is his dry and deft sense of humor. A larger reason is the clarity and flow of his writing style. Take his musings on the Big Bang theory:

It may be that our universe is merely part of many larger universes, some in different dimensions, and that Big Bangs are going on all the time all over the place. Or it may be that space and time had some other forms altogether before the Big Bang — forms too alien for us to imagine — and that the Big Bang represents some sort of transition phase, where the universe went from a form we can’t understand to one we almost can. “These are very close to religious questions,” Dr. Andrei Linde, a cosmologist at Stanford, told the New York Times in 2001.

From start to finish, the reader is gently transported from one concept to another with relish, wit, and a grin.

The second half of the eighteenth century was a time when people of a scientific bent grew intensely interested in the physical properties of fundamental things — gases and electricity in particular — and began seeing what they could do with them, often with more enthusiasm than sense. In America, Benjamin Franklin famously risked his life by flying a kite in an electrical storm. In France, a chemist named Pilatre de Rozier tested the flammability of hydrogen by gulping a mouthful and blowing across an open flame, proving at a stroke that hydrogen is indeed explosively combustible and that eyebrows are not necessarily a permanent feature of one’s face.

The Powers That Be

Authoritarian rule often rears its ugly head in the story, whether it concerns powerful institutions or dominant individuals. When the first attempt to scientifically measure the age of the earth was made by Georges-Louis Leclerc, Comte de Buffon, his conclusion was considered “a radical notion” and “Buffon found himself threatened with excommunication for expressing it. A practical man, he apologized at once for his thoughtless heresy, then cheerfully repeated the assertions throughout his subsequent writings.” Gotta love that attitude!

Later, in more modern times, as scientists constructed ever more powerful particle detectors, cyclotrons, atom smashers, particle accelerators, and the like, they began to acquire “names that sound like something Flash Gordon would use in battle: the Super Proton Synchrotron, the Large Electron-Positron Collider, the Large Hadron Collider, the Relativistic Heavy Ion Collider.” At every step, despite the use of those nifty names, the naysayers and doomsday predictors made lots of noise.

Fears have been raised that in their enthusiasm scientists might inadvertently create a black hole or even something called “strange quarks,” which could, theoretically, interact with other sub-atomic particles and propagate uncontrollably. If you are reading this, that hasn’t happened.

The preponderance of the book deals with how we came to know the verified facts of our existence despite human error and bureaucratic (and religious and right-wing nutjob) interference. But you’ll find rich and sometimes poignant speculation discussed in the book as well.

For example, there is a two-and-a-half page discussion of what would happen if the earth was struck by an asteroid (chunk of rock orbiting within our solar system) or comet (chunk of ice or rock from outside our solar system). The way Bryson handles this frightening possibility utilizes nicely visual language while imparting information that goes down as if coated in honey, even if the situation deals with destruction, death and doom:

An asteroid or comet traveling at cosmic velocities would enter the Earth’s atmosphere at such a speed that the air beneath it couldn’t get out of the way and would be compressed, as in a bicycle pump…. In this instant of its arrival in our atmosphere, everything in the meteor’s path — people, houses, factories, cars — would crinkle and vanish like cellophane in a flame.

Or take Bryson’s poetic pondering about the grand cosmic happenstance of our being Right Here Right Now as we struggle along in our little corner of the continuum of time:

The universe is an amazingly fickle and eventful place, and our existence within it is a wonder. If a long and unimaginably complex sequence of events stretching back 4.6 billion years or so hadn’t played out in a particular manner at particular times — if, to take just one obvious instance, the dinosaurs hadn’t been wiped out by a meteor when they were — you might well be six inches long, with whiskers and a tail, and reading this in a burrow.

It is astonishing how often Bryson relates eye-popping stories of the advancement of knowledge in which an unforeseen breakthrough suddenly reveals a dramatic answer that then immediately shows there is so much more that we do not know. To make matters more interesting, our awareness of our own planet is still sometimes woefully inadequate. “We have better maps of Mars than we do of our own seabeds,” to cite one instance.

At another point in the wide-ranging book you will find an ode to cells that is quite lovely:

Your cells are a country of ten thousand trillion citizens, each devoted in some intensively specific way to your overall well-being. There isn’t a thing they don’t do for you. They let you feel pleasure and form thoughts. They enable you to stand and stretch and caper. When you eat, they extract the nutrients, distribute the energy, and carry off the wastes — all those things you learned about in junior high school biology — but they also remember to make you hungry in the first place and reward you with a feeling of well-being afterward so that you won’t forget to eat again. They keep your hair growing, your ears waxed, your brain quietly purring. They manage every corner of your being. They will jump to your defense the instant you are threatened. They will unhesitatingly die for you — billions of them do so daily. And not once in all your years have you thanked even one of them.

That paragraph, perhaps more than any other, illustrates the joy of reading “A Short History of Nearly Everything.” It is writing like Bill Bryson’s that makes one glad to be alive.

I heartily recommend you plunge into this wonderful book. Assuming you are not a home-schooled moron — in other words, assuming you are open to learning about facts, actualities, and knowledge-based activities — you will love Bill Bryson’s witty descriptions of wild characters, indefatigable explorers, and all manner of beasties and organisms that walk, lope, gallop, trundle, slither, ooze, spin, crawl, cling, swim, and explode across every square inch of our tiny part of the universe.

The post Book Review: ‘A Short History of Nearly Everything’ is delightful and fascinating appeared first on MuseWire.