Naomi Klein writes passionately and persuasively in her new book, “This Changes Everything” (ISBN: 9781451697384). It will anger you, scare you, throw you for a loop, and ultimately uplift you. 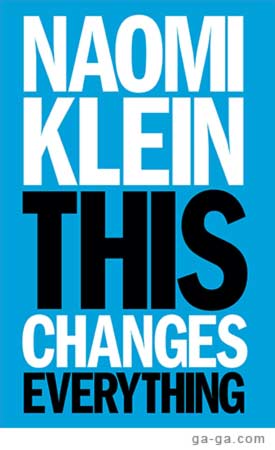 Not everyone is pleased with “This Changes Everything.” For example, there is quite a bit of saber-rattling from those among the billionaire class and the lackeys of corporate America; this is to be expected because Klein is calling for a modest reassessment of the means and ends of the capitalistic system. Wait, did I say reassessment? Sorry, I meant total upheaval and realignment.

For it is Klein’s view that:

…climate change could become a catalyzing force for positive change — how it could be the best argument progressives have ever had to demand the rebuilding and reviving of local economies; to reclaim our democracies from corrosive corporate influence; to block harmful new free trade deals and rewrite old ones; to invest in starving public infrastructure like mass transit and affordable housing; to take back ownership of essential services like energy and water; to remake our sick agricultural system into something much healthier; to open borders to migrants whose displacement is linked to climate impacts; to finally respect Indigenous land rights — all of which would help to end grotesque levels of inequality within our nations and between them.

How’s that for finding a positive in the vast morass of negative news?! It is a shock doctrine of its own. But it is completely necessary. After all, as she points out: “Faced with a crisis that threatens our survival as a species, our entire culture is continuing to do the very thing that caused the crisis, only with an extra dose of elbow grease behind it.”

To accomplish those abovementioned constructive changes in the world, many things would have to occur, and some of them would not be deemed desirable by plutocrats, oligarchs, corporatists, or their bought-and-paid-for shills in the GOP. For it seems as if the world will have to be turned upside down to accomplish the changes necessary to save the human race.

Yes, tossing aside the influence of the death merchants of the fossil fuel industry would be difficult for Democrats and impossible for Republicans. But this industry flip is just one of the topsy-turvy alterations necessary if the world is going to act in a sane manner over the next few decades.

Just as an educational aside, the effects of hydraulic fracturing in your water include methane and heavy metals such as arsenic, cadmium, chromium, cobalt, copper, lead, mercury, nickel, selenium, silver, thallium, and zinc. Oh, and also various drilling chemicals including hydrochloric acid, tetramethyl ammonium chloride, ethylene glycol, petroleum distillate, boric acid, and so on.

No wonder one of the citizens recently joining a lawsuit against fracking was Rex Tillerson, CEO of ExxonMobil. Yes, that avaricious swine was upset about hydraulic fracturing scheduled to be in the vicinity of his ranch.

Or take the case of Mossville, Louisiana, “a textbook case of environmental racism.” The community, originally built by freed slaves, used to offer residents a comfortable existence but “Today, fourteen chemical plants and refineries surround the town.”

Accidental leaks are commonplace and explosions are frequent. But even when factories are running smoothly, they spew approximately four million pounds of toxic chemicals into the surrounding soil, air, and groundwater each year. Before arriving in Mossville, I had heard about cancer and respiratory illnesses, and I knew that some residents have dioxin levels three times the national average. What I was unprepared for were the stories of miscarriages, hysterectomies, and birth defects.

This is what corporation men like Rex Tillerson fear for their own backyards while remaining blandly unconcerned about anyone else’s backyard.

There is a nefarious right-wing menace in this country comprised of fake “research” organizations and bogus “think tanks” that are disseminating false information to muddy the waters on an entire range of issues affecting Americans and the world at large. How are they able to accomplish this? They are funded by conservative nutjobs and anti-Americans like the Koch brothers and others in the corporate state.

The climate change denial groups “are collectively pulling in more than $900 million per year for their work on a variety of right-wing causes, most of it in the form of ‘dark money’ — funds from conservative foundations that cannot be fully traced.” Klein starts from this negative to find a positive:

Conservatives have managed to stall and roll back climate action by making climate about economics… Progressives can easily do the same: by showing that the real solutions to the climate crisis are also our best hope of building a much more stable and equitable economic system, one that strengthens and transforms the public sphere, generates plentiful, dignified work, and radically reins in corporate greed.

The Right’s Dismantling of America

These, after all, are the fervent dismantlers of the state, whose ideology has eroded so many parts of the public sphere, including disaster preparedness. These are the voices that have been happy to pass on the federal budget crisis to the states and municipalities, which in turn are coping with it by not repairing bridges or replacing fire trucks. The “freedom” agenda that they are desperately trying to protect from scientific evidence is one of the reasons that societies will be distinctly less prepared for disasters when they come.

When we fail to push back against the right-wing douchebags we become complicit in the harming of the earth, the environment, the body politic, and the lives of people across the globe:

We extract and do not replenish and wonder why the fish have disappeared and the soil requires ever more “inputs” (like phosphate) to stay fertile. We occupy countries and arm their militias and then wonder why they hate us. We drive down wages, ship jobs overseas, destroy worker protections, hollow out local economies, then wonder why people can’t afford to shop as much as they used to. We offer those failed shoppers subprime mortgages instead of steady jobs and then wonder why no one foresaw that a system built on bad debts would collapse.

Some sections of the book are devoted to Blockadia, the grassroots movement to prevent the fossil fuels industry from conducting its blitzkrieg operations in or near your town. Physically blocking access is a part of the protest as are court actions to protect land, soil, water, and air.

But even if you’re not in a neighborhood that is currently directly affected, there are necessary changes that must be made. Klein looks at the big picture:

Politicians must be prohibited from receiving donations from the industries they regulate, or from accepting jobs in lieu of bribes; political donations need to be both fully disclosed and tightly capped; campaigns must be given the right to access the public airwaves; and, ideally, elections should be publicly funded as a basic cost of having a democracy.

If you are not in favor of that you are not upholding the ideals of the United States of America. (Yes, I am speaking to you, Republicans.)

We are stuck because the actions that would give us the best chance of averting catastrophe — and would benefit the vast majority — are extremely threatening to an elite minority that has a stranglehold over our economy, our political process, and most of our major media outlets… our economy is at war with many forms of life on earth, including human life.

And only “the people” can do anything about that. But will we? Will you? Will you continue to let the corporatists, the plutocrats, the oligarchs, and the Republican know-nothings get away with murder? Or will you get off your ass and do something to fight for humanity?

Because, underneath all of this is the real truth we have been avoiding: climate change isn’t an “issue” to add to the list of things to worry about, next to health care and taxes. It is a civilizational wake-up call. A powerful message — spoken in the language of fires, floods, droughts, and extinctions — telling us that we need an entirely new economic model and a new way of sharing this planet. Telling us that we need to evolve.

There is so much more in the book. Heartbreaking stories, shocking tales, and perfidy galore from enemies of the USA like Marc Morano, Chris Horner, Patrick Michaels, Koch Industries, ExxonMobil, Cato Institute, Heritage Foundation, and on and on. If these troglodytes and greedwhores disgust you, and if you want to help fight their kind of evil, this book might be a good place to start.

VIDEO:
The official trailer for Naomi Klein’s “This Changes Everything” on YouTube: