A strange saga filled to the brim with fear and loathing, Rick Perlstein’s “The Invisible Bridge” documents the point in US history where the rightwing began to team up with corporations, racists, and morons to begin systematically destroying this nation. Subtitled “The Fall of Nixon and the Rise of Reagan,” the book (ISBN: 978-1-4767-8241-6) is a well-written chill ride full of ominous shudders. 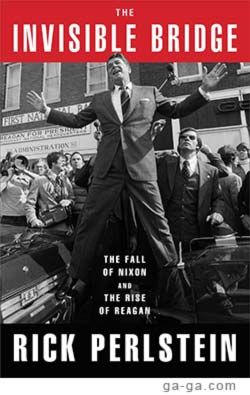 The horror, the horror! Watching that disgusting anti-American troglodyte Richard Nixon stew in his own filth makes for some delightful chapters in Rick Perlstein’s big and bold new book. Keep in mind that the ensuing spectacle — the formation of the current American Taliban party and the steady canonization of Ronald Reagan by rightwing nutjob knuckle-draggers — will make all decent people want to vomit. But it’s such a mesmerizing spectacle you’ll want to continue reading anyway.

Multiple story-lines thread through the book. The first 271 pages deal with the peeling back of Nixon’s veil of secrecy surrounding his law-breaking in Watergate, his dirty tricks, his using the IRS against his enemies, and so on. It is fascinating (although covered in greater detail in Perlstein’s “Nixonland: The Rise of a President and the Fracturing of America.”)

There is also a generous amount of time spent on the 1976 battle between Gerald Ford and Reagan for the right to lose to Jimmy Carter (who also does not come off well in these pages). Again, it is captivating, and in this case tells us something about the then-emerging conservative apocalypse that is currently strangling our nation to the detriment of American citizens and humanity at large.

A fact-free world is a rightwinger’s wet dream. To them, reality, data, information, science, and research are all things to be shunned or manipulated in order to sway ignorant voters. Denial is built into the Republican Party of the past half-century and Ronald Reagan was one of the best at the rejection of reality.

Reagan, it should be remembered, once stated that the Watergate burglars were “not criminals at heart” but instead were simply “well-meaning individuals committed to the reelection of the President.” The ability to spin painful truths into a sugarcoated fantasyland was one of Ron’s prime attributes.

It was the stories: the ones he told himself, the ones he told others, the ones born of heroic situations that he always was scanning the horizon to put himself at the center of, to prove to himself the world was always in actuality the way he preferred it to be. It was his greatest political skill. “Looking back my memory is very vivid”; “I shall always remember”; “fresh in my memory”; phrases like these saturate his recollections. They seem to do so in inverse proportion to the actual power of his recall. The gap between the one and the other was the measure of how he made himself, and others, feel good.

Conservative voters have always been steadfastly anti-American as well as unwaveringly anti-humanitarian, but in this telling it seems as if Reagan discovered the way to exploit their stupidity without relying exclusively on fear-mongering. While it’s true that conservatives have always felt good about snarling at decent people while ripping out the entrails of the country, Ronnie showed them how to do so with smiles on their faces.

So much of the history covered in the book is deeply embarrassing to virtuous people. Now that the USA is in the midst of so much GOP treachery it may be hard to recall, but there was once a generation of Americans who “had been proposing a new definition of patriotism, one built upon questioning authority and unsettling ossified norms. Then along came Ronald Reagan, encouraging citizens to think like children, waiting for a man on horseback to rescue them: a tragedy.”

With sedition running through his veins, Reagan spouted venom with a smile and did some amazingly reprehensible things, all of which the public consistently overlooked:

– On the difficulties in distributing public assistance, Reagan publically stated “Sometimes you wonder whether there shouldn’t be an outbreak of botulism.”

– Reagan “vetoed all but $1 million from a $5 million bill to help unemployed veterans get jobs.”

– Reagan was a friendly witness at the odious House Committee on Un-American Activities.

Also in the book are passages dealing with Ron’s movie star days of bedding starlets and the, um, “reputation” shall we call it, of his second wife Nancy. When she herself was a Hollywood starlet, “there were those delicate stories that began to circulate around town, in which she left the offices of powerful men at odd hours…” Gossipy stuff, granted, but fun to read in an eyebrow-raising sort of way.

Since Perlstein’s book ends with the election of Carter, what is not covered is the malevolence of the Reagan years when his dementia was beginning to bloom and 138 members of his administration were investigated, indicted, and/or convicted of crimes including lying to Congress, rigging of government grants, conspiracy to defraud the United States, accepting kickbacks, and illegal lobbying.

Not to mention Reagan nearly tripling the federal budget deficit and presiding over an increase in unemployment after cutting tax rates for the rich while raising them for the middle class and the poor. But I’m getting ahead of myself.

There is a 40-page chapter entitled “New Right?” that touches on most of the evils of the Party of Stupid, including: their racism (“Kill the niggers!” and “Niggers eat shit!” were some of their chants); their opposition to education (book banning and book burning — “They shouted that it was time to shovel books into bonfires” — which is still occurring today); their misogyny (fighting reproductive rights and idiotically calling abortion rights “legalized murder of masses of human lives”); and their loathing of basic humanity (with Heritage Foundation hoodlums bragging about cutting funding for mass transit, preventing access to food stamps, etc.)

In this chapter and many others, the loathsome enemies of civilization make frightening appearances. The list of disgusting anti-Americans includes Joseph Coors, Paul Weyrich, Richard Viguerie, Phyllis Schlafly, Jesse Helms, and the DeVos family, all dedicated to undermining the very ideals upon which the nation was founded. Their type of disloyalty has always been with us, of course, but Perlstein points out the steps that resulted in their gradually taking over the rightwing goon machine along with today’s demons Rupert Murdoch, Roger Ailes, Karl Rove, and so on.

The twin depravities of ALEC and CPAC (American Legislative Exchange Council; Conservative Political Action Conference) have a part in the book as well. Nothing good has ever resulted from these monstrosities, although not all of their spittle has been spewed out over the American people — one of the CPAC meetings in the mid-seventies “had been dominated by third-party talk among activists, with Ronald Reagan and George Wallace as their dream ticket.”

All major news dissemination companies are part of vast, multibillion dollar conservative corporations. There is no such thing as the “liberal media” but formulating a big lie about it serves the kook neocon mindset very well. Perlstein pinpoints one possible beginning of this perfidy: when TV Guide magazine — a publication that reached one-third of America at the time — began running articles by, among others, the RWNJ racist Pat Buchanan.

Buchanan was one of five rotating columnists penning a new feature called “News Watch.” The others were the former editor of the Republican National Committee’s magazine; Edith Efron, the author of a 1971 book alleging liberal media bias that the White House (in another Ervin Committee revelation) had bumped onto the bestseller list by secretly purchasing thousands of copies…

In 1972, when then-president Nixon shocked the nation — even Republicans — by revealing he had withheld evidence from the House Judiciary Committee and the American people, a GOP House member steadfastly backed Nixon.

Representative Earl Landgrebe, Republican of Indiana, showed up on the Today show the next morning and said, “I’m sticking with my president even if he and I have to be carried out of this building and shot.” The NBC interviewer, incredulous, asked him about the new facts in evidence. He answered, earnestly, “Don’t confuse me with the facts.”

That was and still remains the Republican mindset in a nutshell.

No source notes are printed in the book; instead, they are available online at: http://www.rickperlstein.net/the-invisible-bridge/

VIDEO:
Rick Perlstein talks about Ronald Reagan in a brief video on YouTube:

The post Book Review: Onset of the Zombie Apocalypse in ‘The Invisible Bridge’ appeared first on MuseWire.