Zephyr Teachout believes that venality has been on the minds and in the bloodstream of politicians since the founding of the nation. In “Corruption in America: From Benjamin Franklin’s Snuff Box to Citizens United” (ISBN: 9780674050402) she makes the case and provides some possible resolutions to the problem.

Let me introduce you to a nation with corruption so much on its mind that the country’s founders devoted 23 clauses of its constitution to addressing aspects of the problem. Yes, it’s the United States of America. 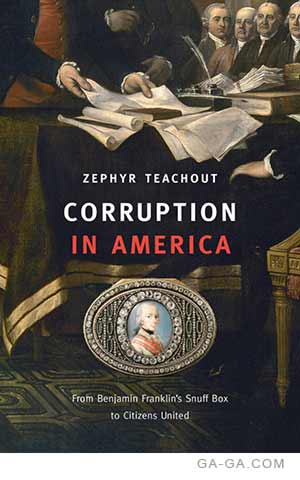 A word about the Tillman Act. It ostensibly prohibited corporations from contributing funds to federal campaigns. Sounds good, yes? Apparently it didn’t accomplish as much as everyone hoped when it was passed in 1907 because by the early 1920s, Congress got around to enacting some sort of enforcement of the law. (Spoiler alert: that didn’t accomplish very much, either.)

Today, in what we laughingly call more enlightened times, the Supreme Court has dismissed the very notion that boxcars full of cash might lead to corruption in politics. This kinda-sorta puts us right back where the USofA started, with many good people considering fleeing a country that is drowning in corruption in order to begin again in a new land.

Except there is precious little real estate left for the establishment of a corruption-free zone. This country is all we’ve got and we are really screwing things up. Zephyr Teachout has written “Corruption in America” to call more attention to political and corporate dishonesty, venality, vice, sleaze, bribery, and fraud. I wish the book was as exciting as it sounds. Her concepts are important but the book is not the incendiary call-to-action that’s needed.

More beautifully yclept than anyone in politics, Zephyr Rain Teachout also has a terrific combination of grit and grace. Currently a professor of constitutional and property law at Fordham University, she fights on the side of people rather than corporations.

And what a fighter she is: with near-zero name recognition among voters and not much financial backing, she challenged incumbent New York Governor Andrew Cuomo in that state’s Democratic primary. Despite being outspent by oh, about forty-to-one, she shocked a lot of people by getting thirty-four percent of the vote.

It was recently announced that Teachout has re-joined forces with the nascent Working Families Party (WFP) in New York. Unlike Republicans and Democrats, the WFP is attempting to live up to its goals of achieving a better future for all Americans. Teachout and the WFP want an economy that bolsters everyone, not just the wealthy.

“Corruption in America: From Benjamin Franklin’s Snuff Box to Citizens United” can be seen as one salvo in the war against the entrenched interests of Wall Street and big corporations. And isn’t it terrific to see the Citizens United decision cited as an example of corruption?!

Teachout goes further by pointing out that “Citizens United did not merely exclude alternate definitions of corruption. It actually took that which had been named corrupt for over two hundred years and renamed it legitimate and the essence of responsiveness.”

And, “Citizens United changed the culture at the same time that it changed the law. It reframed that which was unpatriotic and named it patriotic.” The same might be said for Conservatives as a whole.

The stakes are high: “What America now faces, if we do not change the fundamental structures of the relationship of money to legislative power, is neither mob rule nor democracy, but oligarchy.” That may suit the Koch brothers and the conservative cabal but it would mean the eventual downfall of the nation. According to Teachout, we have lost sight of the true meaning of corruption:

Using those words as a simple guide reveals that much of our current political system is rotten to the core — as our founding fathers would agree:

For John Adams, for example, patriotism and corruption were opposites; a patriot was one who puts the country’s interest “in his care,” whereas a corrupt courtier is one who puts his own interests in his care when in public service.

And that is why decent people can so easily point at the actions of a Mitch McConnell and a John Boehner and rightfully identify them as treasonous.

It is tempting to assume that our nation’s laws have become perverted solely because of the five rightwing nutjobs appointed to the Supreme Court by troglodyte presidents. (The abhorrent Reagan gave us the obscene Antonin Scalia and the confused Anthony M. Kennedy; the vacuous Bush I unleashed the distasteful Clarence Thomas; and the repulsive Bush II is responsible for the muddled John Roberts and the repugnant Samuel Alito.)

While the Roberts Court is an embarrassment to the concept of justice, there is plenty of blame to spread around. For example, Teachout has a chapter on how lobbying was initially equated with bribery but has now become common practice.

Still, the primary villains are plain to see, with Scalia as the evil leader and the other four bugbears trailing in the swill of his wake.

Teachout enumerates the ways we could make the nation a better and more true democracy, including “an absolute ban on staffers or members of Congress taking jobs in the influence industry” and “publically-funded elections and trust-busting,” which are, ironically, two proposals put forward by a Republican (true, it was Teddy Roosevelt, but still, he was a member of the often despicable GOP).

The book is not great. Chapters four and five, comprising 63 dry pages, read like a history class presentation, and a lawyerly one at that. Too much of the book feels like a master’s thesis paper, with long sections where Teachout quotes competing views from a wide variety of sources, just the way you do when trying to make your dissertation seem scholarly and well-researched.

While some corruption-related statutes have been determined to require quid pro quo and a handful of states in a handful of cases have required that a prosecutor prove a connection with an identifiable act to satisfy a bribery statute, over most of American history there is no deep association between corruption and either the phrase quid pro quo or the importance of a specific, identifiable act.

One can appreciate her points only by fighting off the soporific effect of her prose.

Fortunately, Teachout often gets to the heart of the many difficult decisions that must be made. Here is just one of the more straightforward examples: “When, if ever, is a campaign contribution corrupt? Is a $15 contribution designed to influence a state senator on fracking policy corrupt? What about a $15 million contribution?”

That we, as a nation, fail so often in considering such decisions is the reason we have to redouble our efforts to eradicate the GOP so that a true Progressive party can emerge to battle the too-conservative Democrats. Perhaps the Working Families Party will emerge as the start of a new American century. We can hope.

The post Book Review: Tons of ‘Corruption in America’ – venality has been in bloodstream of politicians since founding appeared first on MuseWire.