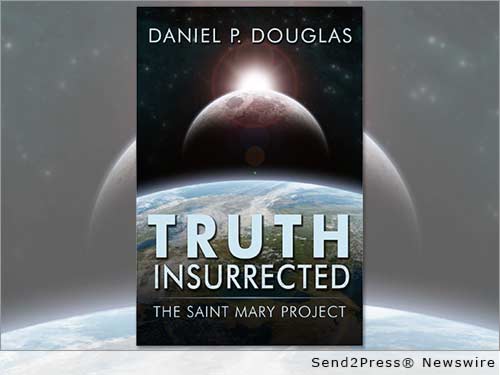 Geminid Press recently announced it has partnered with writer-director Jack Snyder to develop a screenplay for the acclaimed science fiction conspiracy thriller “Truth Insurrected: The Saint Mary Project” (ISBN: 978-0990737100) by Daniel P. Douglas. In the SF novel, readers plunge into a storyline featuring former FBI agent William Harrison who finds himself hot on the trail of a major “extraterrestrial cover-up.”

The Columbia Review of Books & Film highly recommended “Truth Insurrected” and described it as “An excellent science-fiction/conspiracy thriller.” Best Thrillers described the novel as “An engrossing, deftly-crafted UFO conspiracy thriller that is easily one of the most successful tales to emerge out of Roswell alien lore.”

“We are very pleased to partner with Jack Snyder, an award-winning filmmaker who has written, directed, and produced both features and short films,” Geminid Press co-founder, Paul Garver, said. “Jack’s a very talented professional, and given the popularity of the novel’s subject matter, as can be seen in such examples as the pending return of the ‘X-Files’ and a sequel for ‘Independence Day,’ we’re very excited about what the future may hold for a ‘Truth Insurrected’ screenplay.”

The estimated timeframe for completion of the “Truth Insurrected” screenplay is June, 2015. Geminid Press published the science fiction thriller in October, 2014, and it is currently available in Kindle eBook, paperback, and audiobook editions.

Daniel P. Douglas is a U.S. Army veteran who has also served as a senior analyst in the U.S. intelligence community. A long-term civil servant, with degrees in Political Science and Russian Area Studies, Douglas has also worked in the museum profession. His travels have taken him throughout the United States, Mexico, Europe, the Middle East, and the Caribbean.

As an author, Douglas creates epic tales – of the past, present, and future – with the most unlikely of heroes, and calls upon them to join extraordinary and mysterious struggles. His characters’ sometimes-reluctant choices and actions put them on a collision course with destiny and reveal unimaginable truths. In every pulse pounding, edge-of-your-seat adventure, survival means confronting personal flaws and doubts, thus forging unexpected fates as inspiring new champions in the eternal battle against evil. In short, Douglas is a multigenre author who turns ordinary people into extraordinary heroes.

Geminid Press, LLC, is an independent book publisher established in Albuquerque, New Mexico in August 2014. Inspiration for the company’s name originates with the Geminid meteor shower, which is visible in December, radiates from the Gemini Constellation, and intensifies every year. The owners of Geminid Press also happen to be identical twins born under the sign of Gemini. The company’s mission is to publish quality fiction and non-fiction books of up and coming writers. More information: http://geminidpress.com/ .

Jack Snyder is an internationally award-winning filmmaker who has written, directed, and produced both features and short films. In 2006, he co-wrote and directed the supernatural thriller, “Ghost Image,” starring Elisabeth Rohm (“Law and Order,” “Abduction,” “American Hustle”), and Stacey Dash (“Clueless”). The film sold to 20th Century Fox and NBC/Universal, has aired on the Showtime Network and The Movie Channel.

In 2011, Jack wrote, directed, and co-produced an action-thriller titled “Fatal Call.” He co-wrote an adaptation of a horror novel by the late writer of “Beetlejuice” and “The Nightmare Before Christmas.” That film, titled “Cold Moon,” which he co-produced, is currently in post-production. When Jack is not writing screenplays or making movies, he teaches several online media courses at the University of Missouri – St. Louis. Jack and his family currently reside in Los Angeles.