Author Nancy Sprowell Geise announces that on Sunday, September 14, 2020, Mayor Troxell presented Holocaust survivor with the honor in recognition of Joe’s 100th birthday. Joe said, “I am so honored and grateful that I’m still alive to celebrate 100 years. I can’t believe it. I love life and I love people.” 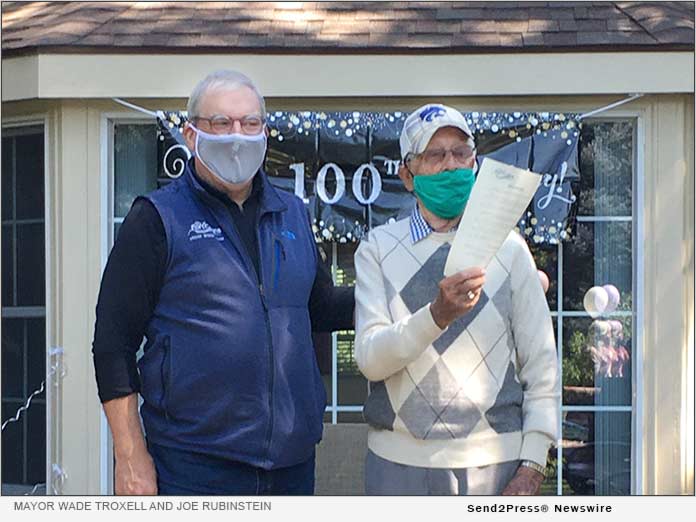 Author Nancy Sprowell Geise announces that on Sunday, September 14, 2020, Mayor Troxell presented Holocaust survivor with the honor in recognition of Joe’s 100th birthday. Joe said, “I am so honored and grateful that I’m still alive to celebrate 100 years. I can’t believe it. I love life and I love people.”

Shortly before dawn on a frigid morning in Radom, Poland, German soldiers forced twenty-one-year-old Icek “Joe” Rubinsztejn onto a crowded, open-air truck. The next day, several around him were dead. From there, things got worse for young Joe​-much worse.

Joe arrived at Auschwitz/Birkenau on April 30, 1942, and was imprisoned there for over two years before being taken to several other notorious camps, including Buchenwald, Ohrdruf, and Theresienstadt. Throughout his ordeal, surprising and remarkable events occurred to save his life.

Barefooted when he was seized, Joe would become one of New York’s leading shoe designers for legendary companies Herbert Levine, Inc., Nina Shoe, and others. Beth Levine called Joe, “The Man with the Golden Hands.” Joe designed some of the most expensive and sought-after shoes in the world. Shoes designed by Herbert Levine, Inc. were worn by first ladies and movie stars alike. While the Nazis took everything else, they were unable to take Joe’s love of life and his love of people.

Joe, who is Jewish, met Irene, who is Catholic, in Germany after the war. They married in 1947 and later this month will celebrate 73 of marriage. They lived in New York for over 30 years before moving to California, and then to Colorado in 2007.

When Joe was taken from his family, he had no idea he would never again see anyone he knew or loved. His widowed mother and four siblings, including Joe’s identical twin, were believed murdered at the Treblinka death camp along with over 33,000 others from the Radom Ghettos.

Despite having lost nearly everything a person can lose, Joe found a way to live a joy-filled life. He says, “No matter what, we have to love each other.”

For over 60 years, Joe never told anyone his story because he did not believe anything good could come from doing so.

Now, nearly every week Joe receives letters from people all over the world who have read about him in the book, “Auschwitz #34207 – The Joe Rubinstein Story” (ISBN: 978-1939919120) by author Nancy Sprowell Geise.

Learn more at the book at and author: http://www.nancygeise.com/

People tell Joe that if he found a way to live joyfully after all the loss and trauma he experienced, then they know they can face their challenges. Joe’s life is an inspiration for us all and an example of how to thrive, despite the most difficult of situations.