Uproar Entertainment is excited to announce the release of “I’m A Hooker” by Kristin Key. Armed with her quick wit and her trusty guitar, the Texas native slings her signature goofy songs and hilarious jokes on her fourth collaboration with Uproar Entertainment. 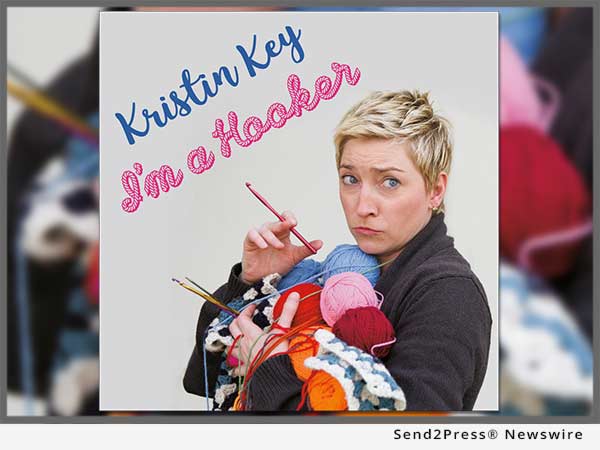 Uproar Entertainment is excited to announce the release of “I’m A Hooker” by Kristin Key. Armed with her quick wit and her trusty guitar, the Texas native slings her signature goofy songs and hilarious jokes on her fourth collaboration with Uproar Entertainment.

Kristin Key grew up a minister’s daughter in a small town in West Texas. Raised in a no-drinking, no-dancing, no instrumental music environment, she immediately took up drinking, dancing and playing an instrument. Proving that the almighty has a strange sense of humor, Kristin came out of the closet at 15. Needless to say, it did not go well. So, Kristin decided to “take it back” – into the closet, trying just a little harder to be straight.

At 19, while in college to become a paramedic, Key signed up for Open Mic Night at the local comedy club. As soon as she took the stage she felt at home. Over the next 5 years small shows in the Texas panhandle turned into 35 states worth of comedy. Audiences couldn’t help but love the original comedy songs, keen observations, wit and rapid-fire style of comedy coming from the “Preacher’s Kid.”

When Last Comic Standing held their auditions in Austin, Texas, she stood in line hoping for a chance to be seen. After 7 hours of waiting, she got her chance and her ticket to Hollywood to compete with the best in the comedy world. At the end of the season she stood among the final six and watched as her fan base exploded. With validation from millions of comedy fans, Key moved to L.A. and began preparing a new act to take on the road.

While participating in an anti-bullying fundraiser, Kristin finally broke her silence and decided to share her hilarious story of coming out, taking it back, living in the closet, and meeting her wife. After 15 years in comedy, Kristin has found a way to perfectly blend together her thought provoking hilarious true stories, original songs and outrageous off-the-cuff improv moments, ensuring that no two shows are the same.

Much has changed for Kristin Key from the dusty west Texas town of Amarillo to the bright lights of L.A. One thing that hasn’t changed is that fast-paced quick witted comedy that has kept audiences rolling in the aisles from the beginning. This is Kristin’s 4th comedy album for Uproar.