While it’s aimed at policy wonks instead of the normal reading public, “We Are Better Than This: How Government Should Spend Our Money” (ISBN: 9780199332243) by Edward D. Kleinbard contains much that could help the USA live up to our repeated claims of being the greatest nation in the world. 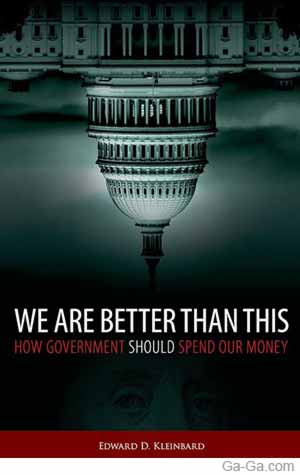 Sober and sane Americans have to love a book that asks if we’re a nation of jerks because of our current conservative fiscal policies. Kleinbard — a Professor at the USC Gould School of Law and a Fellow at The Century Foundation — has written a complex volume on the many faults in our current taxation system; his main focus is on the oodles of mistakes we make in the way we spend all those trillions of dollars.

“We Are Better Than This: How Government Should Spend Our Money” is pro-government. It’s a book that in the second paragraph of the Introduction points out that “government — which is to say, all of us, acting collectively — can make our country healthier, wealthier, and happier, if we put government to useful work in those areas where it most productively complements our private markets.”

Cool. But how? First, by acknowledging the lunacy of the fiscal views of the typical conservative troglodyte and the horrific results of their dystopian world-view:

We leave a cancer victim to feed a family of four on less than $12 per day in food stamp assistance, and a working man to supplement his family’s calories by hunting squirrels. Hard-working Americans now are reduced to selling their own hair, breast milk, or eggs to make ends meet. And in return, a member of Congress calls this government program an act of theft from him and other affluent American taxpayers. Yet at the same time, the Congressman apparently believes that the millions of dollars in federal agricultural subsidies that he has pocketed are the just deserts of the virtuous, paid to him by the gods, rather than by his fellow Americans through their tax burdens.

Kleinbard appears to be free from ideological bias. He was quoted by Michael Hiltzik in the L.A. Times as saying, “The left sees me as a Wall Street Journal Satanist, and the right as a stealth Marxian bent on destroying free enterprise.” In other words, he is pointing out fiscal failures without assigning too much blame to the overly-cautious centrists and the rightwing nutjobs intent on propelling us further down the road to ruin.

Chapters begin with quotations from Adam Smith’s “The Wealth of Nations,” and some care is taken to correct the way many conservatives distort the meaning of that 1776 book.

It is a long and painful journey from Adam Smith’s moral zeal, distaste for “natural selfishness and rapacity,” emphasis on propriety in personal comportment, and concern for the poor to the uses to which his good name are put today.

Kleinbard bemoans the rightwing’s “cartoonish understanding of what Adam Smith actually stood for, and, more important, what should be important to us in thinking about what government can do for us.”

As the bearer of bad news, Kleinbard points out that “the United States is no longer a world leader in economic growth or social contentment” and provides a great deal of text along with 24 charts to prove it.

The United States has the highest poverty rate, the greatest income inequality, and the greatest wealth inequality of any major developed economy in the world. Our parents’ incomes play a larger role in our personal economic fortunes than is true for other peer countries. Our long-term unemployment rate, once the envy of the world, has now sagged badly. Our education system is mediocre, and our healthcare is unaffordable to many, and too expensive for almost all of us.

Along these lines, Kleinbard points out that liberals have made a terrible error in allowing RWNJs (rightwing nutjobs) to use the term “redistribution” rather than a more accurate term (like “earned payments,” for example). Here is Kleinbard’s take on it:

Our vocabulary here betrays us. You can see this if, when reading any article on fiscal policy, you substitute a term like “social investment” or “social insurance” for “redistribution” — the entire tenor of the passage changes.

It is also fun to see Kleinbard dismantle such myths as supply-side economics and the continual attempt to lower tax rates on the rich: “I think of these pillars as laying out the ground rules for a visitation from the Growth Fairy.”

On the downside, for every helpful explanation Kleinbard provides, he also creates a convoluted sentence that sits there on the page, mocking you, defying you to figure out its meaning. Like this gem attempting to explain the part of GDP (gross domestic product) called NIPAs (National Income and Product Accounts) —

The two sets of data are now closely integrated, so that but for the accident of which government entity produces which, the NIPAs and the Flow of Funds Reports can be viewed as one comprehensive record of the value added by the economy and the modes of financing of investments in a specific time period.

The USA outspends everyone on the planet when it comes to the military and healthcare. “The United States contains about 5 percent of the world’s population, but in 2011 we spent almost exactly as much on our military services as did the next 14 largest militaries combined — in fact, 41 percent of the world’s total military expenditures.”

On the other hand, we spend an exorbitant amount on healthcare without getting the healthy outcomes we want.

Putting to one side the moral failings of a society in which 45 million Americans had no healthcare insurance before the Affordable Care Act’s adoption, and looking at matters purely from an economic perspective, healthcare spending is where our dollar bills go to die — all too often followed by us, prematurely.

If we do not move to single payer healthcare — often called Medicare for All — we will be failing ourselves as a nation.

As for another area of our failure, Kleinbard zaps the GOP yet again with: “We all understand that children are our future — except, apparently, when it comes to educating them.”

Allow me to quote one more dig at the conservative f#@ktards who currently control Congress:

Countries employ social insurance as a key component of the social compact because most people believe that to be a member of a society is to have an interest in the welfare of other members of that society. This impulse can be expressed in ethical terms, but it also is based on straightforward economic logic: healthy and adequately nourished citizens are more productive, and will contribute more to the prosperity of society, than will sick and emaciated ones.

Kleinbard outlines a more enlightened fiscal policy, something he calls the Better Base Case. There are many excellent reasons for following this plan, but here’s a brief summary:

We cannot run a government that delivers core services that support the rule of law and basic norms of decency, supervises the largest economy in the world, marshals a military almost as large as the rest of the world’s put together, and indulges itself in the most inefficient healthcare system ever invented, all while spending less on government resources as a percentage of GDP than any other developed economy. Pundits on the right of the political spectrum are quick to tote up the efficiency costs of more taxes, but ignore the welfare costs to our society as a whole from allowing basic functions of government to wither from lack of funding.

While it is sometimes difficult to follow some of the technical aspects of money-flow distributed sub-ratio taxation scenarios (I may have made up that term), there is much in the book to make decent people shout for joy. Just reading the chapter heads and subheads gives you some idea of the aims of this excellent book: “The Happiness of Society.” “Adam Smith, Moralist and Mensch.” “The United States is a Low-Tax Paradise.” “From a Progressive Tax to a Progressive Fiscal System.”

Edward D. Kleinbard in a talk at the Bedrosian Center featured on YouTube —

The post Book Review: What if we Tax and Spend Wisely? – ‘We Are Better Than This’ appeared first on MuseWire.