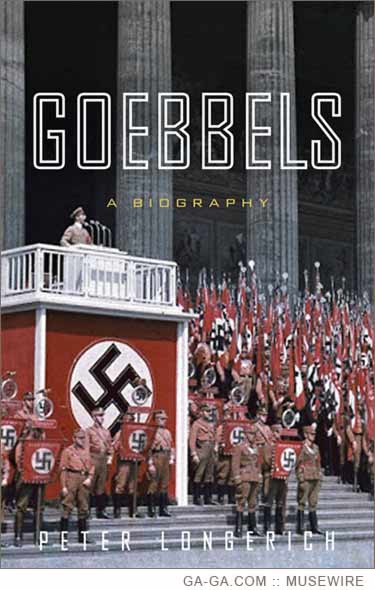 All rightwing minds are degenerate and deplorable but some have more influence than others. One of history’s worst rightwing nutjobs is dissected by Peter Longerich in his hefty biography of Joseph Goebbels, the man with the highfalutin’ title of Reich Minister for Popular Enlightenment and Propaganda.

We’re barely four paragraphs into “Goebbels: A Biography” when this sentence makes the blood run cold: “Goebbels left his wife to make the arrangements for the long-planned murder of the children.”

More details about that gruesome scene appear nearly 700 pages later, including this eerie conclusion to a wretched ultra-Conservative life: “…after his attempt to start peace negotiations with the Soviet Union had been rejected, Joseph and Magda Goebbels murdered their six children and followed Hitler’s example by committing suicide.” In between is a fascinating and disturbing tale of the perversion of humanity.

As appalling as most of us find the ultimate RWNJ horror story, there is some enjoyment in seeing how often reality contradicts the self-reverential passages in the Nazi minister’s diary. Time and again, Longerich contrasts Goebbels’ scribblings with what actually occurred. And there are other occasions for shivery smiles:

* Goebbels referring to himself as “moi” in some entries

* Frequent offhand mentions of Hitler stopping by for a visit (and possibly screwing Mrs. Goebbels — there are oh-so-delicate hints of sexual liaisons scattered throughout many chapters)

* Goebbels admitting that when he couldn’t personally oversee everything, he was happy when things went wrong

Or the official slogan developed upon the occasion of the Nazi war machine grinding to a bloody halt in Stalingrad:

…great, moving, and heroic sacrifice that the German troops who are surrounded in Stalingrad are making for the German nation, together with the impending labor conscription for women and other drastic measures for the conduct of ‘total war’ will provide the moral incentive for a truly heroic bearing on the part of the whole of the German nation and the starting point for a new phase of a German will to victory and for mobilizing all our energies.

With the gas shortage at the time, they didn’t have to worry about trying to fit it on a bumper sticker.

Over the ensuing decades, Conservative leaders have carefully noted the Joseph Goebbels methodology for manipulating masses of morons. This applies to douchebags in our recent past (Joseph McCarthy, Richard Nixon, Barry Goldwater, George Wallace, and the cabal working with Ronald Reagan) as well as the current crop of anti-Americans (Donald Trump, Ted Cruz, Marco Rubio, Reince Priebus, Wayne LaPierre, Roger Ailes, Rupert Murdoch, Karl Rove — we halt here with a note that this list of human detritus could continue for a thousand names).

Religiosity — Like today’s Republicans, Goebbels understood that “Christ did not offer proofs in his Sermon on the Mount… He simply made assertions. Self-evident truths don’t have to be proven.” Today, the amount of irrational assertions in Republican bloviation is often astounding. Entertaining, yes, but also embarrassing to sentient beings.

Media Manipulation — Control of misinformation is a big deal to RWNJs. As Goebbels put it, people’s views are “created by the organs of public opinion such as the press, posters, radio, school, and university and general education.” RWNJs now rely on World Nut Daily, Sludge Report, and the Fox Fake News Channel in place of actual news and commentary. Additionally, six conservative corporations control nine-tenths of the media consumed by Americans — the monoliths are GE, Comcast, News Corp., Disney, Viacom, and CBS. On top of that, the modern rightwinger counts on the bought-and-paid-for pronouncements of fake research groups like the Cato Institute, Heritage Foundation, Focus on the Family, and on and on. A list of current rightwing nutjob organizations is here: http://www.publiceye.org/research/directories/dem_grp_undermine.html

Start ’em Young — Hitler put Goebbels in charge of many aspects of life during the Third Reich: “… schools, universities, cinema, radio, theater, propaganda… The national education of the German people is placed in my hands.” Can you imagine Goebbels licking his chops about controlling education? Actually, you don’t have to imagine it: just watch Rick Santorum express his love of home schooling. Or examine the lies that are presented to children in Mike Huckabee’s line of fact-free educational DVDs.

Anti-Union — In 1933, directly following public events honoring the German worker, “the regime showed the other, authentic face of its labor policy: The unions were forcibly disbanded…” Today’s GOP continues the right’s anti-union activities.

Books as a Threat — The Reich burned books; the right bans books.

Scapegoating — RWNJs must find people to blame for problems of their own making. That is why the Jews were stigmatized, persecuted, and killed under the highly-organized Third Reich. Today, Conservatives use their Republican Party to lash out at the ill, the elderly, the young, the poor, the middle-class, veterans, schools, hourly workers, and minority groups.

By contrast, liberals and progressives point fingers at the true cause of our nation’s problems: Conservatives. (Funny story: As it turns out, Conservatives do not mind being greedwhores, xenophobes, homophobes, misogynists, theocrats, racists, and Fascists — they do mind very much having it pointed out.)

In reading about the horrific leaders of the Third Reich, it is impossible to avoid thinking of comparisons to the lowlife scum on our political scene. Today’s rightwing demagoguery appears to be a creepy updated version of Reichwing demagoguery.

It is also clear that the dirty work was not solely the result of the movement’s leaders — Adolph Hitler, Heinrich Himmler, Hermann Goring, and Goebbels — but also from such contributors as Albert Speer, Martin Bormann, and Rudolph Hess. In much the same way, the evil of conservatism today moves forward with detritus like the Koch brothers, the Walton family, and the DeVos family, not to mention such mental defectives as Zachary Werrell.

Who is that last one? Werrell is the young scoundrel who is now a paladin propaganda minister for any rightwing nutjob douchebag willing to embrace the tenets of the Tea Bagger’s American Taliban agenda; one wonders if he is also keeping a diary full of self-delusion and prevarication.

Should any NRA nuts be reading this review, here is the number of mentions of gun control by any Nazi official: zero. Part of the struggle in Germany prior to WWII was the evasion and eventual defiance of the demilitarization provisions in the Versailles Treaty of 1919. This rebelliousness involved the manufacture and distribution of weaponry on a mass scale. Talk about armed militias!

Buy this book right now on Amazon:
Goebbels: A Biography

This original review is Copr. © 2016 by John Scott G and originally published on “Ga-Ga .com,” before finding its permanent home on PublishersNewswire.com – a publication of Neotrope®. All commercial and reprint rights reserved. No fee or other consideration was paid to the reviewer, this site or its publisher by any third party for this unbiased article/review. Reproduction or republication in whole or in part without express permission is prohibited except under fair use provisions of international copyright law.