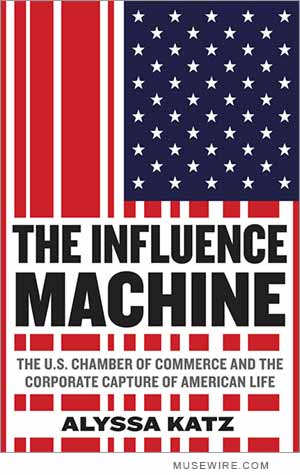 Economic terror appears to be the goal of the U.S. Chamber of Commerce. Reading about their constant efforts to harm the vast majority of people in this country can be dispiriting, but there is the possibility that “The Influence Machine” might act as a beacon for people to rise up against the forces of rapaciousness.

Author Alyssa Katz, who is a member of the editorial board of the New York Daily News, seems to be holding back at times, as if trying ever-so-hard to give the RWNJs the benefit of the doubt. But there can be no mistaking the anti-humanity of most of the reprobates in the Chamber itself as well as the whores in business and Congress who support them.

Worst of all, you pay for a lot of their treachery because of the Chamber’s tax-exempt status.

Befouling the pages of the book is a long list of miscreants and degenerates. Obviously the main villain is Tom Donohue. No, not Tom “Big Daddy” Donohue, the beloved deep-voiced father of progressive rock ‘n’ roll FM radio. The object of our condemnation is Thomas J. Donohue, the president and CEO of the U.S. Chamber. The litany of anti-American activities overseen by this piece of walking excrement is stunning.

Most of those should be familiar to you because of their public shenanigans but others need more light aimed at them. Frank Luntz is the crypto-Nazi purveyor of word games on behalf of the GOP (using “death tax” for the estate tax, for example). DeVos and Van Andel made millions from Amway and are as dedicated to harming ordinary Americans as anyone else in leadership roles behind the scenes of the Greedy Obstructionist Prick party. Eugene Scalia is the syphilitic son of the human turd on the Supreme Court — the seedpod doesn’t fall far from the treason.

Katz acknowledges the totalitarian sympathies of the rightwing nutjob brigade right up front:

The U.S. Chamber is not just a lobbying group, and not just a massive political spending apparatus, and not just a policy shop, and not just a prolific combatant in the courts. It is, rather, all those things wrapped into one — a well-funded influence machine seeking to build an economy where government becomes a tool of big business.

For that is one of the goals of Conservatism: the conflation of government and industry. Their new twist on this totalitarian aim is to put business in charge of the state rather than the other way around as in typical dictatorships; but government becoming “a tool of big business” could serve as a root definition of Fascism.

In this way, all of Conservatism — and therefore all actions of the U.S. Chamber and the Republican Party — works against the core ideals of the United States. In stepping into the media scrum, the U.S. Chamber advances the scurrilous goals of avaricious corporations without drawing the names of those firms into public view. But time and again, Katz turns over the rocks to reveal the slimy acts of money-mad corporate entities, pointing out that

much of the influence of the Chamber happens in battles that most Americans never hear about yet that have profound effects on our lives. The victories that the Chamber has won in trench warfare affect safety on the road and our ability to sue for damages when an injury is done. They shape our prospects of getting affordable insurance, or a mortgage that won’t devour our household budgets. The Chamber is why companies that have repeatedly violated federal laws can still get government contracts. And it has played a pivotal role in widening the economic divide between the very wealthiest in the United States and everyone else.

Katz delves into the fray and highlights the lowlights of case after case. Then she adds 40 pages of notes and citations to enable readers to conduct as much additional research as they can stand.

The book opens quite dramatically with a truck driver falling asleep at the wheel and crushing one woman to death while permanently damaging the mobility of her now motherless son. Who can we thank for the lax rules that allow drivers of big-rigs to remain on the road without adequate sleep or breaks? Why, the U.S. Chamber, of course. And they work very hard to harm America in many ways.

And the same Rules of Greed apply to Big Tobacco, Big Pharma, insurance companies, airlines, auto makers, oil firms, and on and on — all of which benefit from the lobbying and lawsuit efforts of the U.S. Chamber.

(Full disclosure: I have written ads for some of those firms; and before he joined RAND, my dad worked for GE. Considering that your tax dollars funded much of this, I thank you but I am deeply embarrassed about my having helped these loathsome firms.)

The Chamber — along with many other rightwing nutjob organizations — practices something called “quadrakill” when faced with laws that might help protect citizens. They work to (1) kill the bill; (2) try to defund it; (3) try to regulate it out of existence; (4) throw massive amounts of litigation at it to bury it in the courts.

The air you breathe, the water you drink, the food you consume, and the products you buy are all less safe and more dangerous because of the actions of the U.S. Chamber of Commerce — always aided by Republicans and other worshipers of avarice. Alyssa Katz’ book shows you evidence of some of their attacks on democracy. Remember: the voting booth is our way to fight back.

Buy this book right now on Amazon:
The Influence Machine: The U.S. Chamber of Commerce and the Corporate Capture of American Life

This original review is Copr. © 2015-2016 by John Scott G and originally published on “Ga-Ga .com” before finding its permanent home on PublishersNewswire.com, a publication of Neotrope®. All commercial and reprint rights reserved. No fee or other consideration was paid to the reviewer, this site or its publisher by any third party for this unbiased article/review. Reproduction or republication in whole or in part without express permission is prohibited except under fair use provisions of international copyright law.