Positive feelings about the USA can sometimes be in short supply but Stanley B. Greenberg’s “America Ascendant: A Revolutionary Nation’s Path to Addressing Its Deepest Problems and Leading the 21st Century” (ISBN: 978-1250003676) offers optimism and the promise of a better future. Wouldn’t it be great if he’s correct? 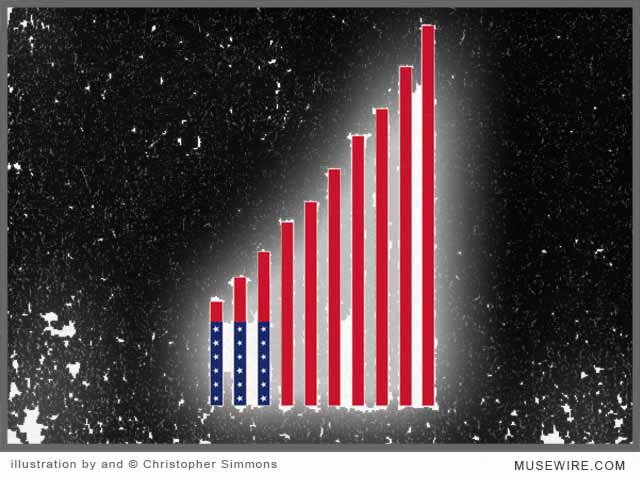 Changes. They frighten some people and excite others. This is especially true, it seems, when discussing such big-ticket items as the economy, society, politics, and race.

Which leads to this important question: will GOP-sponsored hate, fear, and greed take control of our lives, or will the forces of progress rise up to help the nation overcome the challenges we face?

(At this point it must be noted that everything in the world would be so much better if only the perfidy of Conservatism wasn’t among the challenges we face every day!) 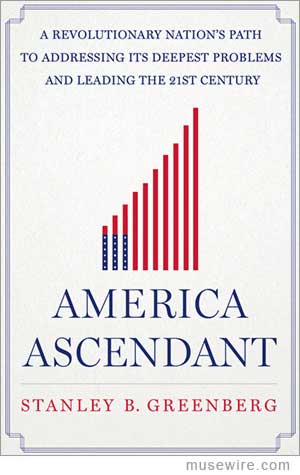 America Ascendant is a book that is optimistic from the very first sentence, “America is poised to lead the twenty-first century, as it led the twentieth.” Comforting words for everybody. After that upbeat beginning, author/pollster Stanley B. Greenberg delves into an examination of numerous facts about our nation.

Facts are scary things for Conservatives, and much of the discussion in Greenberg’s excellent book will undoubtedly scare the crap out of all troglodytes. Consider:

America is emerging as a racially blended, multinational, multilingual, religiously pluralistic society…. For all the problems, that multiculturalism grows more central to our national identity. And today’s major national leaders in politics, civil society, and big companies have accepted the call to find unity in diversity.

By that definition, no member of the Rethuglican party is a major national leader. Which would be really nice but I’m not sure it’s true. The mammon worshipers of the GOP still have quite a lot of power because of their vast base of bigots and buffoons. (Fifty-nine million racist and/or retarded Americans voted for the McCain/Palin Straight-Jacket Express, and sixty-one million of them voted for the Romney/Ryan Crazy Train — this is a profoundly stupid nation in far too many respects.)

Greenberg addresses our national problem with Conservatism time and time again throughout the book. Here is a bit of historical perspective as Greenberg writes about what took place following the 1912 elections:

The conservative Republicans had to be decisively defeated before the progressives could limit the workweek, pass real antitrust laws, regulate railway rates, slash high trade tariffs to favor farmers and consumers, introduce direct primaries to defeat the party machines, require the direct election of U.S. senators, bar corporate contributions to campaigns, introduce an income tax, and give women the right to vote.

Some of those advancements are now taken for granted but it is important to remember that good people had to battle the Conservative forces of evil in order to make society better for all of us.

Racism is part of Conservatism and the book contains a 2,000-word delineation of the myriad ways GOP knuckle-draggers work to undermine America in terms of disenfranchisement. But perhaps we’re approaching a crossroads:

Today, America is at another tipping point, and Democrats are leading the battle for reform because, quite simply, they are aligned with the ascendant trends and because the Republicans are fighting those trends with growing ferocity…. The modern Republican Party’s raison d’etre is to keep the new American majority from governing successfully.

Another way of making that last point is to say that Conservatives are committing treason.

Because of their bigotry, misogyny, homophobia, and xenophobia, “The Republican Party is in a death spiral that will mean the end of the Grand Old Party as we know it.” But is it possible that the Party of Treason will become respectable for anyone with a brain and a soul? Current trends are not favorable:

The party will feverishly put off the end by entrenching itself in the most rural, religious, and race-conscious parts of the country and by exploiting the constitutional bias in favor of small and rural states, but the Republican Party will face shattering losses at some point.

Everyone with a soul or an I.Q. above 80 is so looking forward to us reaching that point!

Removing the GOP’s moron majorities in the House and Senate will require hard-fought battles because Conservatism is a virulent disease that infects so many short-bus riders in this country. There is a frightening demonstration of this in a twenty-four page section of the book that examines the filth and bile that seeps from the typical Republican racist regressive (yes, I realize that last phrase is a tautology).

In many areas of our society, progress is being impeded by Conservatives hell-bent on harming workers, seniors, students, women, non-Christians, non-whites, and the non-wealthy. Greenberg writes about the anti-worker efforts of nearly a dozen traitorous people and organizations:

While workers and unions were struggling financially, the U.S. Chamber of Commerce and the National Association of Manufacturers joined with the Club for Growth, the Koch brothers, Karl Rove’s Americans for Prosperity, big corporations such as Wal-Mart, FedEx, and Exxon Mobile, as well as the tobacco and pharmaceutical industries, to strike a fatal blow. In the GOP-controlled states, public employees and teachers in particular lost collective bargaining rights, and Michigan, the birthplace of the UAW and progressive unions, became a “right to work” state.

As anyone with a conscience knows, right to work means right to work for lower wages (not to mention fewer benefits). But in state after state, and on issue after issue, Greenberg notes how “Conservatives are waging a guerrilla war against reform.”

At the top of the “Politics” section on the website that helps promote my work (gmanmarketing.com if you’re interested), it states: “There’s the Left, which is right; and there’s the Right, which is wrong.” Greenberg shows some of the reasons why:

Democrats more explicitly defend the values of equality, equal rights, and fairness; they place more emphasis on empathy and protecting people from harm; they place a high premium on openness to diversity and acceptance of differences; they celebrate an individualism rooted in individual autonomy; and they uphold education and science rather than religion as paths to discoverable truths.

As the country grows — both in size and maturity of thought — progressives will win in the long run. Yes, that is comforting news, but do not get lackadaisical because the battle with the forces of darkness will be a never-ending one. Strong are the forces of ignorance and greed amongst the Republican hordes. The pestilence that is Conservatism must be combatted today, tomorrow, and forever. That is the only way America can ascend.

Buy this book right now on Amazon:
America Ascendant: A Revolutionary Nation’s Path to Addressing Its Deepest Problems and Leading the 21st Century

This original review is Copr. © 2015-2016 by John Scott G and first published on MuseWire.com before finding its permanent home on PublishersNewswire.com – both publications of Neotrope®. All commercial and reprint rights reserved. No fee or other consideration was paid to the reviewer, this site or its publisher by any third party for this unbiased article/review. Reproduction or republication in whole or in part without express permission is prohibited except under fair use provisions of international copyright law. Editorial cover illustration by and © 2016 Christopher Laird Simmons.