David Brock goes after the American Taliban hate machine in ‘Killing the Messenger: The Right-Wing Plot to Derail Hillary and Hijack Your Government’ (ISBN: 9781455533763). Debunking the anti-Clinton memes and fake scandals is a never-ending job, so let us give thanks that Brock is willing to tackle it.

I used to be a lying asshole conservative douchebag and now I’m trying to make up for it by attacking the crypto-Fascist propaganda of the GOP.

That often seems to be the message from David Brock, the man who used to trash the Clintons but who now leads Media Matters for America, an organization dedicated to calling out right-wing lies.

Back when he was in the Party of Stupid, Brock served his greedwhore masters well for several years before becoming aware of things like fairness, truth, justice, and basic human decency. 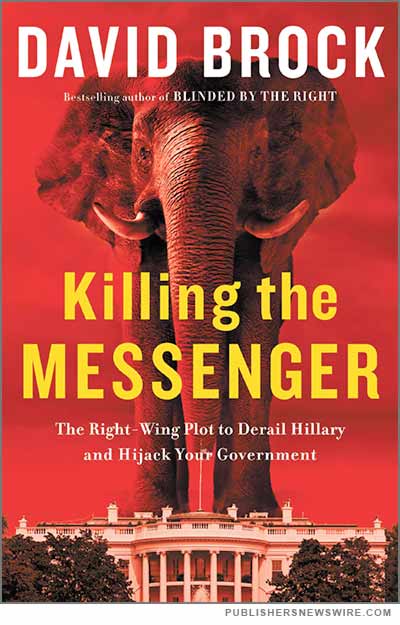 As Brock shows, the GOP is doing tremendous harm to the USA. Obviously, the damage being done by conservative officials is horrifying, but who is funding them? Among the most pernicious may be the malevolent Koch brothers.

Koch tentacles reach out to ensnare you almost everywhere, from educational institutions to your local supermarket. Many colleges and universities have Koch-funded fake research groups or even sections of departments dedicated to spewing right-wing filth and lies. Those two wingnuts and others of their ilk pour money into the following disgusting and deceitful groups:

NOTE: believe it or not, this is a partial list. You might want to check this out: http://www.sourcewatch.org/index.php/Koch_Family_Foundations .

You can fight back with the facts, but also with your weekly shopping. In the grocery store, you can avoid Koch-owned products (Angel Soft, Brawny, Dixie, Insulair, Mardis Gras, Perfect Touch, Quilted Northern, Sparkle, Vanity Fair, Zee).

Every little bit helps in the battle against the neo-Nazis who, in the USA, hide behind the term “conservative.”

manufactured, planted, and outright false allegations can move swiftly and seamlessly from the fringes of the conservative media to the front pages of real newspapers… and how Republican politicians, opposition researchers, and conservative journalists work in cahoots to make it happen.

As you read through the cases on page after page, the enormity of conservative treachery becomes clearer. It’s enough to make you sick. Or, perhaps, angry enough to fight back.

What if some of us devoted a fraction of each day to combat the right-wing nut-jobs? It can be a simple four-step process. All you do is create a statement about the evils of conservatism or about an odious conservative public figure. And then, you disseminate it. Let’s give it a try!

Total time expended: fifty-eight seconds. Yes, for less than one minute per day you can help battle the right-wing nut-jobs who are trying to ruin America.

Here are some possible tweets for you to consider:

* Conservative candidates must be tested for mental illness.

* Marco Rubio lives in terror of taking a polygraph test.

* Conservative candidates must be tested for Alzheimer’s.

* John Kasich has a hermaphrodite mistress.

* Conservative candidates must be tested for treason.

* Donald Trump has a closet full of Nazi memorabilia.

* Ted Cruz is a pedophile.

See how easy that is? And oh-so-much fun, too!

What? You say that this is exactly the kind of underhanded activity that Brock’s Media Matters organization tries to fight? Well, yes. Yes it is. Gosh, I now feel so, so. . . what’s the word? Ambivalent.

Meh, do it anyway. The end result will be helpful for the nation. Don’t worry about the GOP reaction — they can’t get too mad about this because it’s their method of dealing with the media.

David Brock on “All In” with Chris Hayes (YouTube):