Jane Mayer will get your blood boiling in her superb ‘Dark Money: The Hidden History of the Billionaires Behind the Rise of the Radical Right’ (ISBN: 9780385535595). Every chapter reveals monsters who are perverting the ideals of America. 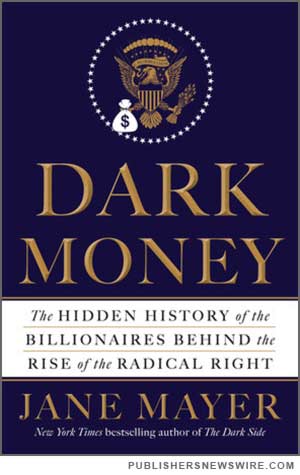 All of those statements come to mind when reading Jane Mayer’s excellent Dark Money, a deeply disturbing account of how ultra-wealthy right-wing nut-jobs are conspiring with politicians, the media, and the educational system to pervert and debase democracy.

Because conservatism itself is built on lies, proposals from conservatives cannot stand up to scrutiny, which means that funding was needed for a cadre of fake “thinkers” who would add plausibility to an otherwise threadbare and unconvincing storyline.

In other words, a conservative con job.

The idea of the phony think tank was a conservative scheme. Mayer documents how troglodytes initially worked to “disguise their organization as neutral and nonpartisan,” how they established an additional 150 fake think tanks around the world, and how a great many more have been funded by money from right-wing ideologues. Their purpose:

They introduced doubt into areas of settled academic and scientific scholarship, undermined genuinely unbiased experts, and gave politicians a menu of conflicting statistics and arguments from which to choose.

Mayer explains how the Koch brothers modeled part of their outreach on the Nazi youth movement. Charles Koch put “millions of dollars into educational indoctrination, with free-market curricula and even video games promoting his ideology pitched to prospects as young as grade school.”

Shockingly, a tremendous amount of right-wing nut-job propaganda is taking place at American institutions of higher learning. “By 2014, the various Koch foundations alone were funding pro-corporate programs at 283 four-year colleges and universities.”

Because the right-wing is always against the best interests of humanity, they need legal backing for their nefarious activities. In the 1980s and ’90s rich conservatives began going after law schools to make it easier to pervert the aims of up-and-coming lawyers.

As the courts expanded consumer, labor, and environmental rights and demanded racial and sexual equality and great workplace safety, conservatives in business were desperate to find more legal leverage.

One reason there are so many conservative attorneys is the right-wing propaganda that schooled them. Conservatives “scattered more than $10 million to Harvard, $7 million to Yale and Chicago, and over $2 million to Columbia, Cornell, Georgetown, and the University of Virginia.” For starters. Things have gotten worse, as Mayer illustrates.

Dark Money is a shocking litany of the people and groups who are fiscally raping the United States and the majority of its citizens. Charles and David Koch are the most pervasive representatives of the pestilence known as conservatism, but there are plenty of others whose nefarious activities are exposed, including Corbin Robertson Jr. (a coal kingpin), Harold Hamm and Larry Nichols (fracking fiends), Philip Anschutz (very oily), Art Pope (currently attempting to destroy North Carolina), Foster Friess (misogynist mutual fund millionaire), and the DeVos family (the a-holes from Amway).

These and many other enemies of America show up in the book, often alongside the plutocrats, including such denizens of the dirty backroom deal as senate majority leader Mitch McConnell, former senator and current head of the Heritage Foundation Jim DeMint, and lobbyist Ed Gillespie.

Revealed in the pages of Mayer’s well-researched work is the fact that the loathsome programs of Rush Limbaugh, Glenn Beck, and Mark Levin are subsidized by the forces of plutocracy and oligarchy.

The company that syndicated Limbaugh’s show, Premiere Networks, meanwhile, was getting paid a handsome $2 million or so a year by the Heritage Foundation to push the think tank’s line on issues….

For an annual payment that eventually topped $1 million, Beck read “embedded content” written by the [RWNJ] FreedomWorks staff. They told him what to say on the air, and he blended the promotional material seamlessly into his monologue, making it sound as if it were his own opinion. The arrangement was described on FreedomWorks’ tax disclosures as “advertising services.”

In 2010, [Koch’s] Americans for Prosperity hired Levin to promote it on his nationally syndicated talk radio show, thereby copying the deal that FreedomWorks has struck with Glenn Beck.

It is apparent to anyone who glances at Mayer’s evidence that conservatism exists only to aid the wealthy and benefit multi-national corporations. As if that wasn’t sickening enough, numerous treasonous actions of the GOP, ALEC, and the Tea Party are delineated in various sections of the book. All of their work damages the country as a whole, and much of what they do harms the economy in many ways.

Well-written, horrifically fascinating, and impressive in its scope and breadth, Dark Money is the book of the year.