From a force for good to today’s evil incarnate, the Republican Party has had its rare ups and insidious downs before arriving at their current position as supporters of gridlock, corporatism, oligarchy, and all things anti-humane. In “To Make Men Free: A History of the Republican Party” (ISBN: 9780465024315) the whole sordid story of the GOP is told by Heather Cox Richardson in lightning-fast segments. 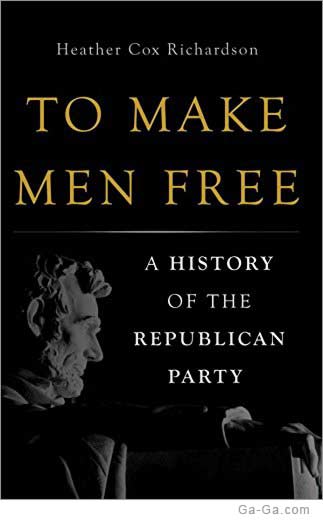 Considering the anti-Americanism of today’s Republican Party, it is difficult to imagine they were ever on the side of truth and justice. But once upon a time, being Republican meant being for worker rights, for public education, for progressive taxation, for government action on behalf of Americans, and for equality under the law — all things the GOP abhors today.

Greed, arrogance, and racism can do strange and terrible things to evil people, and a peek at the ample evidence from the Congress in Washington and legislatures in the moron-majority states, today’s Republican Party is obviously comprised of some of the most malevolent people in our nation’s history.

In this, her fourth book, Boston College professor of history Heather Cox Richardson has managed to encapsulate the entire saga of Conservative deceit, perfidy, and inhumanity into one medium-sized fast-paced volume. She does so by writing in broad strokes to keep things moving like a runaway freight train. All the hellishness of the Fascist mentality so beloved by Republicans shows up in quick paragraphs that could so easily have had entire chapters devoted to them.

Despite the deluge of delusional conservative “thinking” that she is forced to reference or quote, her tone never becomes arch. While the book is by necessity a catalog of horrific ideas from despicable people, she manages to remain above the fray, just reporting the facts as they lie there, squirming in her sudden shafts of light.

Chronicles of the Damned

It sometimes feels as if upright people have been condemned by an unjust god who is forcing us to live under horrible legislation enacted by the troglodyte GOP and its fellow travelers — but as Richardson shows, it is Conservatism and the Republican Party that comprise the legion of the damned. The rest of us are doomed to suffer from their actions unless we get organized and remove them from positions of responsibility.

Historically, they had only a few brief shining hours of civility before repeatedly sinking into the abyss with such detritus as Taft, Hoover, Nixon, Reagan, the Bush cretins, and the turncoats of today as exemplified by McConnell, Boehner, Cruz, Paul, Perry, et al.

Giving them an Excuse

There is nothing at all random about the Republicans’ ideological shifts. They reflect the GOP’s ongoing renegotiation of the party’s — and the nation’s — central unresolved problem: the profound tension between America’s two fundamental beliefs, equality of opportunity and protection of property.

Nice try at letting them off the hook but there’s no getting around the sedition exhibited by the fourteen RWNJDBs who gathered on the night of Obama’s inauguration to plot how to grind legislation to a halt into order to harm the Democratic president — that they were harming America seems to have not bothered them one bit.

Regular readers of this column will recognize some of those names as among the most loathsome creatures who ever held leadership roles in government. The morally bereft Kevin McCarthy is now the majority leader in the House; Paul “Lyin’” Ryan ran for vice president on the ticket with Unfit Mitt; Jim “gimmie the big bucks” DeMint has moved to the Heritage propaganda foundation where he serves as the Hermann Goebbels of the GOP; and Frank Luntz continues in his role as the Albert Speer of the Republican Party.

As early as the decade after the Civil War the Republicans began adopting their current odious practices:

By the 1870s, more than thirty years before Russia’s Bolshevik Revolution, powerful Republicans were railing against the “socialism” and “communism” that might lead government to redistribute wealth to African Americans and immigrant workers through public works projects and social welfare legislation paid for with tax dollars.

The party began to focus on defending the interests of big business and money and power concentrated at the top of society.

In the 1880s, voters turned to the Democrats, and the Republican Party took steps to restrict voting and jiggered the electoral system to stay in power.

While claiming to be championing “laissez-faire” government, Republicans and the policies they pursue have been anything but evenhanded; they have protected an increasingly small wealthy population at the expense of America’s majority.

If that sounds familiar it’s because that is now part of the GOP playbook. But wait, there’s more. Consider this comment about the GOP actions in the 1870s:

Over the next two decades, a new generation of Republican leaders solidified the party’s swing toward big business. They abandoned the idea that the economy grew from the bottom up and began to argue that it grew from the top down.

Along with a brief acknowledgement of the GOP’s “propaganda war is this observation: “When workers tried to organize so they could bargain more effectively, Republicans howled about communism and wrote laws to undercut labor unions.”

If that sounds… Well, I could go on for several more pages with this litany.

Observations about the duplicity of Conservative nutjob Republicans show up in every section of the book. For example, there are twelve pages devoted to Joseph McCarthy’s witch hunt but no mention of how Ted Cruz is following the McCarthyism script. There are a total of 31 pages devoted to such human detritus as the John Birch Society, William F. Buckley, Jr., the Ku Klux Klan, and Barry Goldwater, but no indication of remorse or regret for embracing such effluvia.

The Reagan administration’s disastrous economic policies, lawlessness, cronyism, sanctimony, and attempts to create an oligarchy in the USA get seventeen pages. There are damning descriptions of Ken Starr, Newt Gingrich, the Fox fake news channel, and all of their protestations and pontifications that were, as Richardson notes, “unencumbered by facts.”

Okay, time for one more damning description from the Intro:

Three great presidents, Abraham Lincoln, Theodore Roosevelt, and Dwight E. Eisenhower, advanced a new, progressive vision of America, only to have their vision come under attack from forces within their own party. In each era, opponents of government activism used racism, xenophobia, and antitax rhetoric to destroy Republican programs designed to advance economic opportunity. Party leaders then tied the party to big business, abandoning entrepreneurs and small businessmen as well as rising workers. Wealth moved to the top echelons of society, until, in each era, a crash destroyed the economy.

All the stupidity of today’s GOP has a foundation in their earlier stupidity. As can be easily viewed in Richardson’s straightforward presentation, the anti-worker, anti-government, anti-safety-net, anti-financial regulation, anti-healthcare, anti-equality, anti-immigrant, anti-humankind, and anti-USA policies of today’s Republican Party have historical precedence.