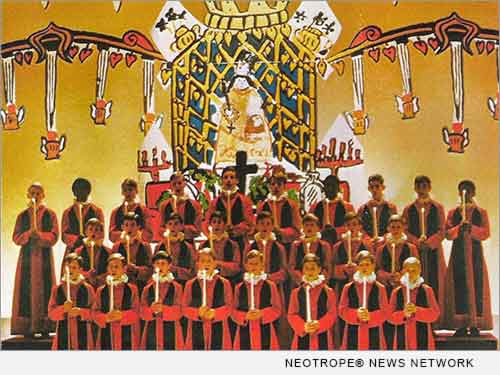 A film documentary commemorating the 70th Anniversary of the Texas Boys Choir screened at 7 p.m., Feb. 18 during a special ceremony at the Modern Art Museum of Fort Worth. The documentary – literally seven decades in the making – explores the vast and rich history and legacy of the boys choir. It is written and directed by Gary McGrath, a TBC alum who also is executive director of The Texas State Men and Boys Choir.

Also, the Men’s Choir are releasing their debut record this month under 4818 Records, distributed through Universal Music Group.

“This is our gift to the city of Fort Worth honoring the Texas Boys Choir – one of the crown jewels of the city,” McGrath said. “You’ll enjoy it. It was a labor of love for me.”

The TBC alums who comprise The Texas State Men and Boys Choir sponsored the event. Members of the men’s choir also performed at the event.

According to McGrath, the screening served not only as a boys choir commemoration but also as an attention-getter to help recruit more youngsters and TBC alum to sing for the TSMBC.

“Many former members of the Texas Boys Choir grew up to become members of our Texas State Men and Boys Choir,” McGrath explained. “Now we’re helping train the next generation of young singers with our group.”

McGrath just finished guiding the TSMBC through its first year of existence:

• The Texas State Men and Boys Choir enjoyed a very successful Dec. 16 Christmas concert they performed with The Dorothy Shaw Bell Choir at Arborlawn UMC in Fort Worth.

• In the summers to come, the Men and Boys Choir is expected to take international tours of Spain, Scotland and Italy.

“This is our gift to the city of Fort Worth honoring the Texas Boys Choir – one of the crown jewels of the city,” McGrath said.

As an example, McGrath offered a recent performance on the following YouTube clip: https://youtu.be/Lu3r5dES8Zo .

McGrath encourages anyone with interest in joining the men and boys choir to contact him.

“Anyone with a son, nephew or grandson who would be interested in joining – the treble boys choir is for youngsters second grade and up – should contact me as soon as possible,” McGrath said.