“And What is Hell – A True Story: Exposing The Dark Secrets Of ‘The Insane Asylum'” was released today in its second printing (ISBN: 978-0989901765). This compelling true story is all about religious freedom and Christian faith. 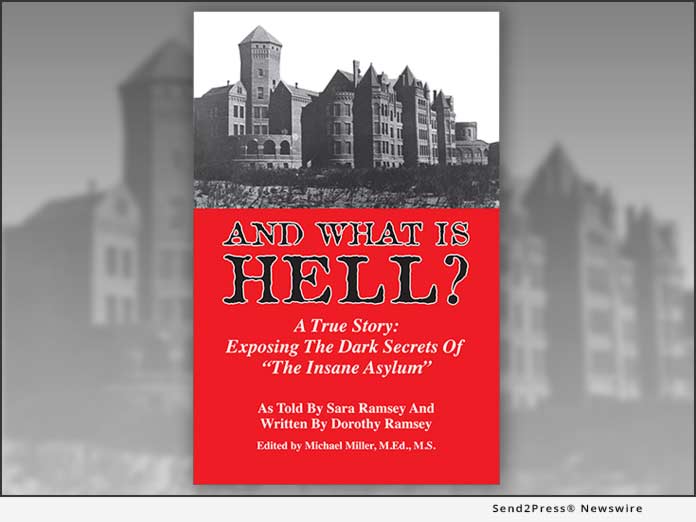 “And What is Hell – A True Story: Exposing The Dark Secrets Of ‘The Insane Asylum'” was released today in its second printing (ISBN: 978-0989901765). This compelling true story is all about religious freedom and Christian faith.

“I did not know it was hell until that first night! A place of cruel torture, of starvation, of murder, of flagrant injustice, of hatred, of despair, of envy.” — As told by Sara Ramsey and written by Dorothy Ramsey.

Sara and James, who with all their hungry souls sought the truth and understanding of God’s Words, (as evidenced by her poetry throughout the book), were apprehended on December 18, 1912, judged and committed without a trial or defense for being impoverished street preachers and for living together while not being legally married by the laws of man.

Whether sent by a judge or family member, the poor unfortunates institutionalized lost every freedom and were deprived of human rights and dignity. The horrors were indelibly impressed in Sara’s mind. She felt if she told her story it could save others from anguish and torment.

This story is important because people are important. How we treat the young, the elderly, weak, vulnerable, mentally ill or physically ill, the poor and homeless is ultimately a true reflection of our society.

“And What Is Hell” tells a true story of Christian street preachers of 1920’s Los Angeles and is a chilling and compelling story of deep faith. The reader follows the absolute horror experienced by Sara and James Ramsey who were locked up at Patton Street Mental Hospital in San Bernardino, California because of how they expressed their Christian faith.

The abuse, mental and physical cruelty and the degradation experienced is accounted in great detail and is completely factual.

“And What is Hell” is written by Dorothy Ramsey, who was the daughter in law of Sara and James Ramsey. The author gathered suitcases of extemporaneous notes, reviewed diaries and conducted extensive interviews in order to write this true account.

This project took over 50 years to write and produce. It was Dorothy Ramsey’s final wish in her life to get this true story of this Christian struggle published. Her hope was this remarkable story of faith displayed by Sara and John Ramsey would inspire others to grow their faith and learn of the power of Jesus Christ.

Dorothy Ramsey’s long-time life goal started to come to fruition at the age of 93 when She asked her oldest Grandson, a noted academic scholar and author, Dr. Michael Miller to help her. Together they organized the book from thousands of loose pages tucked away in an old Suitcase. Dr. Miller also painstakingly Edited the book. They worked on this project for two years, and finally at the age of 95, the book was published by Pyramid Press.

“It’s hard to put down and with each page turned the reader is more and more drawn into the remarkable terror of being locked in an insane asylum simply for having different religious beliefs,” said Rev. Ray Baker.

“This book illustrates how society discriminates agonist Christian’s and those of faith. This is also a story of redemption and the power of deep Faith while actually living in a true Hell on earth,” said Right Reverend Richard Wardell.