“Circumcision Scar” (ISBN: 978-1734555806), an unflinching memoir by Jay J. Jackson, details his lifelong struggle with recurring nightmares that he ultimately realized were repressed memories of his neonatal circumcision. 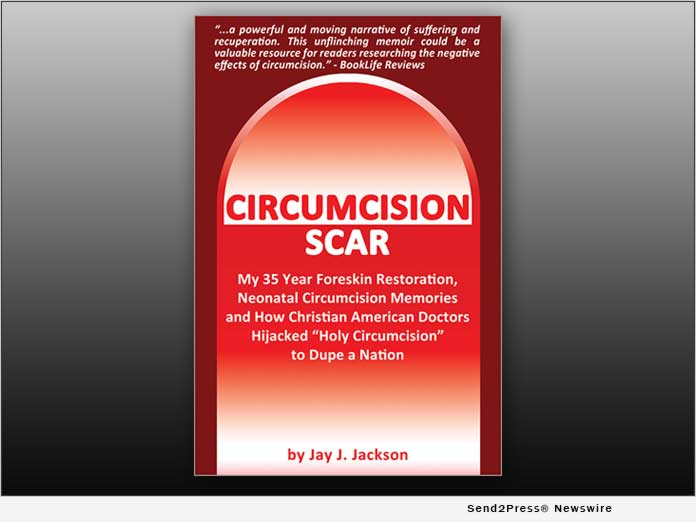 “Circumcision Scar” (ISBN: 978-1734555806), an unflinching memoir by Jay J. Jackson, details his lifelong struggle with recurring nightmares that he ultimately realized were repressed memories of his neonatal circumcision. In his 20s, doctors branded Jackson immoral and perverse for suggesting circumcision caused his erectile dysfunction and refused to offer treatment.

Jackson states, “Those doctors didn’t chase me out of their office spitting venom because they cared about my health. They did it because I exposed blatant malpractice in violating their oath to do no harm. It’s illegal to operate on healthy flesh to cure a malady that doesn’t exist.”

Jackson underwent two experimental surgeries to restore his foreskin, hoping it would cure the erectile dysfunction his circumcision caused, only to be abandoned by hospital nurses who refused to care for him because they didn’t approve of what he’d done.

Jackson explains, “Hospitals are where foreskins go to die, and to have mine surgically restored was considered obscene by these unprofessional hypocrites. I felt raped by a religion I wanted nothing to do with and needed to reclaim ownership of my own body. I’ve been with my husband 30 years, and he never knew what I’d done until he read my book.”

Jackson equates circumcision as a human rights violation and outright sexual abuse. “The doctor credited with making circumcision mainstream in America was obsessed with circumcising women too. He believed circumcision would cure mental illness, blamed a patient’s foreskin for his brain tumor, and said circumcision was a humane alternative to castration in curing black men of their predisposition to be rapists.”

Jackson believes readers of his book will refuse to hear the facts. “Men are oblivious to the fact that their penis was cosmetically altered at birth, and doctors are trained to uphold that lie. Seventy percent of medical books intentionally omit foreskins, and doctors are willfully forcing their religion onto a nation of free people.”

Jackson’s book debunks the alleged health benefits of circumcision and states comparing it to a vaccine for HIV/AIDS is delusional. “They used that exact argument for circumcision and syphilis a hundred years ago, but the statistics don’t hold up. Foreskins aren’t the plague. They’re a natural part of the male anatomy.”

Jay J. Jackson lives in Los Angeles and hopes his story will inspire parents to protect children over protecting religion. “No parent wants to believe they’ve harmed their child for no reason, but that’s the lie these doctors have forced upon us. Every child has the right to be who they were born to be.”

“Circumcision Scar – My 35 Year Foreskin Restoration, Neonatal Circumcision Memories, and How Christian American Doctors Hijacked Holy Circumcision to Dupe a Nation” is available in hardcover and Ebook on September 8, 2020.

Read the first chapter at: https://www.circumcisionscar.com/.