Aaron Ozee, celebrity author of the international bestselling children’s book, “Regulus” (ISBN: 978-1387010790), and ingenious director of the “Regulus” movie, has officiated the execution of a secret philanthropic mission to send physical or digital copies of “Regulus” (known as Operation Red) to Ukraine to distract any children facing the unimaginable horrors of the 2022 Russian Invasion. 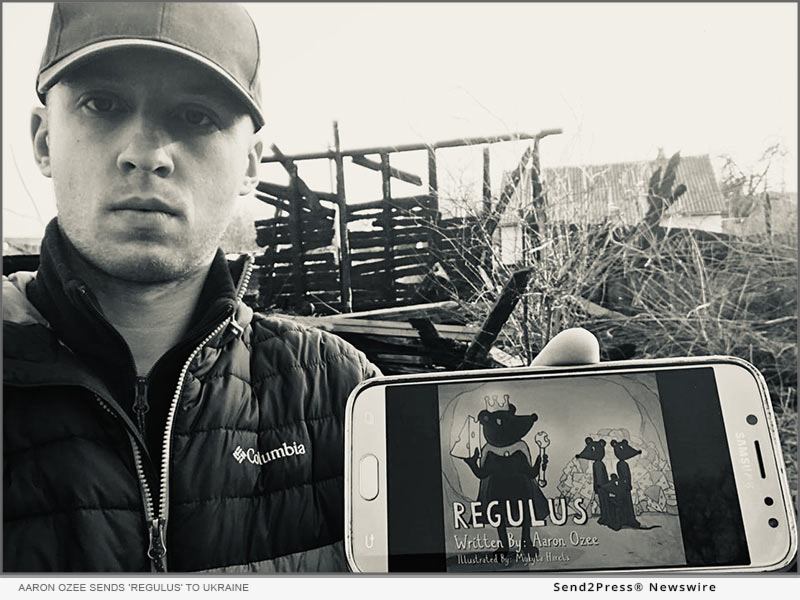 Aaron Ozee, celebrity author of the international bestselling children’s book, “Regulus” (ISBN: 978-1387010790), and ingenious director of the “Regulus” movie, has officiated the execution of a secret philanthropic mission to send physical or digital copies of “Regulus” (known as Operation Red) to Ukraine to distract any children facing the unimaginable horrors of the 2022 Russian Invasion.

Businesses spanning across numerous industries operating around the world, such as Microsoft and Coca-Cola, have made the choice to either temporarily or permanently suspend their efforts in Russia to protest against the unprovoked invasion of Ukraine. Besides developing the plan for Operation Red, which has been set in motion for the duration of the 2022 Russian Invasion, Ozee has made the decision to endorse this monumental alliance of vendors by removing his collection of published works from the inventories of distinguished retailers across the country.

Despite launching Operation Red for the duration of the 2022 Russian Invasion, and banning the sale of his collection of published works in Russia, Ozee has found even more ways to contribute in donating royalties earned from his international bestselling children’s book, “Regulus,” earned from the global streaming of the “Regulus” movie, and earned from crowdfunding initiatives that celebrity shoutout networks such as Cameo have organized to raise money from the engagements their impressive library of talent have with fans.

Ozee has never been someone who follows anything our society considers “normal,” especially knowing that Ozee has always sought to break away from the expected so that he may achieve the unexpected. The former months have given birth to many new projects underneath the belt holstering a plethora of successful ventures that he carries with him everywhere he goes.

From partnering with BitClout, a decentralized social network, to open an initial coin offering (ICO) for his own cryptocurrency, Ozee Coin, to founding a dedicated merchandise storefront called Ozee Merch, with hundreds of assorted products featuring his likeness and that of his infamous rat king character, “Regulus.” Each of these new projects have become another path for Ozee to donate royalties earned, just as Ozee has done with other fundraising efforts, to an organization devoted to helping those in Ukraine known as Choose Love.

Since the beginning of the 2022 Russian Invasion, and even more recently, Ozee has chosen to voice his momentous beliefs about the exacerbated combat in Ukraine. However, unlike any of his statements from earlier weeks, Ozee made a formal declaration of war against the President of Russia, Vladimir Vladimirovich Putin, and the Government of Russia.

“Nations fear the idea of emerging nuclear conflict, as they rightfully should, but more so the day when they will have to declare war against Russia. However, even with such an unthinkable scenario at the doorstep of every sovereign territory, it will be an option that is likely to never be considered. Our leaders may have made the conservative decision to rise above your foolish actions with the intention of avoiding ridiculous combat, but that does not mean that we as people of this world must watch as you exercise your command to kill. And, with that said, I, Dr. Aaron Ozee, and Regulus, King of the Mice, declare war against you, Vladimir Vladimirovich Putin, and the belligerent regime that you have constructed as your engine of death.”

News about the 2022 Russian Invasion has fallen into the hands of just about everyone on this planet who chooses to remain apprised of current events, and with countless perspectives about the 2022 Russian Invasion pressuring the virtual universe, it can be somewhat troublesome for most people to disconnect truth from speculation. However, even with that being known, what Ozee mentioned in his formal declaration of war against Russia makes the stance of most of the world irrefutably clear as day. “You may have started this war, but you can be assured, Vladimir Vladimirovich Putin, that we are going to end it. Soon enough you, and your destructive military operations (as you have often described them), will be defused. Be ready for what comes next.”

For anyone wanting to stream the “Regulus” movie on Amazon Prime, you will need to register for your Amazon Prime membership or visit https://www.RegulusMovie.com.