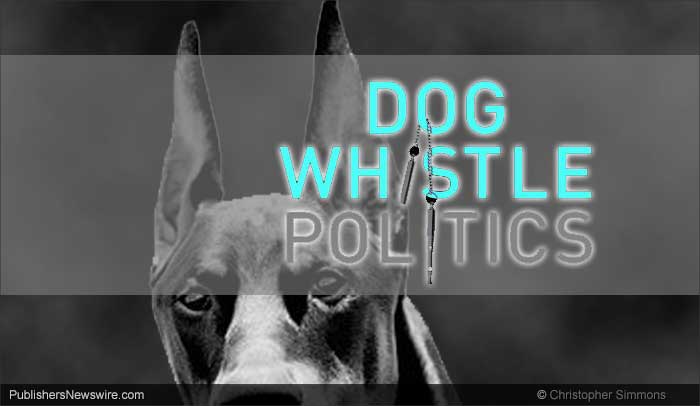 In the most important American book of the year so far, Ian Haney Lopez presents a ton of facts and a mountain of logical deductions about race, politics and the nation’s future in “Dog Whistle Politics: How Coded Racial Appeals Have Reinvented Racism and Wrecked the Middle Class” (ISBN: 9780199964277; Oxford University Press). Reading it is like pulling off a scab.

Incendiary and unsettling, “Dog Whistle Politics” spares no one in terms of race, racism, and racial politics. Author Ian Haney Lopez excoriates the soul of America while shining a spotlight on the guilt and guile of everyone, although special attention is focused on the vermin of the Republican Party. 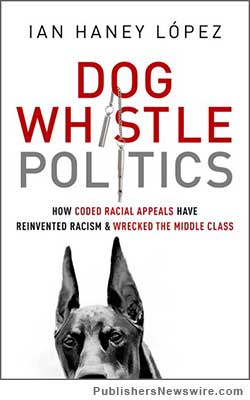 While introducing the subject matter, Lopez provides his own one-line summary, pointing out that the book “explains how politicians backed by concentrated wealth manipulate racial appeals to win elections and also to win support for regressive policies that help corporations and the super-rich.”

You have to admire how he pulls no punches; this is the first line of the opening chapter: “Let’s start with an open secret: Republicans rely on racial entreaties to help win elections.” Very soon after, he writes:

How has the GOP managed to elicit racial loyalty despite a national revulsion toward racism? The answer lies in the GOP’s use of coded language. Its racial entreaties operate like a dog whistle — a metaphor that pushes us to recognize that modern racial pandering always operates on two levels: inaudible and easily denied in one range, yet stimulating strong reactions in another.

Even Michael Steele, one of the rightwing nutjob Uncle Toms (to display a bit of racial profiling), is quoted in the book and acknowledges the racial sins of his employers, albeit pretending the misdeeds are in the past. Listening to the professional prevaricators of the right is a time warp type of situation because there is always the promise of a “new GOP.” Kind of like the promise of a “new Nixon” in the nineteen sixties (prior to his approving of burglary and wiretapping and money laundering and, oh yes, covertly bombing other countries).

Sometimes we get caught up in the view that racists look like the slack-jawed yokels in movies like “Mississippi Burning” or “12 Years a Slave,” but it is a much bigger problem than that. As Lopez writes, “We have learned to see racism in the spittle-laced epithets of the angry bigot. We must also learn to see racism in the coded racial entreaties promoted by calculating demagogues.”

Method to the Madness

Lopez is excellent at exposing many of the code words and phrases used by corrupt and venal GOP politicos, terms they have relied on for decades, including “entitlement reform” (which stands for the destruction of earned accounts such as Medicare and Social Security), “quotas” (which refers to the bigot’s fear of affirmative action), “law and order” (meaning “laws to keep Blacks and Hispanics in their place”), “welfare queens” (casting doubt on the need for food by poor families), and “makers and takers” (disparaging children, seniors, the disabled, the ill, and the needy).   In addition, the “Southern Strategy” is dissected, including out that it is not simply a regional issue but a national problem that affects all of us:

Yes, the South inherits an ugly strain of racism, and nowhere is dog whistle politics more fecund. After 2012, Republicans controlled all 11 state legislatures of the former Confederacy, and their campaign tactics centered more than ever on depicting themselves as the white party and Democrats as beholden to minorities. But this is a far cry from saying that what happens in the South stays there. On the contrary, the Republican’s political dominance in the South, combined with its racial roots, ensured an outsize influence for racial politics nationally, especially in Congress.

Much the same thing was imparted to me by my dad when I was writing an essay in college but it was more difficult to find sources to cite back then. Now we have many sources besides Lopez, for which America should be eternally grateful.

Since this section begins with a discussion involving principles, republicans need not bother to read any further for fear of their heads exploding. Lopez writes that “to ensure broad prosperity government has four crucial roles to play…”

first, to help people weather the vicissitudes that easily plunge families into poverty, for instance job loss or ill health; second, to provide escalators of upward mobility, such as quality schooling, higher education, and mortgage assistance; third, to build the nation’s infrastructure, thus laying the groundwork for the next great economic boom; and fourth, to rein in marketplace abuses through regulation, and to prevent excessive concentrations of wealth through progressive taxation.

And the GOP is continually working diligently to undermine, thwart, dismantle, or eradicate every one of those principles. “We are in the midst, not at the tail end, of a sustained attack against liberal government…”

as evident in the agenda of the Republican-dominated House of Representatives, though perhaps it is most obvious at the state level. Look at what has happened where Republicans have captured both the executive and legislative branches, including in states like Wisconsin and North Carolina that until recently stood out as relatively progressive. Despite large public demonstrations protesting GOP extremism, Republicans have set to destroying liberal achievements with a vengeance, slashing funding to education, attacking unions, and gutting unemployment insurance, while ramping up efforts to further disenfranchise minority and working-class voters.

How can republicans win any elections when their politics and policies are so obviously anti-American? It is Lopez’ contention that their dog whistle phrases appealing to race obfuscate their true intentions and thus contribute to the wrecking of the middle class as stated in the subtitle of his book. He lays out an extremely persuasive case and you are not likely to walk away from this book unshaken.

“Racial demagoguery convinced many whites to think about government help in terms of race, and then to reject liberalism and the lessons of the New Deal in favor of the nostrums promoted by corporate titans and loaded insiders.” Lopez includes lots of examples of the use of dog whistling by George Wallace, Barry Goldwater, Richard Nixon, Ronald Reagan, Mitt Romney, Paul Ryan, the tea baggers, Fox Fake News channel, RWNJ hate radio bloviators, and on and on.

Do some Democrats also get taken to task in the book? They do indeed, but the overwhelming percentage of perfidy is, as you would expect, from the GOP, a party that is “essentially defined by race: it is almost exclusively supported by and composed of whites.”

The idea that our Constitution is colorblind is pervasive. Although obviously wrong (there’s that three-fifths of a person thing in Article 1), the neo-con’s misuse of the term is dismembered in the book. “Today, conservative advocates of colorblindness use this term as a shorthand for their opposition to affirmative action. They contend that colorblindness means government should never take race into account, not even as a way to promote racial equality.” And later, “Beyond this, the popularity of colorblindness stems from casting whites as victims of racism, and from its practical implications in preserving the racial status quo.”

It is Lopez’ contention that liberals, progressives, and independents — all of America’s decent people, basically — should not shy away from calling out the racism of the GOP or wherever it may appear. The fundamental ideals of the US are in many ways dependent on our battling of the GOP plutocratic white peoples’ party.

Attacking the bedrock principles of fairness is a primary goal of the GOP and their anti-American effort can only succeed via subterfuge and deception. If voters knew the aims of republicans and their masters, the GOP would poll at about fifteen percent of the electorate.

As one among a range of “social issues” used by conservatives, racial dog whistle politics can be understood as a part of a larger effort to flimflam voters by substituting one meaning of liberalism for another. Demagogic politicians hector voters to oust the permissive liberals who coddle nonwhites, women, gays, criminals, and atheists, though often the actual target is the liberal policies that help the middle class and temper capitalism. Righteously attacking social liberalism becomes a surreptitious way to defeat economic liberalism… race has been the principal weapon in the right’s arsenal against New Deal liberalism… racial appeals exist within a larger pattern wherein conservatives stoke cultural divisions as cover for a politics that primarily serves the very wealthy.

…with help from the Heritage Foundation, Bush pushed through one of the biggest tax cuts for the wealthy ever enacted. In 2001, Heritage helped sell Bush’s tax cuts with the bold prediction that they would lead to economic growth sufficient to pay off the national debt by 2010. In 2007, with the budget deficit ballooning to historic highs, Heritage reversed course and looked to dog whistle appeals to cover up how wrong they and the Bush administration had been. Now they claimed that it was “entitlement spending” that was dwarfing the “projected large revenue increases” that the tax cuts had supposedly generated.

I am leaving out a ton of great examples, stories, and demonstrations in this superb work, for there are items about Unfit Mitt, Lyin’ Ryan, the odious Koch brothers, the tea bagger bigots, Dick “Dick” Cheney, Rupert Murdoch, Roger Ailes and his Fox Fake News channel, and the entire RWNJ enterprise of constant deceits, mendacities, defamations, and nonsense. There is also a chapter that suggests some changes that the enlightened side of human nature might effect to bring our nation back on the proper course.

Lopez frequently lays out the damning evidence in an unassailable brick-by-brick manner. Sometimes he skips to a logical conclusion about the demeaning actions of conservatives. Either way, reading this book will make you see the world differently and better. “Dog Whistle Politics” ranks with Chris Mooney’s “The Republican Brain” as among the giant achievements of 21st century non-fiction.