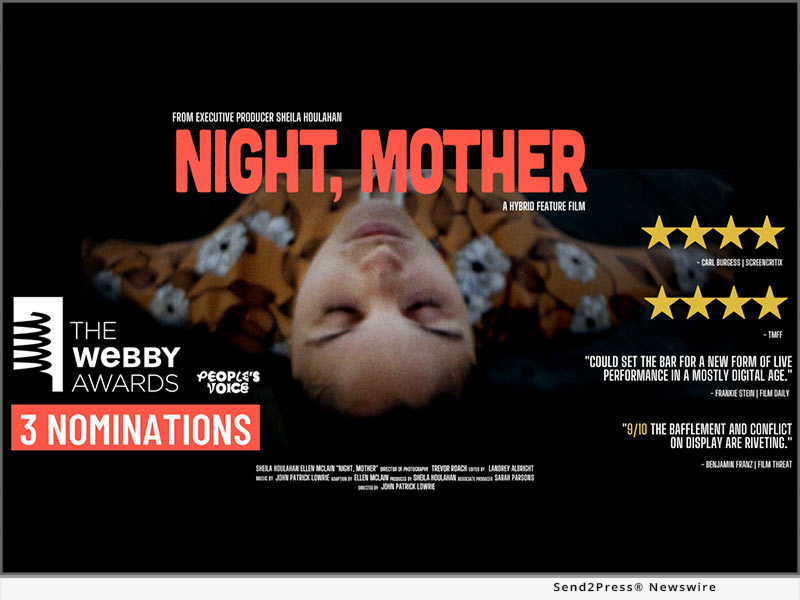 Filmed in 2021 on Twitch.tv during the height of the pandemic, this daring new “hybrid-film” merged cutting edge audience integration and live performances with traditional cinematic media, all while curating accessible/equitable mental health resources and LMHC on-call moderators for all audience members.

A post-film panel discussion centered on mental health and suicide prevention with notable panelists such as Khleo Thomas (Holes) and Eve Crevoshay, Executive Director of “Take This.”

“I wanted to ensure that our audience was taken care of while being exposed to incredibly triggering content,” said Executive Producer Sheila Houlahan. “Twitch.tv gives filmmakers access to dialoguing with audience members in real time, and it only made sense that we’d have resources/cool-down rooms/LMHC providers available to any and all who would need them.”

As a zero-budget production, “Night, Mother” is an astonishing contender in the company of fellow nominees such as: Call of Duty, Blumhouse, Paramount, and HBO Max.

“I can’t believe this is happening! What a dream it is to see a narrative about suicide next to some of the greatest names in media today,” stated Houlahan in response to the nominations.

“Night, Mother”: Watch it now on Twitch at: https://www.twitch.tv/nightmotherontwitch .

Sheila Houlahan is an Indian-American actress, producer, singer, and writer best known for her work in Warner Bros. “The Little Things,” Sony/Universal’s “Ambulance” and Lionsgate’s “Beloved Beast.” Houlahan is a Celebrity Champion for Project HEAL, a nonprofit organization that helps people suffering with eating disorders pay for treatment. She is also an ambassador for Ability Magazine and their new platform AbilityE, which seeks to increase inclusion and representation of differently-abled talent in Hollywood. Houlahan uses her strong following on Instagram to spread awareness and to help end the stigma surrounding mental health.

You can learn more about Sheila on IMDb at: http://www.imdb.me/sheilahoulahan

And, her production company:

About The Webby Awards:

Referred to as, “The Internet’s Highest Honor” by The New York Times, The Webby Awards are presented annually by the International Academy of Digital Arts and Sciences, a judging body composed of over 2000 industry experts and innovators. You can learn more by visiting: https://www.webbyawards.com/