Stacks of facts tumble over each other in the second edition of “What You Should Know About Politics…But Don’t” (ISBN-13: 9781611454758) by Jessamyn Conrad, and it would be an incredibly valuable book if it contained an index. Still, this is a fairly handy reference guide despite some notable lapses into placating the odious conservative fringe. 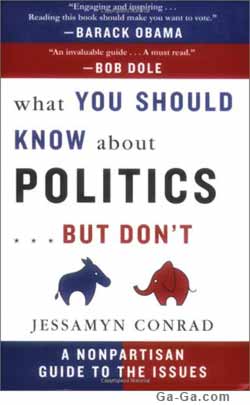 Let praises ring out for Jessamyn Conrad. No one else had the wherewithal to write something as all-encompassing as “What You Should Know About Politics… But Don’t.” In general, Conrad has accomplished the nearly impossible feat of explaining the ins and outs of the machinations regarding electioneering, legislating, politicking, and governing.

In addition, she tackles major flashpoints in today’s society, from conservatives waging cultural warfare on America while attempting to curtail civil liberties, to the genuine arguments over the economy, the military, energy, environment, education, health care, and more.

That being said, there are a number of difficulties with the book. The lack of an index is a horrendous lapse, either on the author’s part or because of penny-pinching by her publisher. Here’s hoping that forthcoming editions will rectify the omission.

There’s also a problem with one part of the book’s subtitle: “A Nonpartisan Guide to the Issues That Matter.” Yeah, it’s about that adjective, “nonpartisan.” The word shows up about a half-dozen times in the first three pages, yet that section concludes with her stating that “one of the things we can probably all agree on is that an engaged electorate is ultimately in everyone’s best interest.” Well, I agree. And every decent human being agrees. But members of the nation’s conservative cabal are pleased as punch to be dealing with an unengaged electorate because voters who understand the issues reject the CON job and vote for independents, liberals, or progressives. Unfortunately, low-information voters constitute the moronic base of the GOP.

Conrad compounds that error with silly lapses in judgment, as when she misidentifies the CATO Institute as a “think tank” instead of pointing out that it is simply a RWNJDB (rightwing nutjob douchebag) propaganda ministry. Yes, this is a very common error but in a book attempting to outline the state of today’s political scene you’d hope for something a little better than that.

She also mistakenly refers to the fear-mongering and genuinely disgusting statements of Ann Coulter and equates that quisling’s ranting with the beneficial muckraking of Michael Moore. That whopper occurs on the opening page of the book, presumably to pull in buyers from the Party of Stupid, but since they mostly cannot read, this effort seems unnecessary.

Fortunately, balanced against every silly pro-RWNJDB statement in the book you will find a half-dozen helpful sections and many cogent observations about today’s political scene. For example, there is an excellent four-page description of gerrymandering (including the derivation of the term), as well as a brief outline of some of the proposed cures for the practice.

On the other hand, there is no mention of the GOP’s gerrymandering that has resulted in the know-nothing/do-nothing party gaining control of the House of Representatives. And while there is a nice analysis of the problems with some voting machines in this country, Conrad avoids any details about the suspicious actions of one of the machinery manufacturers, the odious Diebold.

The book contains a brief section on campaign finance reform and has the good sense to mention Stephen Colbert’s lampooning of the irresponsible laws surrounding the use of Super PACs. But although the Supreme Court’s idiotic Citizens United decision is mentioned, Conrad is pretty namby-pamby about it.

She also makes another common error by using the misleading term “entitlements” when referring to earned payments via Social Security and general welfare payments via Medicare and Medicaid. This first occurs on page 35 and a fuller definition (“These programs are called entitlements because all Americans are entitled to them”) doesn’t appear until page 65.

Conrad shines in her description of the Occupy movement:

The fact that the government has chosen top-down intervention like bank bailouts rather than bottom-up intervention like renegotiating mortgages for individuals, joined with rising income inequality and a jobless economic recovery, created pressures that exploded in 2011 with the Occupy Wall Street movement, or OWS, in New York.

Unlike most people in what currently passes for the “news” business, Conrad understands that the media:

covered the Occupy movement more like a street fair than a serious political enterprise. In general, people who are involved with the Occupy movement think the way Wall Street and the government have handled the economy serves to increase the wealth and power of the few at the expense of the many….

Conrad’s approach works well with certain aspects of our political scene. Take her introductory paragraph in the section on some of our ideological groups:

Foreign policy is informed by ideologies that don’t necessarily adhere to clear party lines, so it’s necessary to understand something about the main camps that have fought for political control in the past century, including isolationists, paleocons, liberal internationalists, realists, liberal hawks, and neocons. Keep in mind that there are divisions within each group; for example, one ideological group may agree on outcomes but disagree on causes. But even these differences are important, because how you diagnose a problem informs how you propose to solve it.

Sadly, there seemed to be no mention of a subset of these groups — the chickenhawks — represented by such effluvia as Dick Cheney, Roger Ailes, Bill O’Reilly, William Bennett, John Bolton, Karl Rove, John Boehner, Jeb Bush, Charles and David Koch, Ted Nugent, ad nauseam. And while there are a couple of mentions of the war criminal status of members of the George W. Bush administration, this topic gets short shrift.

Sometimes merely citing the facts constitutes a strong anti-GOP message: “Indeed,” Conrad writes, “the United States is the only major developed country without universal access, or medical services provided to all.” Sometimes Conrad falls back on subtlety to the point of laughter: In discussing the right-to-die-with-dignity issue, she mentions the Terri Schiavo case and notes that “Some Republicans may have attempted to use the case politically.” Really? You’re going with “may have” in your depiction of the GOP’s disgusting behavior in that case?

Citizens Against Government Waste, a nonpartisan, nonprofit organization, compiled records showing that the fifty-two members of the congressional Tea Party caucus together requested $1 billion in earmarks during 2010… even politicians who are ideologically opposed to government spending are willing to bring home the bacon.

The racial animus and outright bigotry of conservatives pops up in almost every chapter but without an index it is difficult to track it or quickly look it up for further comment. And the racism of Rand Paul, currently mentioned as a potential presidential candidate (?!), is avoided. Hopefully, she will take a stand for humanity and decency in her other writing, especially once the GOP nominates one of their moral midgets for 2016.

There are front cover blurbs from the very middle-of-the-road Barack Obama and the old-school moderate RWNJDB Bob Dole, but nothing from indies, liberals or progressives. Obama and Dole proclaim the book as “engaging” and “invaluable.” Hmmm, not sure about that. Perhaps “a nice start” would be a more accurate statement. Until the third edition or a more accurate work comes along, this is the best guide we’ve got because it’s the only guide we’ve got.

VIDEO: Jessamyn Conrad discusses the first edition of “What You Should Know” on YouTube:

The post Book Review: ‘What You Don’t Know About Politics’ Would Fill a Book appeared first on MuseWire.