A modern-day horror story of how people in our financial system “fiscally raped us,” “The Big Short: Inside the Doomsday Machine” (ISBN: 9780393338829) is a fast-paced and fact-packed book made exciting by the superb writing of Michael Lewis.

The phenomenally successful Michael Lewis has written The Blind Side, Moneyball, Flash Boys, and Liar’s Poker, among others. In The Big Short, he brings his art and craft to bear on the twisted people and inept institutions that crashed the world’s engines of finance. 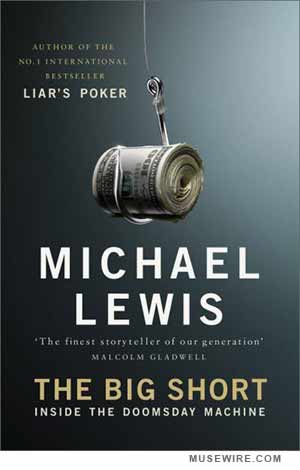 After the 2008 meltdown, if your retirement fund was lower than expected, if your property values took a dip, if you lost a home or a job, some of the reasons are explored in this book. The facts of the case were often almost impossible to follow, and that was deliberate. The goal was to bewilder. “By design they were arcane, opaque, illiquid…”

Overpriced bonds were not “expensive”; overpriced bonds were “rich,” which almost made them sound like something you should buy. The floors of subprime mortgage bonds were not called floors — or anything else that might lead the bond buyer to form any sort of concrete image in his mind — but tranches. The bottom tranche — the risky ground floor — was not called the ground floor but the mezzanine, or the mezz, which made it sound less like a dangerous investment and more like a highly prized seat in a domed stadium.

There was a lot more prevarication and persiflage in the scam because that helped these people plunder our financial system. As Lewis explains: “Financial markets are a collection of arguments. The less transparent the market and the more complicated the securities, the more money the trading desks at big Wall Street firms can make from the argument.”

So, let’s talk about the complicated stuff, something that Michael Lewis can do and still make things clear. There’s the CDS (credit default swap), a kind of insurance policy on groups of suspect loans that were bundled together to hide their weakness. But — they were not regulated like insurance. Firms dealing with them were not required to have capital in reserve to protect investors in the event of having the insurance called in.

But wait, it gets worse. There is also a CDO (collateralized debt obligation), “a security so opaque and complex that it would remain forever misunderstood by investors and rating agencies.” A CDO was essentially “a credit laundering service” and as far as Wall Street was concerned, “it was a machine that turned lead into gold.”

Today Goldman Sachs is, to put it mildly, unhelpful when asked to explain exactly what it did, and this lack of transparency extends to its own shareholders. “If a team of forensic accountants went over Goldman’s books, they’d be shocked at just how good Goldman is at hiding things,” says one former AIG FP employee, who helped to unravel the mess, and who was intimate with his Goldman counterparts.

While that subhead sounds like the name of a law firm, it actually describes Wall Street’s normal method of operation. Time and again, Lewis uses his expert writing skills to reveal the wrongdoing, shed light on the lawbreaking , and comment on the chicanery.

How did this economic pillaging take place? Well, consider what happened when the services that judge the value of financial investments or organizations took a look at Wall Street’s conglomeration of “credit default swaps” and “collateralized debt obligations” and “asset-backed securities” and on and on through the word soup. The formerly-respected ratings agencies Standard & Poor’s and Moody’s repeatedly blessed these pieces of crap with desirable grades, thus fooling everybody, including themselves.

Looking back, we see that nearly everyone involved in the scam walked away rich; many of the firms were bailed out and are even bigger today.

The specter of politics drifts in and out of the tale, most of which takes place during the dark days of the 2nd Idiotic Bush administration. There is a Republican aspect to the way Wall Street firms acted. They “disdained the need for government regulation in good times, insisted on being rescued by government in bad times. Success was individual achievement; failure was a social problem.”

Finally, here is Lewis writing about Steve Eisman, who was one of the first to profit from spotting some of the holes in our financial regulatory system:

In his youth, Eisman had been a strident Republican. He joined right-wing organizations, voted for Reagan twice, and even loved Robert Bork…. “When you’re a conservative Republican, you never think people are making money by ripping other people off,” he said. His mind was now fully open to the possibility. “I now realized there was an entire industry, called consumer finance, that basically existed to rip people off.”

Just think how much better the world would be if that kind of mental clarity occurred to lots of other Conservatives.

Buy this book right now on Amazon:
The Big Short: Inside the Doomsday Machine

This original review is Copr. © 2016 by John Scott G and first published on MuseWire.com before finding its permanent home on PublishersNewswire.com – both are publications of Neotrope®. All commercial and reprint rights reserved. No fee or other consideration was paid to the reviewer, this site or its publisher by any third party for this unbiased article/review. Reproduction or republication in whole or in part without express permission is prohibited except under fair use provisions of international copyright law.