Greed, bigotry, and treason head the list of “Why the Right Went Wrong: Conservatism From Goldwater to the Tea Party and Beyond” (ISBN 9781476763798), the generally helpful new book from E.J. Dionne, Jr.

Columnist and political commentator E.J. Dionne is too damn polite for his job. 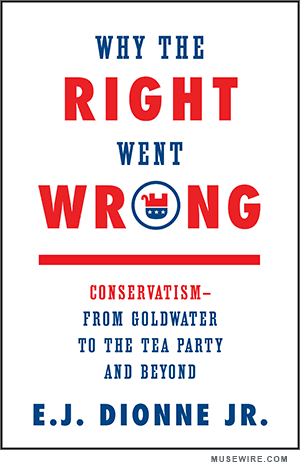 The erudite author of Our Divided Political Heart and Why Americans Hate Politics, Dionne covers a lot of ground in the pretty, pretty, pretty good Why the Right Went Wrong but he never really gets to the heart of the matter when discussing the open sore of conservatism.

For instance, he refuses to use the term “radical Christian terrorism” when delineating the actions of the GOP. And he takes seriously their repeated attempts to put lipstick on the rotting corpse of their ideology — the oxymoronic term “compassionate conservatism” is discussed on at least 50 pages of the book and although Dionne frequently mentions how illogical it is, not once does he point out that it is both anti-human and anti-American.

The same problem rears up its ugly head in his treatment of the right-wing’s fake research groups like Cato Institute, Heritage Foundation, American Enterprise Institute, and approximately three hundred others. This odious cabal is never properly denigrated for their constant efforts to create confusion through distortion, prevarication, and outright fabrication.

He does score some good points, as when he writes: “If social justice depends on improving family lives, improving family lives depends upon greater social justice. For some conservatives, embracing the second imperative will prove difficult.” But that namby-pamby approach is, frankly, disturbing. Why not conclude that observation with the truth: “For right-wing nut-job douchebags, embracing the second imperative is impossible.”

Come on, E.J., maybe it’s time to ‘fess up to being bought off by the forces of evil. It may not be a bribery situation as with the whores who bloviate on the Fox Fake News channel, but like most people in “the media,” he won’t tell the truth about GOP crypto-Fascists for fear of losing access to them.

Dionne’s oh-so-deferential approach extends to his descriptions of the subhuman creatures spewing the filth of conservatism. Here are a few examples:

* Current Speaker of the House — First of all, Paul Ryan’s nickname is Lyin’ but this is not mentioned. Second, this is a guy who cannot do basic math even as he promotes draconian budgets that would lead to an oligarchical society similar to the current Russian economic death spiral. Despite the plentiful evidence that Ryan is essentially a stool sample in human form, Dionne at one point calls it “an affable midwesterner with a sunny disposition” and “bright and affable” just 25 pages later.

* Odious propagandist — the bag of maggots known as Laura Ingraham is identified only as “a conservative talk radio host.” Which is a bit like calling Timothy McVeigh a conservative taxation protestor.

* Treacherous moron-majority spokesliar — the pile of excrement known as Haley Barbour is described as “the former governor of Mississippi and a Reagan-era veteran.” Which is like calling Benedict Arnold a soldier sympathetic to the Court of St. James.

On the plus side, there is his handling of Little Marco Rubio. Dionne treats him seriously, which is annoying, but at least he shows that this squealing RWNJ is simply a Ken Doll in a big boy suit.

No “Pro” to the CONs

Despite there never being anything worthwhile to emerge from conservatism, those who identify with this despicable cult keep pushing the country towards their programs no matter how harmful to the population as a whole. As Dionne writes:

Calling for an end to “government intrusion” and “excessive regulation” brings cheers — until an environmental catastrophe strikes, an unsafe product kills people, or an inadequately inspected plane goes down.

Standing out are several moments of clarity in the text. Here’s an instance: there are three pages dealing with the exact moment the Republican Party became a treasonous organization: the evening of President Obama’s inaugural address on January 20, 2009, when the GOP decided to put party over country and vote “No” on every Obama appointment or policy.

That putrid greedwhore Mitch McConnell is quoted as saying “We create an inventory of losses, so it’s Obama lost on this, Obama lost on that. And we wait for the time when the image has been damaged to the point where we can take him on.”

In other words, the Party of No is not on America’s side — they are only on the side of billionaires and multi-national corporations. It is sad that Obama trusted in humanity without noticing that humanity is something conservatives do not possess. In February of 2011, “House Republicans passed a budget bill that cut spending on Head Start, Pell grants for college access, teen pregnancy prevention, clean-water programs, K-12 education, and a host of other programs.” But they were in favor of cutting taxes for those making more than $250,000 a year.

Another example is Dionne’s explanation of some of the bigger fiscal failures of the GOP:

And then came the financial crisis that [David] Frum called the “epic disaster in 2008.” It discredited conservative economic doctrine in exactly the way the Great Depression had nearly eighty years before. Tax cuts had not shored up the economy…. The financial crisis of 2008 represented a wholesale rout of conservative ideas on taxes and deregulation.

But why are we not referring to these fiascos as the Republican Depression and the Republican Recession? I guess I’m alone in pushing for truth in labeling.

Evil Gets a Pass

Throughout the text, Dionne refers to “conservatism” without mentioning that it is nothing more than infected pus dripping all over the body politic. And as for the repeated acts of sedition and bigotry committed by Republicans in the Senate and House during the Obama presidency, Dionne is too often eerily reticent.

If a book on the political evil in our society fails to point out that conservatism is a pestilence that has yet to be eradicated, then that book must be labeled a failure. This is a well-meaning work, but a botched job nonetheless.

This original review is Copr. © 2016 by John Scott G and first published on MuseWire.com before findind its permanent home on PublishersNewswire.com – both are publications of Neotrope®. All commercial and reprint rights reserved. No fee or other consideration was paid to the reviewer, this site or its publisher by any third party for this unbiased article/review. Reproduction or republication in whole or in part without express permission is prohibited except under fair use provisions of international copyright law.