Demonstrating how the malignancy known as Conservatism has repeatedly poisoned the Supreme Court of the United States, “Injustices: The Supreme Court’s History of Comforting the Comfortable and Afflicting the Afflicted” by Ian Millhiser (ISBN: 9781568584560) is detailed, horrific, and important. 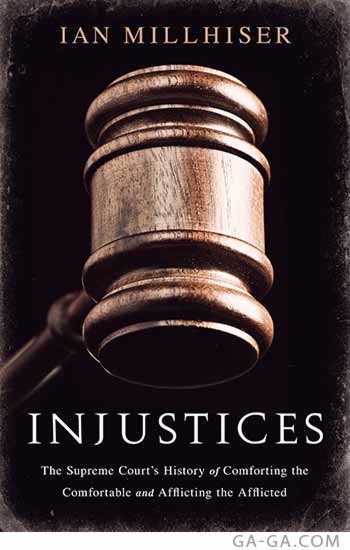 Millhiser has done the United States a great service with his book about the appalling history of bad decisions from the highest court in the land. As a plus, “Injustices” has one of the most spot-on sub-titles in all of modern non-fiction: “The Supreme Court’s History of Comforting the Comfortable and Afflicting the Afflicted.”

In many of the cases discussed in the book, Millhiser describes how the malicious rulings affected the men, women, and children who were faced with “miserly paychecks, deteriorating health, potentially deadly working conditions, and systematic efforts to render them powerless against their employers.” Time after time, the Court ignored the plight of the people and voted in favor of the trusts, the corporations, and the wealthy landowners.

Again and again, dreadful conditions were ignored or made worse by the nine black-robed injustices. “Sweatshops enjoyed the blessing of the courts. Children labored from dusk until dawn in the deadliest of factories.” Many of the details are shocking, revolting, and difficult to read. As one example, take the case of Carrie Buck, in which the Court allowed the State to mutilate her body. Yes, in these United States, land of the free and home of the brave, there is a horrible history of Conservative “thought” leading to stunningly stupid judicial action.

True, there have been a few bright spots in the history of the Court. Obviously, humanity is better off because of the results in cases such as Brown v. Board of Education (ending school segregation) and Roe v. Wade (affirming women’s reproductive rights). So, too, the populace is better served by National Federation of Independent Business v. Sebelius and King v. Burwell (both of which upheld provisions of the Affordable Care Act). And certainly the nationwide celebration was justified after Obergefell v. Hodges (in favor of marriage equality).

As good as those rulings were, they pale in comparison with the litany of evil decisions that Conservatives on the court have delivered in its history:

From backing racism to trampling on the rights of women, children, and workers, the SCOTUS has a dismal record. As Millhiser writes in his Introduction, “Few institutions have inflicted greater suffering on more Americans than the Supreme Court of the United States.”

It’s odd how the perfidy of Conservatism has remained a constant in this country. Their cretinism is continually exposed but vast numbers of Americans refuse to acknowledge it. At one point in the book, Millhiser writes about Cons denouncing the President “as either a communist or a fascist, or sometimes both in the exact same sentence.” No, this was not about Obama — in this case the President was Franklin Roosevelt.

Let’s try this again. Here’s a statement from the time when the RWNJs were embracing such human turds as Barry Goldwater and William F. Buckley, Jr.:

At least in the South, however, white supremacists did not need to control the Supreme Court in order to control their state’s policies — or the votes that their senators and representatives would cast in Congress. Democracy, it turns out, does not mean much at all if many of the voters cannot vote.

Yeah, sounds familiar, doesn’t it. Here is what has happened with the RWNJ turds on today’s Court:

Once George W. Bush was declared the winner of the 2000 election, however, and after Bush placed Chief Justice John Roberts and Justice Samuel Alito on the Supreme Court in 2005 and 2006, respectively, the Court’s concern for the “equal weight accorded to each vote and the equal dignity owed to each voter” vanished. With Roberts at the helm, the Court gutted the Voting Rights Act. It welcomed a flood of major campaign donations seeking to reshape American elections. And it aided what may be the most aggressive voter suppression campaign since the Jim Crow era.

“Injustices” is a blazing spotlight on some of the ways Conservatives continually cock things up.

If you value justice, decency, logic, and humanity, keep this in mind: Do not vote for Conservative candidates. Not ever.

This original review is Copr. © 2015/2016 by John Scott G and originally published on Ga-Ga, now merged with MuseWire.com – a publication of Neotrope®. All commercial and reprint rights reserved. No fee or other consideration was paid to the reviewer, this site or its publisher by any third party for this unbiased article/review. Reproduction or republication in whole or in part without express permission is prohibited except under fair use provisions of international copyright law.

The post Book Review: Supreme Injustice in ‘Injustices: The Supreme Court’s History of Comforting the Comfortable’ appeared first on MuseWire.