Naomi Klein reveals how the United States exports disaster capitalism in her powerful classic ‘The Shock Doctrine’ (ISBN: 9780312427993), a book that should be required reading for every government official and knowledgeable voter. 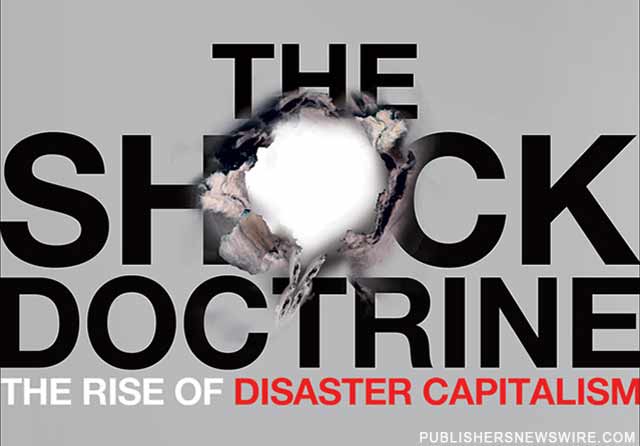 Whenever a crisis occurs in the world you can be sure that American corporations will appear on the scene. Not to provide aid or assistance but to extract money from the afflicted. It’s a time-dishonored policy that plays out on a global stage.

The Shock Doctrine is a white-hot polemic created in 2007 by Naomi Klein, author of No Logo and This Changes Everything. Piece by piece she exposes the greed and treachery of American-based multi-national organizations that typically work arm-in-avaricious-arm with republican politicians.

The process is as follows:

* find a crisis (political, social, or fiscal) and swoop in to institute an austerity plan

* invite multi-national corporations to the party

* sell-off anything and everything that cannot be tied down

Then, of course, the conservatives pontificate that this is an example of “free markets” or “spreading American values” or “Laissez-Faire economics” — they are certain to call it anything other than greed run amok. They then follow up by getting the conservative drunk tanks (Cato Institute, Heritage Foundation, American Enterprise Institute, Hoover Institution, etc.) to publish laudatory articles about it.

This fiscal rape of the populace has been carried out in South America, Asia, Africa, Europe, and the Middle East. It happened in Iraq after our most recent invasion and in New Orleans after Katrina.

Does this discussion make some people uncomfortable? Yes, because we hate learning that our great and good and true nation is often not too great or good or true, but Klein has got facts on her side: the U.S. has deliberately made things worse in the world and has done so time and time again.

Consider the results of our practice of catastrophe capitalism when disaster strikes:

* A natural calamity — one result will be the corporate takeover of public and private enterprise to increase profits at the expense of those who are suffering.

* An act of terrorism — one result will be the corporate takeover of public and private enterprise to increase profits at the expense of those who are suffering.

* A country’s economic collapse — one result will be the corporate takeover of public and private enterprise to increase profits at the expense of those who are suffering. 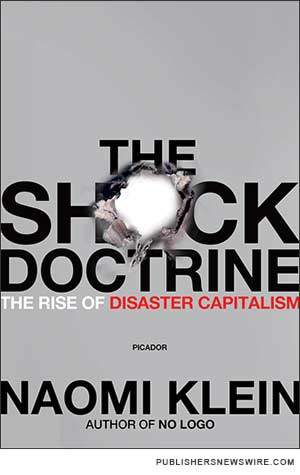 As Klein demonstrates, conservative doctrines are at the root of all this evil. The examples in the book are powerful and appalling. If Klein has a fault it might be that she goes into too much detail of the way our odious creation of crisis capitalism destroys human lives, often slowly over long periods of depression and soul-crushing poverty. But at her best, Klein lays bare the ugly future of the global economy in stun-gun style:

…an urban bubble of frenetic speculation and dubious accounting fueling superprofits and frantic consumerism, ringed by the ghostly factories and rotting infrastructure of a development past; roughly half the population excluded from the economy altogether; out-of-control corruption and cronyism; decimation of nationally owned small and medium-sized businesses; a huge transfer of wealth from public to private hands, followed by a huge transfer of private debts into public hands.

The chief villain here is Milton Friedman of the “Chicago School” of finance (which is correctly described as “economic genocide” at one point in the book), but there are many other soulless individuals whose sins are touched on, including: Donald Rumsfeld, Richard Perle, Dick Cheney, James Baker, Michael Brown, Paul Bremer, George W. Bush, and on and on in a horrifying litany of perfidy.

Wherever it has emerged over the past thirty-five years, from Santiago to Moscow to Beijing to Bush’s Washington, the alliance between a small corporate elite and a right-wing government has been written off as some sort of aberration — mafia capitalism, oligarchy capitalism and now, under Bush, “crony capitalism.” But it’s not an aberration; it is where the entire Chicago School crusade — with its triple obsessions — privatization, deregulation and union-busting — has been leading.

The reason for our terrorizing the globe in this manner is simple: we worship avarice. As Klein notes, writing at the end of the Era of the Second Bush Mistake, we have unleashed these greedwhores on ourselves and the globe:

As proto-disaster capitalists, the architects of the War on Terror are part of a different breed of corporate-politicians from their predecessors, one for whom wars and other disasters are indeed ends in themselves. When Dick Cheney and Donald Rumsfeld conflate what is good for Lockheed, Halliburton, Carlyle and Gilead with what is good for the United States and indeed the world, it is a form of projection with uniquely dangerous consequences. That’s because what is unquestionably good for the bottom line of these companies is cataclysm — wars, epidemics, natural disasters and resource shortages — which is why all their fortunes have improved dramatically since Bush took office. What makes their acts of projection even more perilous is the fact that, to an unprecedented degree, key Bush officials have maintained their interests in the disaster capitalism complex even as they have ushered in a new era of privatized war and disaster response, allowing them to simultaneously profit from the disasters they help unleash.

The Shock Doctrine is a towering achievement that contains strong warnings for our nation and humanity:

…today’s multinationals see government programs, public assets and everything that is not for sale as terrain to be conquered and seized — the post office, national parks, schools, social security, disaster relief and anything else that is publically administered.

Every progressive should read The Shock Doctrine; every conservative should have it read to them.

###
This original review is Copr. © 2017 by John Scott G and originally published on PublishersNewswire.com – a publication of Neotrope®. All commercial and reprint rights reserved. No fee or other consideration was paid to the reviewer, this site or its publisher by any third party for this unbiased article/review. Reproduction or republication in whole or in part without express permission is prohibited except under fair use provisions of international copyright law.