While it didn’t convert me to atheism, “The God Delusion” (ISBN: 9780618918249) by Richard Dawkins is still terrific and should be required reading for anyone who still thinks religion has any value in society.

I choose to believe in god. Some may feel this makes me the wrong person to review The God Delusion but hold on a moment: the atheistic arguments presented by author Richard Dawkins should be considered by any sentient being. Plus, they are consistently fascinating and presented in a friendly, if erudite, manner. 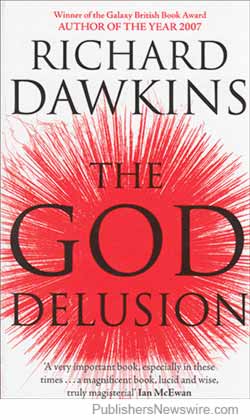 Dawkins’ philosophical points are even persuasive, up to a point, but I cannot join him in his non-belief. It is just too comforting for me to think that there is Something Out There, something beyond our plane of existence. And, as explained in the “Vengeful God” chapter of Secret Sex — and in many portions of the omnibook Area Code 666 — there is also a profound sense of relief in the idea that there will be a reckoning for the evil acts that people perform here on Earth.

Perhaps my intellectual abilities are not sufficiently developed to wrap myself around atheism. Here we are, trapped on this planet amongst millions of greedwhore corporatists, millions of intolerant religiosity freaks, millions of rightwing nutjob douchebags, and millions of fundamentalists who gleefully study modern weaponry but who can barely spell “I.Q. test” — and it is impossible to battle all of them all of the time. Therefore it just feels better to think that they will all be punished for their perfidy over the course of several eternities.

Religiosity is the Enemy

Many of us see the book as a discourse in favor of awareness, cogent thought, and reason — which would make The God Delusion less anti-god and more anti-religion. Right near the start of the Preface, Dawkins presents a litany of the horrors of religiosity:

Imagine no suicide bombers, no 9/11, no 7/7, no Crusades, no witch-hunts, no Gunpowder Plot, no Indian partition, no Israeli/Palestinian wars, no Serb/Croat/Muslim massacres, no persecution of Jews as ‘Christ-killers’, no Northern Ireland ‘troubles’, no ‘honour killings’, no shiny-suited bouffant-haired televangelists fleecing gullible people of their money (‘God wants you to give till it hurts’).

(As you can see, the book uses British punctuation and spelling.)

The main point for me is this: one can be against the terror of fundamentalists in Christianity and Islam (or any other cult) while still holding onto a belief in a higher power. Dawkins may think otherwise, but I feel it is possible to bemoan the chauvinism, condescension, cliquishness, hypocrisy, hollowness, and hate evidenced by the followers of religions while still accepting the possibility of other planes of existence.

And let’s face it: religiosity is a huge problem. “Though the details differ across the world, no known culture lacks some version of time-consuming, wealth-consuming, hostility-provoking rituals, the anti-factual, counter-productive fantasies of religion.” Agreed, but one can still believe in god as long as there is acceptance of the fact that it is not a logical choice.

Religiosity and belief in fairy stories often begins with the brainwashing of kids. This should rightfully be called child abuse, but that’s an extension of the argument.

If you are religious at all it is overwhelmingly probable that your religion is that of your parents. If you were born in Arkansas and you think Christianity is true and Islam false, knowing full well that you would think the opposite if you had been born in Afghanistan, you are the victim of childhood indoctrination.

There is a wonderful anecdote about Winston Churchill’s son reading the Bible for the first time and being amazed at the craziness of god and his followers. As Dawson points out:

The God of the Old Testament is arguably the most unpleasant character in all fiction; jealous and proud of it; a petty, unjust, unforgiving control-freak; a vindictive, bloodthirsty ethnic cleanser; a misogynistic, homophobic, racist, infanticidal, genocidal, filicidal, pestilential, megalomaniacal, sadomasochistic, capriciously malevolent bully.

No wonder conservative effluvia love him so much — he seems like their apotheosis, or at least an ideal republican political candidate.

While the book is often concerned with showing the absurdity of worshiping something that doesn’t exist, there are a number of other excellent points:

Taxing religions: The ridiculous tax exempt status of religious cults needs to come to an end. “The benefits of this to society would be great,” notes Dawkins, who points out that in the U.S., televangelists rake in funds “that could fairly be described as obscene.”

Dealing with religiosity freaks: Dawkins has plenty of great advice in the book, including: “I have found it an amusing strategy, when asked whether I am an atheist, to point out that the questioner is also an atheist when considering Zeus, Apollo, Amon Ra, Mithras, Baal, Thor, Wotan, the Golden Calf and the Flying Spaghetti Monster. I just go one god further.”

Combatting religious fanatics: “The genie of religious fanaticism is rampant in present-day America, and the Founding Fathers would have been horrified…. the founders most certainly were secularists who believed in keeping religion out of politics….”

Countering the ‘faith’ argument: “As long as we accept the principle that religious faith must be respected simply because it is religious faith, it is hard to withhold respect from the faith of Osama bin Laden and the suicide bombers.”

Odious right-wingers get their fair share of attention as Dawkins points out the parallels between fundamentalists of the Middle East and those in the West:

All the ingredients are there: slavish adherence to a misunderstood old text; hatred of women, modernity, rival religions, science and pleasure; love of punishment, bullying, narrow-minded, bossy interference in every aspect of life. The Afghan Taliban and the American Taliban are good examples of what happens when people take their scriptures literally and seriously.

The Bible Tells Me So

As a source of moral precepts, the Bible is a wretched book. The unnecessary bloodbaths alone should be enough to repel decent people, and its strangely contradictory stories display a hatred of humanity that is astounding. The subtitle of the Bible should be something like Self-Loathing Busybodies Tell Tall Tales of Horror. As Dawkins puts it:

To be fair, much of the Bible is not systematically evil but just plain weird, as you would expect of a chaotically cobbled-together anthology of disjointed documents, composed, revised, translated, distorted and ‘improved’ by hundreds of anonymous authors, editors and copyists, unknown to us and mostly unknown to each other, spanning nine centuries.

There are so many wonderful passages in The God Delusion that my review could continue for dozens of pages but let me conclude with this observation that appears about three-quarters of the way through the work:

Even if religion did no other harm in itself, its wanton and carefully nurtured divisiveness — its deliberate and cultivated pandering to humanity’s natural tendency to favour in-groups and shun out-groups — would be enough to make it a significant force for evil in the world.