Peter Schuck’s “Why Government Fails So Often: And How it Can do Better” (ISBN: 9780691161624) takes 30 pages of brilliant observation and crams it into 412 pages of text. His combination of garrulousness and impenetrable language makes it a very long and extensive and extended and elongated and lengthy and protracted and time-consuming and boring read. 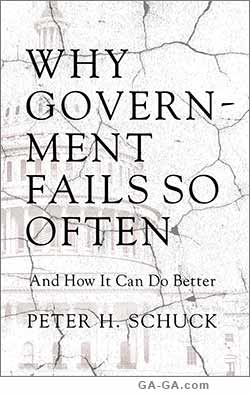 “The treasonous actions of republicans are a root cause of current government failure in the United States.” Unfortunately that truism does not appear anywhere in the long and mind-numbingly dull “Why Government Fails So Often” by Peter H. Schuck. That is a great title but it belongs on a different book because this tome is a failure on almost every level.

Things begin going wrong from page 1, where Schuck brags that this country provides civil rights for “racial and religious minorities, women, gay people, and the disabled.” We’re not even one-quarter of one percent of the way through this lugubrious word-stew of a book and the author has four wrong-headed assertions in one sentence.

On page 2, Schuck states that a “deep norm of tolerance leaves the Untied States as one of the few advanced democracies without a nativist or xenophobic political party,” thus completely overlooking the diseased morass known as Republicans.

Page 15 brings an idiotic summary of the Affordable Care Act, and by page 23 Schuck is in cloud-cuckoo-land as he blatantly lies about the odious Cato Institute and Heritage Foundation by erroneously referring to them as “think tanks.” Both of those may be tanks but they are of the septic type, not the cerebral.

Prevarication rears its ugly head on page 46 as Schuck counters modern history with a mush-brained description of the effects of minimum wage increases. Near the top of page 90 he makes the ridiculous assertion that US media is “opinionated but largely non-partisan” and then contradicts that point just four sentences later.

Although the author describes himself as a “political independent” and a “militant moderate,” it is clear from his writing that he has the standard-issue foolish misunderstanding of earned income payments or earned benefits. Like most RWNJDB (rightwing nutjob douchebags), he calls them entitlements or subsidies. Almost by itself this entitles his work to be consigned to the garbage heap.

The turgid nature of Schuck’s writing is something to behold so I will gleefully reproduce some of it for you. In this manner, you will know to run, not walk, away from this book whenever you may encounter it on the remainder shelves or in stacks ready to be pulped.

In discussing how normal procedural rules are not a substitute for policy effectiveness, Schuck writes:

This normative diversity makes it tempting to search for more cognitively and normatively manageable standards for identifying the criteria for assessing policies, and to find them not in substantive criteria but in less controversial process norms.

In considering the marketplace, he writes:

The pursuit of comparative advantage and scale economies among products leads to specialization of functions that engenders further diversification of skills, products, interests, and preferences.

In writing about how the unpredictability of future events weighs on people making policy decisions in the present, he states:

We must assume first that the government knows that this will undermine its credibility both in time 1 (because of others’ rational expectations about how government will act in the future) and in time 2 (when it actually changes direction) and, second, that it takes this credibility problem into account in deciding what to do. Nevertheless, a greater necessity — its obligation to voters in time 2 — demands that it do what the conditions then require.

Reaction to a great many of Schuck’s pronouncements will be severely limited to anyone who can figure out what the hell is being said in those ugly conglomerations of phrases.

Schuck suffers from diarrhea-of-the-mouth. (Or should that be diarrhea-of-the-word? Wordarrhea, perhaps.) Take this section that begins on page 51: “Cost-benefit analysis is the central tool of policy evaluation, but policy makers need some additional normative principles in order to guide its effective use. Here are fourteen such principles.” Yipes.

Schuck devotes the next 4,200 words to his list, some of which are bromides like “A program should maximize net benefits and also be cost-effective” and “Ending a failed policy is a kind of policy success” and “Policy assessment requires competent and objective assessors.” Well, duh.

The writer’s listomania continues throughout the volume: “The rest of this introductory chapter does five things….” “…I shall briefly mention here four more or less formal or structural elements of the institutional landscape….” “I focus here on ten elements of the culture….” “…consider four other sources….” “I organized this chapter around five different ways in which private markets interact with public programs…” (and then some of those ways are enumerated as well).

I shall briefly mention here five additional errors and idiocies committed by the author in this work: (1) Schuck’s anti-union sentiments are not well-disguised; (2) he totally misunderstands the problems the GOP caused in Michigan; (3) he mentions the GOP’s stupidity in quoting President Obama out-of-context without providing any context; (4) his explanation of the GOP-imposed problems at the US Postal Service is woeful; and (5) he refers to “recent reforms facilitating voter registration,” which will come as a surprise to the millions of people who are on the verge of being disenfranchised by GOP voter suppression efforts.

As that great philosopher B. Bunny was fond of saying, “What a maroon!”

Let me say right off the bat that I frequently work without a net; that is, there is no one helping me edit my work. But I really try hard to avoid the kind of thing that you find on page 213: “Widespread evasion of state excise taxes and other regulations — for example, on cigarettes, liquor, and other products — is widespread…” So, you’re saying something is prevalent, common, extensive, general, rife, or, um, whatchamacallit, oh, widespread? He also is fond of referring the reader to further discussions in other chapters, an annoying practice taken to an extreme when directing you to see Chapter 6 while you are reading Chapter 6.

Too Little, Too Late

While Schuck is obviously a regressive masquerading as a moderate, at least he has the decency to mention the “conservatives’ hysterical hyperbole” — although this occurs far too infrequently. On the plus side is his acknowledgement of “the short time horizon of almost all elected politicians” which means they are “caught up in a permanent campaign.” He does have a chapter on potential remedies for governmental failure, but this section is anemic, with obvious recommendations like the rejection of gerrymandering.

Here’s a suggestion: let’s have books and government documents written by people who actually know how to write. Or, as Schuck might put it: There should be widespread recognition of the underlying advisability of utilizing compositional expertise in the presentation of sentences which eschew obfuscation while as often as possible containing evidentiary material deemed necessary for the widespread communication of concepts.

For more information visit publisher site for this book: http://press.princeton.edu/titles/10192.html .

The post Book Review: Bad Writing is One Reason ‘Why Government Fails so Often’ appeared first on MuseWire.