Dieter Wiesner, Michael Jackson’s former manager and friend, had many voice recordings from the pop icon, and sought a way to share them with others. “Michael Jackson: The Real Story” (ISBN: 978-1732181397), co-authored by Wiesner and Jah and published by Kingdomedia, is the result of that desire. 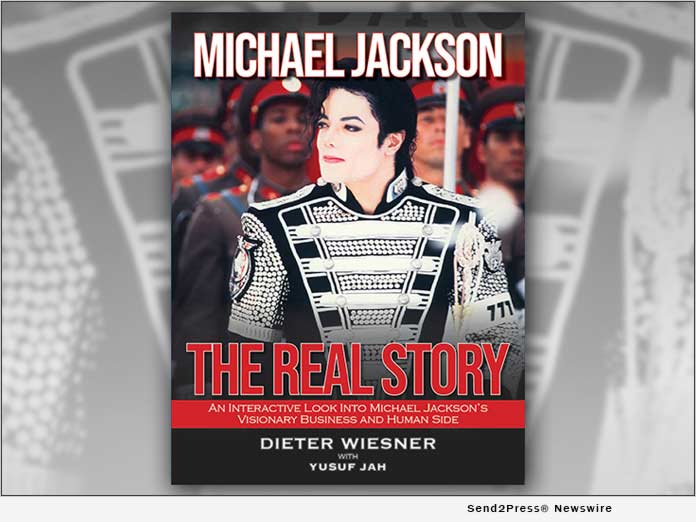 Dieter Wiesner, Michael Jackson’s former manager and friend, had many voice recordings from the pop icon, and sought a way to share them with others. He wanted people to know the real Michael Jackson. When he met Yusuf Jah, a published author, he was inspired to write a book where Jackson actually ‘told his own story.’ “Michael Jackson: The Real Story” (ISBN: 978-1732181397), co-authored by Wiesner and Jah and published by Kingdomedia, is the result of that desire. It gives readers a firsthand account of what Jackson was really like along with some astonishing plans he had in the works – plans that he hoped would change the world.

Through a series of narratives and numerous previously unreleased voicemail messages, readers and listeners now have access to new information that provides a deeper insight into the visionary, business man, father and family man. They’ll gain a greater breadth of understanding regarding what Jackson really hoped to achieve in what he thought remained of his life.

Wiesner’s collection of Jackson’s personal data is impressive. He spent years traveling and living with him so the information he has to share is invaluable in so many ways. He wants people to know Jackson the way he did.

“His memory, his legacy and his dear family all deserve to hear the perspective of someone who was around him and who he trusted within his inner circle,” Wiesner says. “He shared things with me that he shared with no one else.”

Thanks to publishing audio technology, readers will get to hear the “King of Pop” talk about everything from making business acquisitions and partnering with Disney and Marvel Comics to create a universe of entertainment that would rival any other. He wanted to see more people of color in the board room and hoped to inspire that to happen.

“Sadly, his life was cut short and he was never able to carry out these second phase-of-life plans that would have made him one of the wealthiest people on the planet,” Wiesner says. “His plans could have affected not just pop culture, but the world.”

In addition to messages about business ventures, the human side of Jackson is touched on too – the one that yearned to have a simpler life where he could do everyday things without being held accountable to millions. Going out for a pizza or sipping a soda for most are non-eventful moments. For Jackson, they were unforgettable.

“We hope this book resurrects the spirit of Jackson,” Jah says. “He’s no longer part of the physical world, but his passion and desire to implement change certainly is.”

“Michael Jackson: The Real Story” is currently available on Audible, Apple Books, Barnes & Noble and more. It’s available as an audio book, in print (with audio transcripts) and as an ebook.

Get a book preview and hear some of Jackson’s voicemail messages here: https://youtu.be/QydK7GP1JZg

Dieter Wiesner has more than 20 years of professional business and talent management experience. He provided merchandising for the entertainment industry including high profile clients such as Adidas, Nintendo, WELLA, Lufthansa, Uncle Sam, Coca-Cola and many others.

Yusuf Jah has co-authored several books including: “Fight the Power: Rap, Race and Reality;” and “Uprising: Crips and Bloods Tell the Story of America’s Youth in the Crossfire.” He is an educator in Los Angeles.