“Friday the 13th” has a passionate fan base that has been waiting for almost a decade for another installment. With the lawsuit between Victor Miller and Sean Cunningham still not resolved a new film isn’t likely for several more years, but Voorhees Films has a solution for your much-needed fix, “13 Fanboy.” 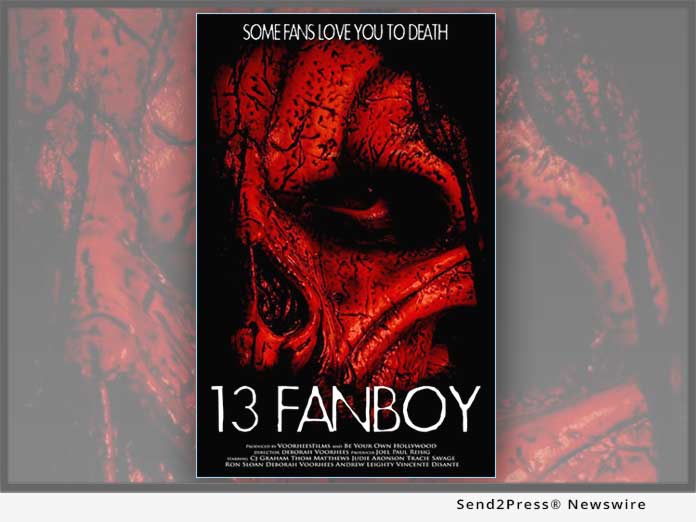 “Friday the 13th” has a passionate fan base that has been waiting for almost a decade for another installment. With the lawsuit between Victor Miller and Sean Cunningham still not resolved a new film isn’t likely for several more years, but Voorhees Films has a solution for your much-needed fix, “13 Fanboy.”

“Horror fans are the best,” says Deborah Voorhees, star of “Friday the 13th: A New Beginning,” and writer/director of “13 Fanboy,” “but every once in a while, you get that one that feels scary. I’ve received texts saying, ‘I’m watching you right now,’ or ‘wouldn’t it be cool if you were killed like you died in the film?'”

These experiences sparked the idea a year ago, when Voorhees met with veteran producer Joel Paul Reisig. The idea frightened her because “It was just so damn real.”

“After several sleepless nights, I realized that if it scared me this much, it would scare others too. I had been looking for a film for horror fans for a while. It just feels like it is the time for this film,” says Voorhees.

Together Voorhees and Reisig wrote the script, then gathered up some of the most popular actors from the original “Friday the 13th” movies including CJ Graham, Thom Mathews, Tracie Savage, Ron Sloan, Judie Aronson, and of course Deborah Voorhees.

“13 Fanboy” is not a Paramount film. This is a totally separate series, with no association to the original “Friday” movies.

“Our horror thriller brings your favorite ‘Friday the 13th’ actors back to the big screen in an entirely new horror series about a fan, who takes his love for the series too far and targets the real-life women from the franchise to kill them,” says Reisig.

For financing Voorhees and Reisig have turned to Indiegogo.

“The truth is, studios just were not interested. They think fans are not interested in the original stars,” Voorhees admitted. “But we know that our fans still love us!” With the success that Jamie Lee Curtis is currently having with “Halloween” it certainly seems that Voorhees is right!

Please visit their page to see a trailer and for more information: https://www.indiegogo.com/projects/13-fanboy

About Voorhees Films:
Voorhees Films consists of Deborah Voorhees and Joel Paul Reisig. Voorhees was one of the stars of the popular “Friday the 13th” movies in the 80s. Reisig is a veteran movie producer with over twenty titles to his credit.

Learn more about Deborah Voorhees and Voorhees Films at: http://www.voorheesfilmsproduction.com/about/