The Barbarians, The Vikings, The Goths, The Vandals, and The Huns are not just great names for rock groups, they were also terrific periods for artistic creation. Thanks to the 4-part DVD entitled ‘The Dark Ages: An Age of Light,’ you and your family can see the art they made while touring the world in the company of a very entertaining host.

“Mystery, magic, miracles!” says Waldemar Januszczak, your erudite and entertaining guide to the art and architecture of “The Dark Ages,” a 240-minute tour featuring wondrous images created by the Barbarians, Vikings, Goths, Vandals, Huns and various and sundry Islamic and Christian artists and craftsmen.

Bearing the contradictory subtitle of “An Age of Light,” this two-disc set brings you up close and personal with creations from six centuries of people seeking to conjure up their gods, or placate them, or honor them, or depict them. The four hour-long episodes were originally broadcast on the BBC and are now available for your classroom or living room. 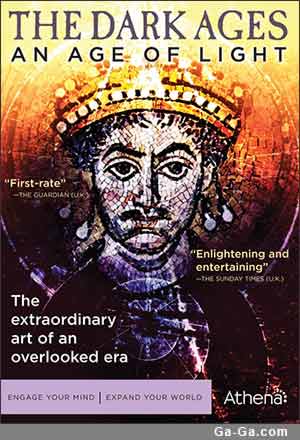 Januszczak is an exuberant host and it is easy to get caught up in his enthusiasm. “Runes!” he exclaims at one point, followed by “More runes! And still more runes!” He is obviously in love with the subject matter, but more importantly he wants to share it with you. He offers “a different way of seeing things, a different way of understanding — not just with your eyes but with your imagination.” And in more than one quietly exciting moment, you will feel transported and uplifted by the work offered in this wide-ranging series.

Often, there is humor in Januszczak’s presentation, usually just under the surface or breaking through in a quick turn of phrase. For example: “Later, when the Muslims were finally kicked out of Spain, a Catholic cathedral was plonked in the middle of the Mosque.” Yes, it sure seems as if he said “plonked.” Love it!

You have to admire a lot of the lines in his script. Like this one: “The Vikings who terrorized Dark Age Europe spent as much time creating their own stunning artwork as they did stealing it from others.”

Sometimes the humor is visual, as when he steps between the sun and one of the precious works of antiquity and we see his shadow as he flounces his hair a couple of times before quickly scooting on to the next historical tableaux.

Despite his name, Januszczak is British. Since 1992 he has served as the art critic of the London Sunday Times. At one point, he interviews a notorious art forger whose accent is almost impenetrable but there is never any problem with Januszczak’s speech — his commentary is very very very carefully enunciated (“THIS is where she was BURIED, in this BIG sarcophagus here.”) Not sure if it’s a Britishism but he pronounces “magnificent” as “maganificent,” which gives the proceedings a delightful Looney Tunes flavor every once in a while.

Actually, there is no denying the fun of many of the statements in the narration, like in this section: “The monasteries of the Dark Ages were Aladdin’s Caves of treasures — jewel-encrusted relic boxes, golden crosses studded with rubies and pearls — we live in a world in which Louis Vuitton luggage and Jimmy Choo shoes seem precious; in the Dark Ages, they knew better.”

“The first Christian art was filled with secret signs and hidden meanings,” he explains, and yes, he takes us through an illustrated explanation that enables one to view the art on multiple levels of appreciation. In fact, that’s the greatest value in this collection: you will look at artworks, buildings, icons, artifacts, and perhaps even all of history in new ways.

While the images get a bit on the grainy side in very low light situations, most of the excellent documentary photography is crystal clear. And it is downright marvelous at times, as when displaying the way sunlight is reflected throughout the Dome of the Rock in Jerusalem.

During the episode on The Vikings, you may be as amazed as I was at the intricacy and detail work in so much of the creations of “The Men of the North,” as they were sometimes called. And what about those silly helmets with horns? The Vikings never wore them. They were created for a production of an opera by Richard Wagner and the public — and editorial cartoonists — loved the look and have utilized it ever since.

As if the stunning images and entertaining host were not enough, the soundtrack is also quite nice, using every type of instrument and a great variety of arrangements to emphasize the era, the area, the art, and the emotion of each scene. The primary composer was Simon Russell, with additional work by Peter Mayne on a couple of the episodes.

Bonus outtake from “The Dark Ages” —

This original review is Copr. © 2013 by John Scott G. and originally published on Ga-Ga, now merged with MuseWire.com – all commercial and reprint rights reserved. No fee or any other consideration was paid to the author or this site by the publisher or any other agency related to the product reviewed. Editorial illustration based on DVD cover is Copr. © 2013 by Christopher Simmons.