Barton Swaim has done what every writer secretly longs to do: publish the unvarnished reality about his jerk employer. Too short to be called a tell-all, “The Speechwriter: A Brief Education in Politics” (ISBN: 9781476769929) is an interesting portrait of a stupid and disgusting Republican politician (as if there’s any other kind). 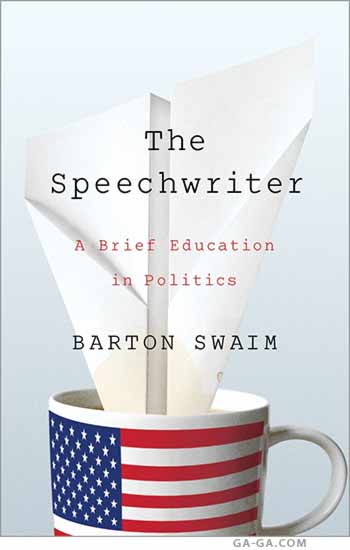 “I’ve wanted to kill him many times,” he said in a calm, almost soporific voice. “He’s a terrible person.”

That’s part of a conversation between two members of the staff of then-governor Mark Sanford of South Carolina. Far from being unhealthy, their attitude toward their boss is the logical result whenever a Conservative holds office. After all, Cons have nothing to offer people but canards, prevarication, and the made-up crap from fake research cabals like the Heritage Foundation and the Cato Institute.

But “The Speechwriter” mostly avoids the evils of Conservatism and its crackpot ideas. Instead, author Barton Swaim concentrates on the personal peccadillos of Sanford and some of the indignities of twenty-first-century political life.

You don’t want to be around a creature like Mark Sanford. Consider this description of his appearance while serving as governor:

Most of his clothing was in a deplorable state. He would not consent to have it dry-cleaned; his staff, and his wife, would occasionally have his shirts and trousers cleaned without his knowledge. He wore only one coat, a navy blazer with one or two missing sleeve buttons, and one pair of trousers, charcoal gray. Both had so many stains that, had they been of a lighter color, their filth would have been revolting. Once I saw inside the collar of one of his white button-up shirts; it was solid brown.

In between the squirming, the book also delivers some grins. And I was laughing uncontrollably at Swaim’s description of what he faced when trying to transcribe the governor’s dictated letters:

“This is a letter to what’s-his-name. Ask Jeane. Dear whatever, I just wanted to write and say I appreciated — whatever it was – he sent something, a box of pecans or something — I hope to see you soon down at whatever — he has a house somewhere, we were there last year. Ask Jeane. Please pass along a hello to whatever his wife’s name is. Take care. Sincerely.”

And Sanford’s “hiking the Appalachian Trail” fiasco, in which he used taxpayer money to leave the state for a tryst with his mistress in Argentina, need not be dealt with here.

Political language is often mealy-mouthed and Swaim provides some insight as to why:

The trick was to use the maximum number of words with the maximum number of legitimate interpretations. Put that way, it sounds terrible, but there’s no other way to do it. If a constituent writes to ask the governor the best way to get into politics, and you (in the governor’s voice) write back using words like “I think you should run” or “Go for it,” you may soon hear about some nitwit running for county council claiming he’s been endorsed by the governor.

Writers will appreciate Swaim’s description of one way pols are compelled to compose sentences:

So you would elongate every sentence with superfluous phrases. “I believe” would become “I have every reason to believe,” and platitudinous observations would be prefaced by “What I’d say — and I am absolutely certain about this — is that. . .” The phrase “going forward” was very useful, as was “from where I stand.”

Swaim also wrote bunches of letters to the editor on topics that were important to the sleazebag governor. You can’t just write one; you have to write at least a dozen of them on each topic so as to influence an editor to print one.

“It was a mind-numbing exercise; each one had to sound clumsy but not stupid; each had to approach the question from a different angle; and none could use the same vocabulary.”

The fake letters were then supplied to Conservative morons around the state who added their names and sent them to their hometown papers. It’s sort of a cretinous grassroots version of the American Legislative Exchange Council (ALEC).

Living the Lie of Politics

The sheer volume of topics facing a politician’s office is daunting, and a lot of things are not directly under the pol’s control. So they produce written or verbal statements that attempt to sound soothing but are often blatantly disingenuous. “Using vague, slippery, or just meaningless language is not the same as lying; it’s not intended to deceive so much as to preserve options, buy time, distance oneself from others, or just to sound like you’re saying something instead of nothing.”

This book will appeal to those who like having the curtain pulled back to reveal one of the nasty lowlifes in politics. And it will be a kick to every writer who has worked for boobs and jerks who want you to craft words for them but then take those words and twist them, distort them, mangle them, and denigrate them. In other words, every writer.

(2) Marshall Clement “Mark” Sanford, Jr., rightwing nutjob douchebag member of the Treason Party, left the South Carolina governor’s office in disgrace but the morons in that state’s 1st congressional district elected him to the U.S. House of Representatives in 2013. Stay classy, South Carolina.